Virginia key was about the only place I liked to kite in Miami. We lost it years ago and tried to get it back several times. Lonny and others finally succeeded but we can easily lose it again. This photo summarizes the rules.

We lost access to the state park you mentioned in the early 2000s. Since then we’ve lost access at many other state parks
Like Bill Baggs on Key Biscayne and too many others. Even though the density is low and it covers miles of beaches we’re out because that is apparently the way we wanted it?! The Rangers aren’t too friendly to kiters there I understand. 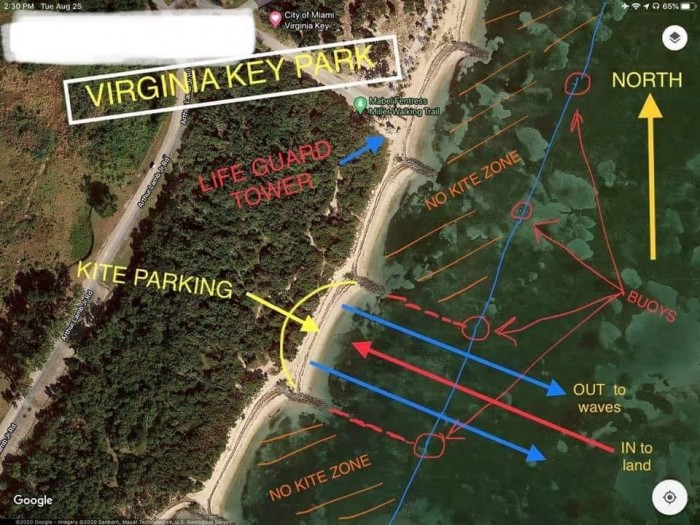 the rangers were pretty reasonable.. some folks had a few bottles of champagne open on the beach and they just politely mentioned that the glass is not allowed... the only weird rule is booting everyone out of the park at 5pm.. which is well before sunset..
the launch there is pretty sketchy BTW...
Top

Brand Affiliation: None
Has thanked: 38 times
Been thanked: 35 times

On Friday went to Crandon. They require IKO certification, and a “kiting membership” to kite on weekends. Cool looking spot, but since their instructors were booked for the weekend we had no way to get certified as step one. Did not even consider paying the $350/yr membership for the weekend.

So we drove up 10 minutes to Virginia Key and kited for free. Like Deniska and Rickl suggested, the launch is a touch sketchy for those who are used to wide open sandy beaches. Lots of smooth, rounded coral on the beach and in the water, a 3-5m sand strip that is nestled between two rock breakwater piers about 30m apart. Lifeguards were chill, but they do enforce the “stay out of the bouy boundary for bathers.” Reasonable people all-in-all. My girlfriend’s kite dropped when the wind fell to 9mph and she drifted in to the bather area. Lifeguards asked if she needed help (she was good) then kindly asked for us to take the gear back to the lunch corridor to get it untangled. All in all not bad, but the park closes at five though.

Today kited up by 87th Street. Made sure to be respectable and leave room, since we did not get the “streamers” from City Hall. No worries. I pulled in a kite that got entirely detached from a rider, I figured having it drift into a bather area would not be good. But otherwise no issues. Police were periodically patrolling the beach, no questions asked. Was a damn fine day today.

Wind shifts again tomorrow, might try Virginia key again, or head back to 87th. South Beach is probably a gamble without the streamer. Don’t feel the need to drive up to Delray or down to the Keys.
Top