My buddy’s kite that I did my first long body drag a couple miles from Avon north in the sound at OBX. Amazingly the bladders held and he could fly it. 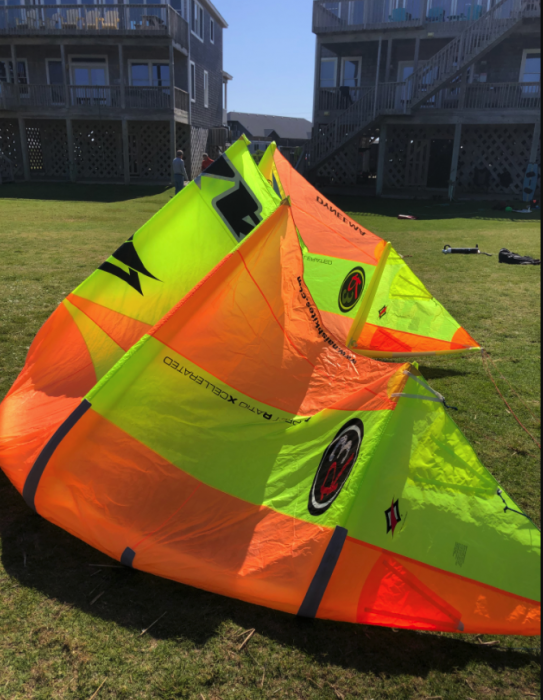 It looks in good shape.
I wonder if I should I pull out my 2002 16m Cabrinha Black Tip
Top

Click on the photo to see it right side up, sorry, don't know how to edit it.

Still felt crispy! I only ever flew it that one time, he flew it a few times. Has a variety of attachment points for the lines, and a strange "crossed" line system. Text on the kite says fly with 10-50m lines, the lines it came with feel like 30m. We think it was even supposed to be capable of being rigged for four lines.
Top

Brand Affiliation: None
Has thanked: 8 times
Been thanked: 1 time

Naish kite designer (at that time ), Don Montague was working on the switch from 2-line to 4-line. The 2-line bridle on that kite ( the first SLE bridled kite ) could be removed and it could be rigged 4-line, however the front line attachment point was a little too far aft & close to the kite's centre of effort for it to depower effectively. The Naish AR-5 addressed this problem.
Top

Didn’t the R3 has been released after the AR5 ?
Top

If memory serves me, Wipika came out with their first inflatable ( can't remember what it was called ), I think the only size they had was a 5m. Don Montague worked with the Leganoux brothers on the second design iteration, and at about the same time, Wipika came out with the "Free Air" in 5 and 8m sizes ( I had one of those in 8m size ) and Naish released their first kite, the AR3, which was identical in design to Wipika's 2nd design.

Or maybe I have it all wrong and the AR3 was Naish's 2nd design release, was their first kite the "ARX" , had the Naish skull and crossbones printed big on it. The AR5 was a full-on 4-line design, LE and struts made from Mylar that delaminated badly, I had a 7 and 9m of those too.
Top

No I think the ARX came after the AR3 and AR5, and was a better 4-line C-kite.

Who else was kiting back then and remembers these kites ??
Top

Who else was kiting back then and remembers these kites ??

But also second models like R3, Boxer etc came up.

Wipika's first "commercial" kite was I think FreeAir? Or Classic?

My first Wipika was an Airblast 8.4

Then I switched to North for Rhino2.
Top
Post Reply
21 posts