While wing foiling I was attacked by what shark experts (from analyzing bite mark) say was a 5-6 Ft Bull Shark.

The encounter happened weds May 26 at my home beach Wilmington NC - Figure Eight Island. Thankfully 8 weeks later it seems there is no permanent damage and I will make a full recovery, 23+ stitches lots of steri-strips. The attached pic shows the bite two days after being stitched up.

I was wing foiling with a 4 M Ozone V2 wing in good wind (15-20) with a lift 250 surf foil. Unfortunately, I had gone way out from the beach, about a 1/2 mile. I was just riding along when suddenly the shark attacked my hydrofoil, I fell abruptly and flipped in the water, saw sharks eyes and my foot in his mouth fought/kicked thankfully it released after first strike.

There was blood everywhere, I was surrounded by deep red water; adrenaline and thirst to survive kicked in ........ within about 10-12 seconds of the strike I got on board, got it flying and made it in quickly. Had to .... could have been fatal. Thankfully, despite blood spurting out of my leg with my heartbeat my leg worked enough to quickly ride in and get to medical attention from friends on the beach within 5 minutes. My wounds were being irrigated and stitched up within 30 minutes. I took cipro and doxycycline together to fight infection.

It was an incredibly fortunate escape ........... It's been deemed very possible by a few shark experts that the reason the bite was not MUCH WORSE and I was physically able to get on the board and go was because the leash peg coming off the cuff was down in the sharks gullet. I was using a heavy duty Dakine leash (pic attached) to connect the board to my right ankle, as we all do I had it tight so the cord was facing out, thankfully that unusually long peg coming off the cuff was pointed straight down in the sharks mouth.

I must still have something left to do in this life 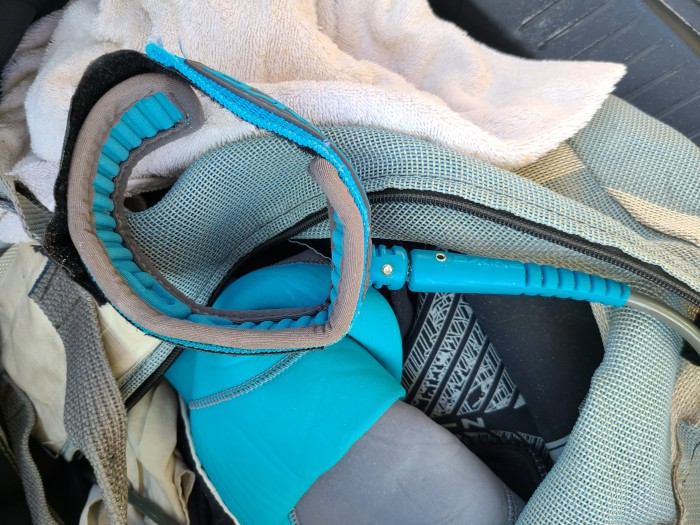 Heavy Duty Dakine Leash May Have Saved my Life 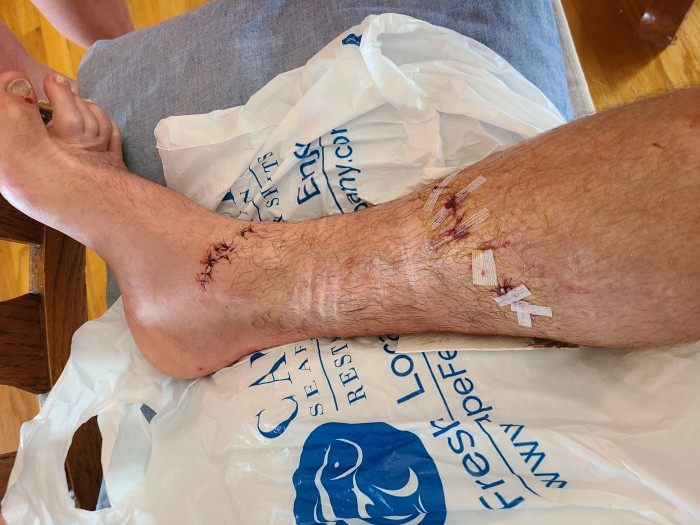 That's terrifying. Any theory as to whether the shark was actively attacking the foil, or if you happened to run into it?

Glad to hear you are on the road to recovery.

Happy to read you are ok! Could have been really bad as you mentioned.

You said the shark attacked your foil...but maybe you hit the shark?

Glad you are Ok! Once the wound is healed you can show the scar with pride

GNARLY man Glad you are OK and recovering!

I personally think a shark less likely to bite if run into by the foil, it would most likely dart away first and then probably just go away.
More likely this shark was already in chomp mode as the op says , attacking the foil first.

where did it happen?
Top

Thanks for sharing. But I'll think of this post literally every time I'm on the water now. Just ordered a sharkbanz...anyone think they work? Seems like they could just as easily attract them in out of curiosity.

Wow, that's quite a story. I'm sure everyone thinks about sharks whenever they need to body drag for their board in the ocean, I know I did this weekend in Cape Hatteras, and always do in Cape Town, yet shark attacks on body dragging kiters are unheard of to my knowledge. Having the foil in the water might indeed change the equation from the sharks perspective. Metal or carbon foil? And how do you know it was a bull shark? From the bite and tooth impressions?

Hope you recover quickly and get back foiling soon. Bull sharks are notoriously aggressive, just after great white and tiger sharks. My shark bite is nothing compared to yours (got bit on the knee by a small blacktip, no stitches). When I tell my story, I say "after three days of pain and suffering, the shark died".

Wow, glad you made it out ok!

I remember seeing this doco a while back, which continued with the expert trying to figure out why it happened. IIRC his conclusions was "bull sharks are just real big jerks".