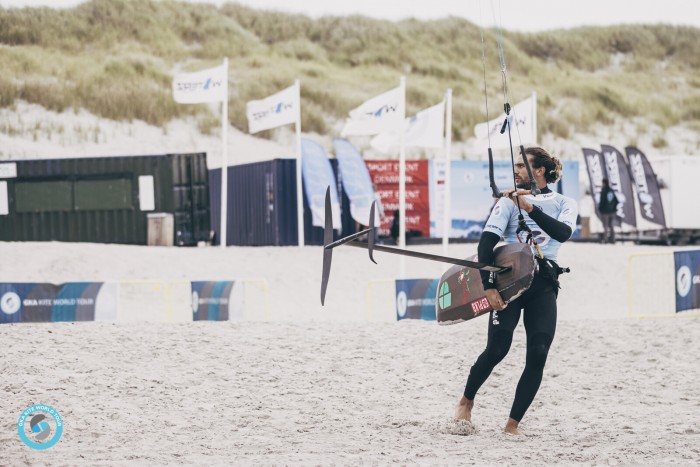 It was an early start for the crew and riders at Hvide Sande today with the skipper’s meeting taking place at 8am. The wind forecast had been looking optimistic, however upon arrival at the beach, the weather was overcast and the wind was not yet suitable.

Juan Antonio Aragon, the GKA race director, kept everyone on half hour calls, but by 6pm, when the wind failed to materialise, the competition was called off for the day. The riders remain positive, knowing how this location can change fast, and when the conditions are good it is a true paradise.

With four days of competition remaining, the focus is firmly on the upcoming forecast, which will allow us to run the contest as soon as there is a suitable window.

Whilst the athletes were waiting to spring into action, the live-stream crew were busy preparing the LIVE news show which took place from 10am to 11am. Today they were joined by Matchu Lopes and Francesco Cappuzzo for live interviews where they discussed the local spot, travelling challenges during the pandemic, tour life and much more.

Matchu Lopes gave a great insight during his live interview, on what keeps him motivated after so many years on tour. The competitive spirit and drive between the top competitors is a key element.

“I’m one of the few riders who has been on the GKA tour since the very beginning,” said Matchu. “Seeing the progression, and now being here in Denmark, seeing this battle for the title between James, Airton, Pedro and myself also in the mix, is really impressive. After almost 14 years competing it really keeps me motivated. Seeing the focus these guys have, like James, the way he trains, the way he prepares himself, how he looks at the other guys in the water, it’s motivating and intriguing. It keeps me motivated now when I’m at home, it helps me push myself, and improve the things I’m not so good at, such as power, height, and now I’m really pushing for that. Thanks to these guys, we are all pushing each other’s progression. We’ve gone from front rolls to board offs and now kiteloops with multiple rotations, more height, power, tough landings, breaking a board per session, it’s tough and you’re taking risks in every session.”

For Francesco Capuzzo, he explained to us how he has already been at the spot here in Hvide Sande for 10 days, and has had some amazing kite sessions.

“This is my second time here in Denmark. I first came here two years ago to Klitmøller for a windsurf event,“ explained Francesco. “I’ve been here for ten days now training with James Carew and Airton Cozzolino. We had some really good days with 1.5 metre waves and side-shore wind. The spot is amazing and I know I can do really well here. Hopefully we will be able to score these kinds of conditions later in the week.”

The focus now shifts to the coming days, particularly from Friday onwards where the forecast is looking more promising. The skipper’s meeting has been called for tomorrow at 9am.

Be sure to tune in once again tomorrow morning to the LIVE show at 10am CET.