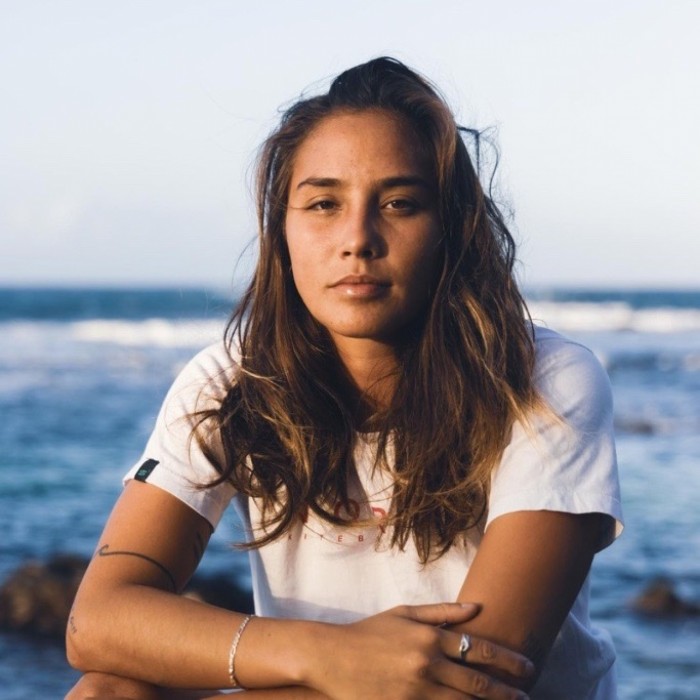 What do I love most about kiting? The flying part. I like being in the air. It's an expression of myself. I feel like I don't really have a lot of words, or I can't explain things sometimes, which frustrates me a bunch. But through these sports, I can express myself without words. I'm showing everyone what they need to see." - Karlie Thoma.

"I like doing things that are scary because it puts me in the moment more. I'm not sure where that comes from. I think I've been like this since I was a kid, a daredevil, doing intense stuff. I don't really feel very present in my day to day - I feel more focused when I'm surfing or doing a crazy mega loop; I'm very dialled-in. More so than in my normal life. And when I put myself into 'scary' situations, I am super-humbled. When I fall, then come up, I'm like: "Holy, I'm good. I'm alive; this is great.”

"In the last five years, it's just been injury-surgery, injury-surgery, or double surgeries. So right now, I finally feel like I'm coming back like I'm injury-free. It's been a long time coming to get to where I'm at now."

"I don't really believe [being a pro-kiter] is my reality yet. I know it is on paper, but I'm still trying to accept it. I was so young when I started kiting, I didn't know how to take it to the next level, and my family wasn't really involved in it, so it was kind of like a hobby. When I was 19, I got my real estate license. I thought I would just work a regular job for myself and make money. Being a professional athlete wasn't even a consideration. I thought it was long gone.

"I am a free-rider. I just want to progress, keeping everything interesting, exciting and fun. I'm not sure if I can push to the level that they're going at King of the Air, considering that I don't really want to die or get to a point where my limbs give out! I'm taking it super slow. I just want to get better at Big Air on my own terms and safely send it as much as possible."

Karlie’s newest trick is a front roll – fish pull – megaloop, but she’s up for any big jumps with a loop. When learning or mastering a trick, she tries to visualise beforehand. “Then I try it, then I get really, really slammed in the water! It helps when someone takes a video because I can see whether I've been taking off too early, sending the kite too late, or the rotation needs to be a little later. So just kind of like dialling all that in together.”

The 24-year-old grew up in Maui – just one beach from Jesse Richman. She spent most of her adolescence down at Old Man's, blasting around on her kiteboard every day after school. "I'm super grateful to have grown up here on Maui, with the conditions that I have here - wind and waves all year round, and the people that I'm surrounded by."

At first glance, you'd think she was another uber-talented local Hawaiian kid, with the ocean running in her veins. But unlike many of her generation on Maui, Karlie's parents weren't into water sports or windsurfing. "My Dad's from Germany, and my Mom's from the Philippines. With those two different cultures, being in the US and, more specifically, Maui, it was quite an interesting upbringing. Mostly, people think I'm Hawaiian, but I'm not."

When Karlie was eight years old, her Dad rented a room in their house to a couple of Swiss kitesurfers for the summer. "I think I went with them to the beach one day, and I was like ", whoa, this is so cool! I wanna learn! So they did some sort of exchange with my Dad, teaching me to kite in return for a discounted rate to stay. We went right away to the local shop because I needed a super small kite - I was tiny. So, we got a 3m kite, and then I basically spent all my time at the beach. I was the only kid on the scene – Jesse was super close, like right around the corner, but you kind of just stay in your zone. All the kids surf around here, but kiting wasn't really a bit thing back then – even now, there's not a lot of young kids doing it, so I was surrounded by like 30-year olds and up. That was my squad."

Her passion for surfing started when she was around 16. "I love it so much! Many more variables go into getting better as a surfer, like if the swells are hitting correctly or if your equipment isn't good, or people burn you on waves. Kiting is super consistent, and you can really take it to where you wanna go. But the further I wanna go, the more taxing it could be on my body.

"I think it's sort of like everyone's dream to start surfing with a kite. I've spent a couple of winters on the North Shore, but I'm still trying to perfect things - like where to park the kite when I'm going down the line. I haven't found it similar to surfing in any way, but once those two things connect, I think it'll be more fun. Definitely, this winter, I'll be out there!

Karlie’s advice for other girls who are into kiting or watersports or want to be is that you must be persistent and really want it. “The progression doesn't come without it. It's not like a soccer ball – you kick, and it's done. You need to really want to do it.”

Karlie knows a thing or two about tenacity, having undergone four shoulder surgeries after dislocating her shoulder. "My first set of surgeries was to repair the tendons, but they ended up tearing again. In the second round of surgeries, I had a bone block. I have screws in my shoulder, so now, physically, it can't dislocate anymore. But I definitely have some fear around it still. Also, between those shoulder surgeries, I punctured through my knee cap. I was in physical therapy for three weeks, trying to bend it and learn how to walk again. That was a little setback. But right now, I think I'm the best that I've ever been in my whole, like 14, 15 years of kiting, despite all the injuries and surgeries. I don't know what switched in my brain."

Underlying her desire to overcome fear and keep going is a strong belief in herself. "I know I can do it. My fear is not being able to do it. It's kind of like a double-edged sword because I'm scared that my body will give out; I'm going to get hurt again, and I physically won't be able to do these things. But then also I know I'm capable of getting to where I wanna go (if my body will hold up). I like getting better at things - I feel like that's my purpose."

Karlie believes the ocean is a form of therapy and being engaged in what you do helps put her "in the moment". Neuroscientists have called this a "flow state" or "blue mind", and it has been shown to have incredible effects on our wellbeing. At this moment in time – with the pandemic and so many people struggling with their mental health, it seems more relevant than ever for us to be turning to the ocean as a form of therapy.

“The pandemic didn't really affect Hawaii so much. I think there was a lockdown at the beginning of it in March for like two weeks. But after that, everything slowly opened up. For me personally, I haven't really felt affected by it. I stayed on the same program that I've been on for a long time, other than, you know, going to the store with the mask on. I can't imagine what some people are going through out there. I know it has changed a lot for people around the world. I've been seeing many more people on the ocean, and definitely a lot more people coming to Hawaii and realizing that there's more to life than a concrete jungle. It makes me super happy that people are going in more of that direction now, like taking life more down the organic route.

Keep an eye out for Karlie at her new spot at home in Maui, Pro Pool, when it's blowing 25knots +, or on her latest blog-style video series on YouTube where she'll focus on kiting, surfing and being as active as possible while documenting the process."