Thought id stick some pics up of my efforts. its taken a year but got there in the end and she works well. just need some decent wind and tide combo again.

thanks for your your input and sharing knowledge, it helps with the motivation for going down this road. 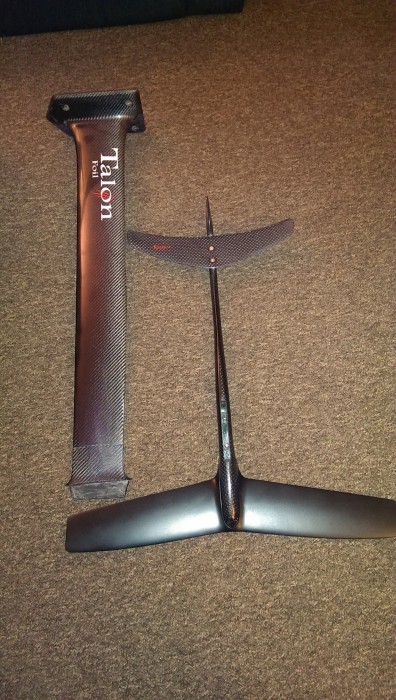 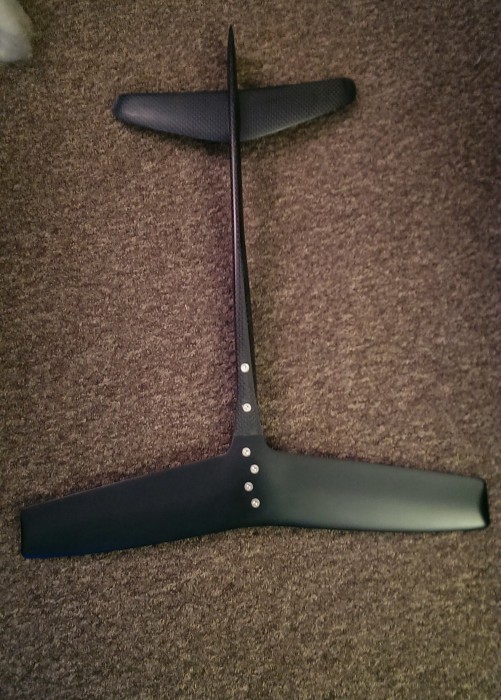 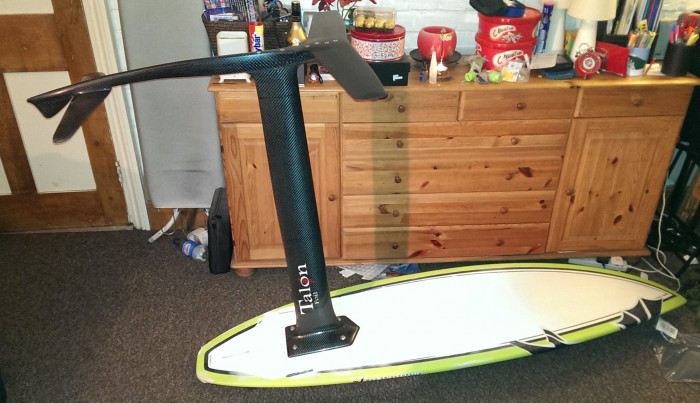 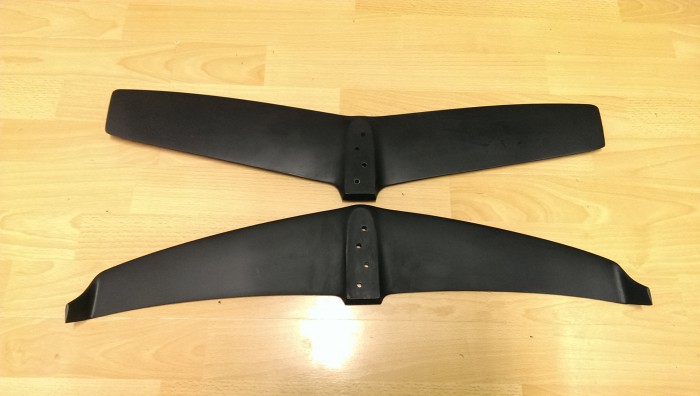 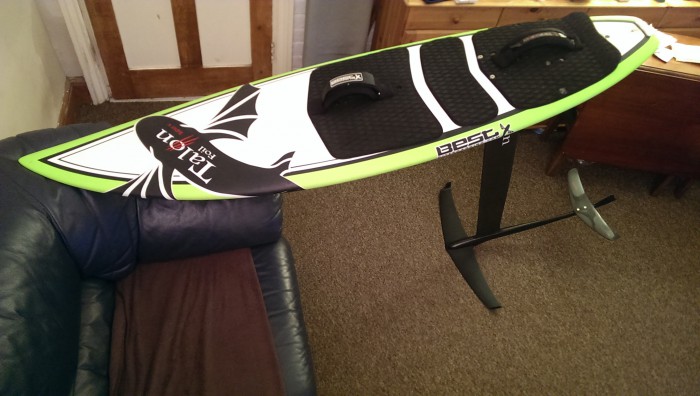 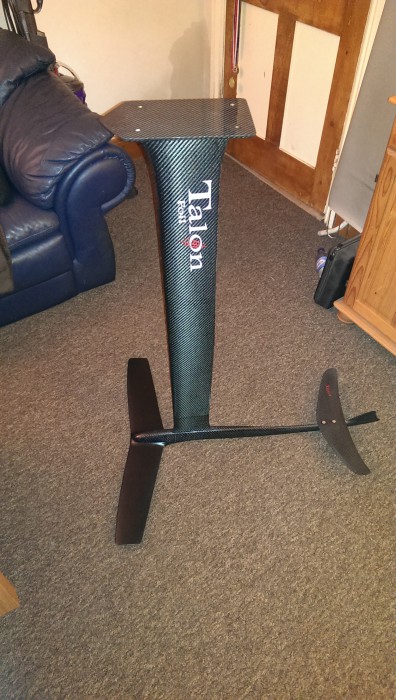 Really professional looking job - congrats! A couple of things I'm curious about... First, I see the front wing finish does not show the carbon weave, but the back wing does. Why is that? And second, what made you choose to have the front wing swept forwards? The only other wing I have seen like that is the Horue windsurf foil. I'm curious to know what kind of a difference it makes.
Top

Questions?
Where did you get the forward swept F wing idea? Looks interesting
Winglets on the other F wing, nice anti vortex touch.
Which F wing do you like to fly better?
Inverted R wing profile? any - A O A added to trim?
Nice to see the bibias outer strut lay up, off set 4 hole pattern, vertical tail element, streamlined tail set up, ect....
I can see MANY; MANY hours of work!!
R H
Top

Looks really good. From experience, even slightly forward swept wings will lead to a twitchy roll feeling. As a wing loads up, the tip flex up causing a higher AOA for the wing tip further loading the wing. I could never get mine to fly smooth even with 2 degrees tip washout. Maybe yours is stiff enough to limit this.
Top

This is close as I got to a stable forward swept wing. I still had to sweep the tips back. 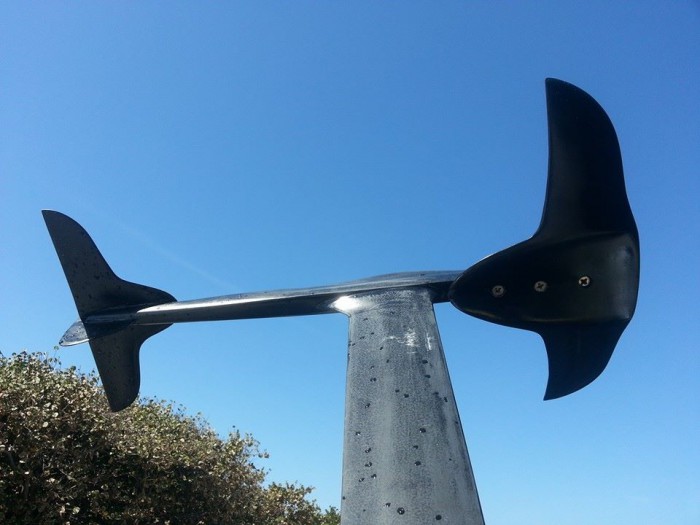 First off thanks for your comments, its been a lot of work for sure.
So to answer some of your questions, here it goes

A year ago i decided to build a foil. i wanted to make something a bit different to the regular shaped wing, so i started looking at nature. After looking at many pictures of birds ( not the bikini type, although they did pop up from time to time

) i noticed in many Soaring birds like the Condor, Eagles, Gulls and some Falcons that when set, their was a large part of their wings that were swept forward.
i then started to look at the advantages of forward swept wings. They are also used on a couple of fighter planes like the Grumman X-29 and the Sukhoi SU-47.
i found that the advantages were reduced drag and high stall angles. being forward swept it encourages flow towards the root of the wings rather than the tips. as the larger cord of the wing is towards the root this also helps with higher stall angles. this is not so important for us but the reduced drag could be.

i decided to go down the Pattern/mould route, after much much sanding shaping and finishing i had the patterns including two FSWs. i made the moulds and started to make full infused carbon strut, fuselage and rear wing. i i made the fus and rear wing with a Twaron skin to help tensile durability and abrasion resistance. i also made one half of the front wing but then had an idea to make a usable pattern. this was a lot quicker and an easier way to make a wing to try out my idea.

I used two kiterace carbon composite kite race fins. i set them at a 2 deg dihedral angle to help stability and yaw. i shaped a hydrofoil profile on the underside and also wanted to still further add something to the tips to help reduce wing tip drag. after quite a bit of research i decided to use Hoerner tips.

Dr. Sighard Hoerner was prominent aeronautical engineer involved in designing a high performance wing tip for use on Navy fighter planes. by using an up swept tip it was found to be more efficient in shedding high to low pressure induced vortexes. this intern reducing drag, and is still being used in modern aircraft today.
the idea i had was to try it out and if it worked to produce a mould from the wing and make a full carbon wing. this wing has a surface area of 550cm2 for light wind use.

my second rear swept wing has an area of 450cm2. after much research i decided to add winglets. these are foil profiled and set at specific rake, cant and AoA angles, they also are very good a shedding weed.

i used windsurf race fins for this one and set it at a 2 deg Anhedral. and it cost £70 for two new fins!!

So the first test! at this time i had not made the second wing as i could not wait to try the FWS wing also i wanted to know if it held together.
Well it was unbelievable, once i found the correct speed it just rose up smooth and steady it was bang on. its upwind angle was just crazy and i had more trouble getting used to the speed running off the wind than Anything else. wind speed was around 8-10mph i was ecstatic. she was smooth stable, quiet and fast. not only that it did not break! or show any signs of fatigue, bearing in mind me plus board was over 100kg.

i have now made a mould of this wing and will be making another wing with it, with a surface texture that im trying out to reduce parasitic drag by aiding laminar flow. this way ill have two wings with different surface textures, so ill be able to see if it makes any difference or not.

the second wing i have tried once, but i was rushing to finish it before our session and did not check its AoA. on riding her she rose ud to about 10" and stayed there. after inspection i found the AoA was near minus. i have since corrected this and looking forward to trying it. i did notice while i was up, it was very smooth and quiet also.

so that is my home build story, i did have the idea of selling a couple to friends just to get some money back on my materials. after all this work and expense i now just want to enjoy riding her, have a break and get back spending time with my family and not down in my Lab

dlprince69 wrote:Looks really good. From experience, even slightly forward swept wings will lead to a twitchy roll feeling. As a wing loads up, the tip flex up causing a higher AOA for the wing tip further loading the wing. I could never get mine to fly smooth even with 2 degrees tip washout. Maybe yours is stiff enough to limit this.

it will work fine, i dont know how you made yours but it needs to be either full carbon or mixed with glass and using ud carbon layed in the correct orientation to work for you. this will reduce the tendancy for the tips to curl up when the load increases.
Top

great job mark... will you build me one? please. I got a case of Canadian beer here with your name on it for you. JK

looks real good and can't wait to foil .. keep up the great work I know you have spent many many hours on it. trust me I know ..... hr after hr after hr.

the only thing you need to do is stop riding a flying pecker and make yourself a real foil board.
LOL
terrie
www.jellyfishboards.com
Top

That is anything but a Frankenfoil!!!! Beautiful craftsmanship. I know deep down I'm far more likely to buy than build, but you guys are inspiring.
Top

cant wait to see your Hard work in the black stuff

Dont Worry T, i told you i have a plan.... That Peckers going to have Teeth