Latest.... 1400x380mm
No concave, designed for speed and jumping with 34mm intermediate rocker.
Skipping the concave this time to see if I like a bendy board better!
Off to the printer now to get an A0 sheet printed again

Cool!
The trick with flex is to achieve minimal rocker (but not negative rocker) under typical riding conditions.
This means you would typically have a lot more static rocker than a stiff board.
Also, the main bend should be between the footstraps and the tips straight, like the Nobile 666.
Just some thoughts..
Top

rynhardt wrote: ↑
Sun Apr 15, 2018 5:38 pm
Cool!
The trick with flex is to achieve minimal rocker (but not negative rocker) under typical riding conditions.
This means you would typically have a lot more static rocker than a stiff board.
Also, the main bend should be between the footstraps and the tips straight, like the Nobile 666.
Just some thoughts..

Interesting discussion on flex and also on positioning of rocker.
I've been inclined to have a smooth but increasing rocker curve towards the tips and I know this puts a bit more drag on the tips area but it's also the area most responsible for lifting the board up off chop in the front. Assuming I need a certain total rocker, it's nice to keep the front part drag free and out of the water which is what that increase does, at least on the toeside front portion.
I've also considered asymmetric rocker on toe side vs heel side but the ramifications haven't gelled in my head quite yet.
For the flex results I'm not sure I'm understanding your intent from your words?

In the ideal world there would be a piezo powered microcontroller coupled to an internal WOO type motion processing unit with front and rear cameras, fluidic amplified piezo-fluidic valves controlling active bend of the board and the board would be a live thing. Maybe some shape memory fabric too.

With our currently implemented kiteboard technologies we are only looking at passive technologies. Fibre orientation, stretch, compression resistance and loadings under varied conditions.
For lawn mowing in low chop conditions flex mostly only changes the rocker according to rider weight.
For landing jumps, it's about deflecting a lot of water.
For skipping over chop, it's going to reduce a bit of that back leg work in compensating for rapidly changing heights.
For actually increasing rocker at the front to lift over chop I'm not nearly so sure? If a wave is already cresting over the tip of the board then you will wear it over your feet and ankles, it's going to affect your riding negatively. To be responsive, the board has to alter flex in response to the changed surface areas loaded in a wave trough vs a flat or a peak.
For carving into a jump or being overpowered it's a bit like being a heavier rider. End flex will result more in tail flex because the front is only partly submersed and therefore less reactive. Midflex will increase carve too, but the mid-flex area will have a greater influence in lifting the front over chop which is a good thing.
I still have some things I want to try that are utilising passive technologies, some requiring some careful control of infusion materials and boundaries, some with symmetric boards that react differently on leading and trailing edges. It's only a hobby at the moment though so my resources are limited

Thinking it through as above, I'd agree and favor more mid flex than end flex.
Footstrap position would have a huge influence on where that flex occurs too!
Top

The old style rocker with lifted tips and flat centre is probably the most inefficient shape you can get. In wakeboard terms it's essentially a 3 stage rocker.
And in terms of lifting the leading tip over chop, it's even worse. For the same angle, the earlier you can start the lift, the more height you get (green vs red lines below).
Alternatively, lifting earlier for the same height achieved would require a smaller angle, which is more efficient (less rocker angle).

If you have a flexible board and you want a minimal rocker under load, then you need to compensate for the amount of rocker you lose when you add a load by increasing the static rocker.

Have a look at the Nobile board below. Even though the rocker looks massive on the picture, as soon as you add the rider's weight and load against the kite, the rocker flattens out.
They call this a hydrodynamic rocker line. It works really well. 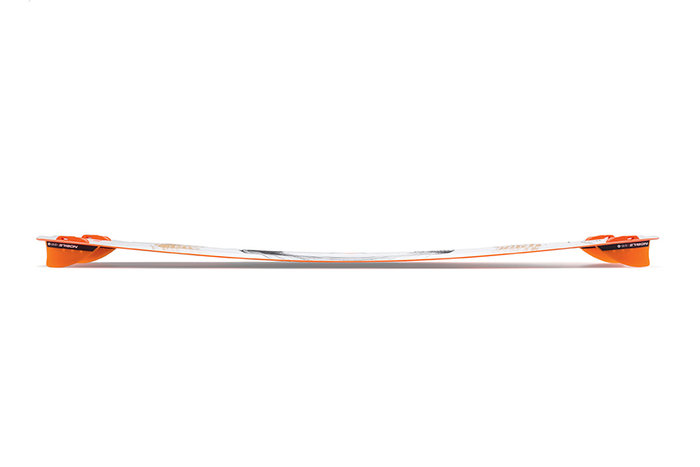 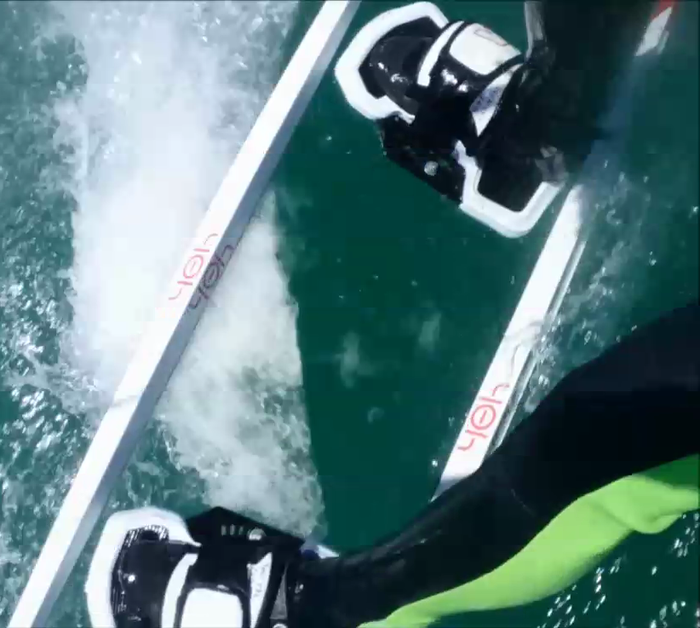 [quote=rynhardt post_id=1012019 time=1524050801 user_id=80189
<cut>
Have a look at the Nobile board below. Even though the rocker looks massive on the picture, as soon as you add the rider's weight and load against the kite, the rocker flattens out.
They call this a hydrodynamic rocker line. It works really well.
[/quote]
I'm thinking that when you go through a trough, the load decreases and the board curves more which lifts the front over the peak.
I'll have to investigate further!

Found this about the Nobile666 on another forum rynhardt:

"Only thing letting it down is carving, the rails are sharp and tiny so it tends to skip out pretty easily. So that means any sort of waveriding is out. And because its got near bugerall rocker at the tips it doesn't handle chop all that well."

And then from another poster right after:
"Nobile have some plastic inserts that go under the fins for the 666 and the 555 that give you increased rocker. Quik and easy to screw on and you can feel the differance. "

So for now, I'm happy with my progressive rocker, especially since a lot of the forward end is always out of the water and waiting for that chop anyway!
But I do agree that a higher rocker which flattens under load is well worth investigating!
Top
Post Reply
6 posts • Page 1 of 1