An object in a fluid

Okay, same scenario as before, except this time the side faces of the prism now also form an angle of attack to the fluid flow.

In the sketch below, the red arrows indicate the fluid pressure which is now higher on the sides, but still in balance, so no net lift to either side.
But there is still net lift upwards due to AoA on the bottom face.

The yellow arrows indicate conceptually the flow of the fluid as a response to the angle of attack of the prism faces. This is of course grossly simplified in order to illustrate a point (which I'll be getting to shortly

)
In reality the fluid flow depends on the pressure gradient, object properties and fluid properties and there will be a mix of laminar and turbulent flow, eddies, vortices and all other kinds of complications.

I have also neglected so far to indicate the fluid flow due to the pressure the front face is exerting due the non-zero relative velocity. I've indicated this in white arrows for completeness, but in the next step I'm going to reduce the front face area to zero anyhow, as I really only want to focus on the side and bottom faces. 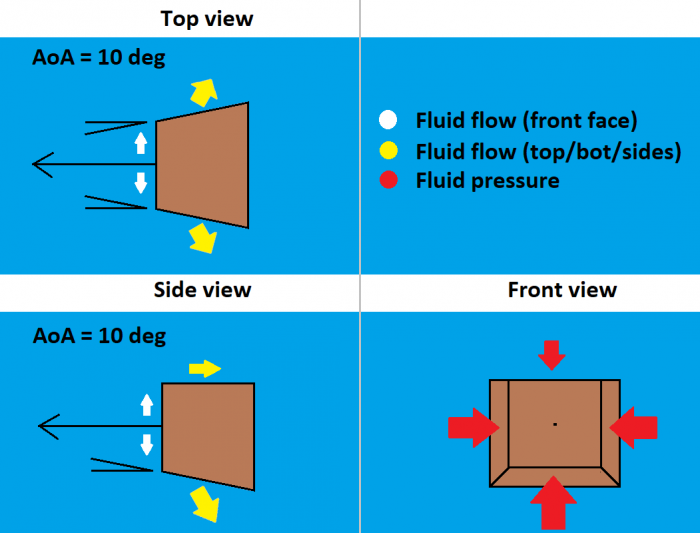 There is of course a wealth of literature on the subject of fluid dynamics.
We started off with a conceptual cube, and will be moving to a conceptual triangle. 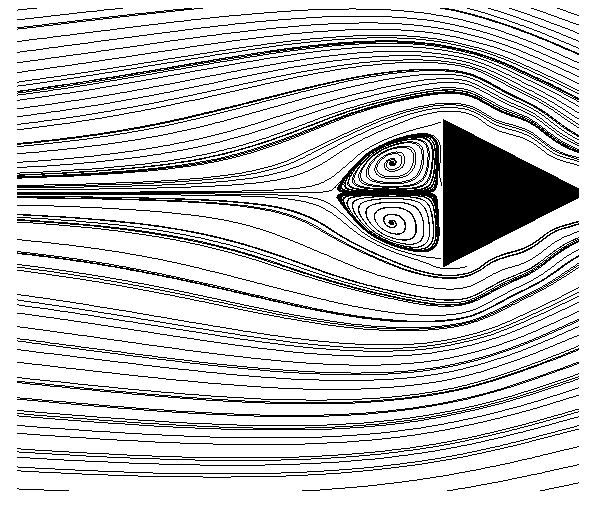 Let's get rid of the front face, which means we now have a prism with angled bottom and side faces. It starts to look a little bit like a boat now

I've inset a little 3D picture to aid the visualisation.

Let's also place this prism so that the top face is just above the water surface, and increase the density of the object so that at a constant relative velocity the lift from the bottom surface plus it's water displacement buoyancy equals it's weight, so that it doesn't sink or rise.
In reality the pulling force would need to be lower down at the center point of lift, otherwise there would be a net moment around the attachment point. But let's say I adjust the density of the object so that it's heavy enough at the back to counteract the moment of the lifting force and my little boat retains the same attitude towards the water at all times (i.e. pitch stable). For that matter let's assume roll and yaw also remains stable.

I'm going to ignore the back of the boat, because the point I'm getting to mostly concerns the ratio of planing vs non-planing force. 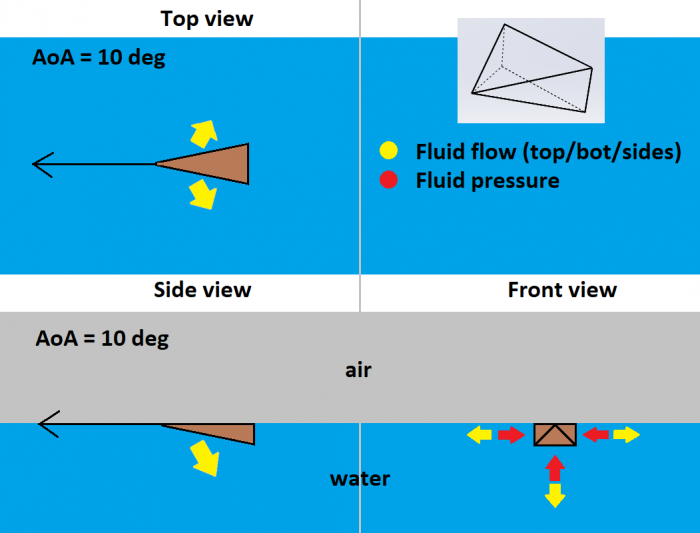 Professor Rynhardt,
You are bringing back memories from my college years 48 years ago. Please, no homework or tests...

JakeFarley wrote: ↑
Thu May 30, 2019 2:59 pm
Professor Rynhardt,
You are bringing back memories from my college years 48 years ago. Please, no homework or tests...

Hehe.. I'm actually using these diagrams to explain this to my son, which is 6 years old.

So... Now I have two prismatic hull shapes, with angled bottom and side faces.
They have the same volume, and the same density (in this case, say the density is 0.8 relative to water).
Their geometry is different. One hull (10% planing) is tall and narrow, and the other hull (90% planing) is short and wide.

At non-zero velocity, however, the geometry plays an important role. For now let's say the wetted surface area of both hulls are the same and we can ignore the viscous drag.
The motive force pushing the hull through the water has to overcome the reactive forces of the water it is displacing to keep the velocity constant.
These reactive forces are made up of planing lift forces and non-planing lift forces, depending on their orientation to gravity.

The faster the hull moves, the more reactive force (lift) the water is applying, but proportional to the square of the velocity.

For the 10% planing hull, the bottom face is proportionally tiny and does not contribute much to the planing lift force. This force is not zero, but it is small. It does still lift the hull out of the water the faster the hull moves. As it lifts the hull, there is less lifting surfaces (both sides and bottom) in contact with the water and less reactive force for the hull to overcome.

Given a sufficiently large enough motive force, the 10% planing hull will eventually start to plane, but it will take a large amount of motive force (low efficiency).

For the 90% planing hull, the bottom face is proportionally large and contributes significantly to the planing lift force. As the velocity increases, the amount of lifting surface in contact with the water decreases much more rapidly, and the total area driving the reactive forces diminishes much faster to compensate for the exponential increase in reactive pressure.

The 90% planing hull is able to reduce its reactive surface area much faster than the 10% planing hull, due to the bottom surface lifting the hull out of the water, and therefore requires much less motive force to overcome the reactive forces of the water (high efficiency).

In summary:
* All real, physical, rigid hulls displace water at zero relative velocity.
* All real, physical, rigid hulls will experience both planing forces and non-planing forces at non-zero relative velocity.
* The geometry of these hulls will to a large extent determine how efficiently they make use of motive power to overcome the water's reactive force.

Typically when someone talks of a planing hull, they mean a hull that is efficient in overcoming water resistance above a certain relative velocity.
And yes, there are other forces and complications at play that I've conveniently ignored for the sake of simplification. 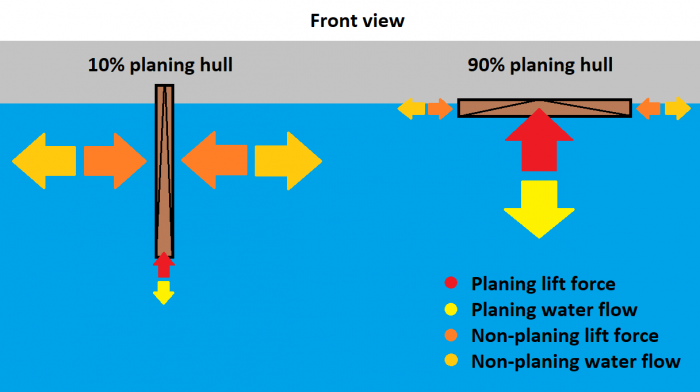 Ok, answering my own question:
https://openfoam.org/ (the engine)
https://sim-flow.com/ (the cockpit to drive it)