I get the feeling that there are plenty of people that would be able to build beautiful hydrofoil wings, but might just be held up by the doubt of wing profile selection.

You often see topics pop up discussing one or two random profiles, that got grabbed from somewhere. Well I would like to see more people making good (and beautiful) backyard wings. So if you let me know a few design parameters I can run a optimisation program that will select the best wing profile for your specific hydrofoil (NACA 4 and NACA 5 series only included at the moment, plans to expand in the future). I have had a lot of fun building and riding my own wings. It is a great feeling riding your handmade design that also rips.

Here is a example for a typical kite surf wing. Designed for:
Velocity range 20-40 Km/hr
Wing span: 650 mm
Area: 1200 cm²
Required lift (Rider weight): 85 Kg
Results show that the NACA1505 would be the best selection, with a weighted average drag of only 1.5Kg. However NACA1706 could also be a good choice, with slightly higher average drag, but a slightly lower stall speed of 14.1 Km/h instead of 16.4 Km/hr.

Notes:
The program assumes a elliptical wing profile will be used. Optimisation is based on the average chord, calculated from the Surface area and Wing span.
(Edit: from version 3, Apr 2021, Elliptical, Tapered or custom plan can be calculated accurately and average chord is no longer used. Wing is calculated for various chord lengths along its width)
This only looks at a ideal front wing, additional inefficiencies due to tip losses, tip washout and extra losses due to fuse, mast , stab is not considered here. Take it into account separately if needed.
NACA 4 and NACA 5 series only included at the moment, plans to expand in the future
(Edit: fron Version 2, Sep 2020, added basically all the airfoils one can find on Airfoils.com, so up to around 2500 airfoils. Lift induced drag was also added.)
The results are weighted a bit to give more importance to performance in the middle of the selected Velocity range and less importance near the ends.
(Edit: from version 2, Sep 2020, results show a balanced selection (weighted more to look at the middle of speed range. As well as a High speed and Low speed weighted selection for consideration.)
Xfoil is used for the basis of calculations.
Again, this is just to help DIY'ers.
Last edited by PrfctChaos on Mon Apr 12, 2021 1:53 am, edited 1 time in total.

Hi prfctchaos,
Have you tried simFlow? And analysis on STL or other shape files for wings?
I kind of cheated and developed my own non NACA wing design program a while ago, you've reminded me about simFlow so I'll have a play after I've joined the sides of my wing:)
Top

fluidity wrote: ↑
Mon Aug 17, 2020 6:30 am
Hi prfctchaos,
Have you tried simFlow? And analysis on STL or other shape files for wings?
I kind of cheated and developed my own non NACA wing design program a while ago, you've reminded me about simFlow so I'll have a play after I've joined the sides of my wing:)

Hi, I have played with (/worked with) CFD software. And it is a great detail tool, but it is a very long and slow/iterative process to try and select a airfoil / optimise just by using CFD. My style of optimisation tool is very much aimed at the frontend side of the problem, where you need to narrow the design process down to only a few airfoils (or very close shape), that someone can then finetune through CFD if they feel like it.

The other strength of my optimisation program and a weakness of CFD is that even after you have selected your airrfoil. There is still a lot of work to do to run that CFD over a range of speeds (thus angles of attack), to find what lift you are getting at what angle of attack. My program optimises over 1000's of Airfoils and Angles of attack and over the entire selected speed range. So it does a lot of work in a short time, trying to do that range of optimisation on a CFD program would not be practical. I see CFD only as a detail design tool.

The other design approach that also has merit is the inverse design method. But again it is only good for giving you a optimised wing design for a single speed. It is not possible to find the best profile over a speed range (or at least I do not know how). So it would give you a profile that is the best for a single design speed, but it might not have a wide range. (Racing is probably the best candidate for this design approach)

So trade-offs with all three the methods. The strengths of my brute force approach is that it will look at thousands of airfoils and narrow that shape down to just a handful that will work well over the specified range. If someone is interested, they can then use that airfoil as the starting point for more detailed CFD or Inverse design method. But honestly, I don't think most of us DIY'ers are making wings accurate to 0.2mm, so the optimum NACA 4/5 profile is likely to be a great wing and close enough. Not gonna win any races, but might be better than most off-the-shelf wings if designed to be the optimum for your weight and speed range.
Last edited by PrfctChaos on Mon Aug 17, 2020 11:18 am, edited 1 time in total.
Top

Wings should be ideally pressed in exacting moulds meeting the designed 3D shape.
My first hydrofoil has a 100mm wide band of 600gsm unidirectional glass lumping inside the other layers and faired after. Average thickness without the uni is approx 1.6mm and I trimmed the trailing edge a bit short and close to my 3D printed model, I should have cut it longer and tapered it better. However I still love the result! And things like wingtip flare and plan profile can also have significant performance input I'm sure.
Top

Maybe some pics will get more DIY'ers motivated to make wings... Here is a fast Wood and Carbon wing, made to fit a Neil Pryde fuse. 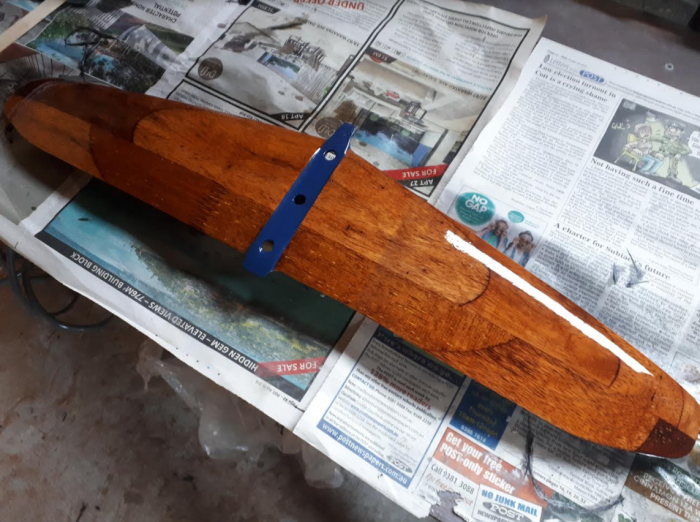 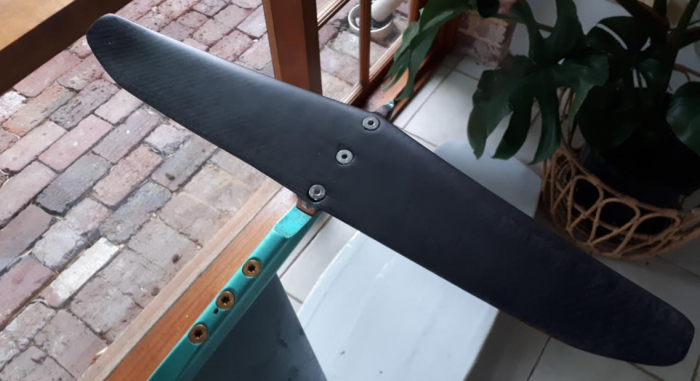 You could probably extend this method to 3D using tools like AVL or XFLR5, right? At least to optimize an initial design. Modelling in a CFD like simFlow mentioned before could then be used for the refinements.

Probably would make for a very nice project. This winter I'm going to build a foilboard, might build some wings next winter...
Top

Already pretty well setup in 3d as well. Takes me less than 10 minutes to finalise a 3d model (once the profile is selected, which takes 1 minute). But I don't think being able to 3d model is holding back most DIY'ers. I am just helping with the part I see as the biggest questionmark, and that is choosing a suitable airfoil.

Model plane makers have been making great wings without any fancy 3d for decades.

In my experience time spent on the quality of the surface finish is probably more important that any amount of CFD most people will do. Especially if not sure what they are looking to change/achieve through the use of cfd.
Last edited by PrfctChaos on Wed Aug 19, 2020 2:03 am, edited 1 time in total.
Top

I find this topic fascinating and want to build my own low-tech hydrofoils for wing foiling. Would think they don't have the same stresses as kite foiling and I could get away without using carbon fiber. Any advice on what design software programs to use would be appreciated.
Top

PrfctChaos wrote: ↑
Tue Aug 18, 2020 6:29 am
Maybe some pics will get more DIY'ers motivated to make wings... Here is a fast Wood and Carbon wing, made to fit a Neil Pryde fuse.

That is a beauty!

JakeFarley wrote: ↑
Tue Aug 18, 2020 5:20 pm
I find this topic fascinating and want to build my own low-tech hydrofoils for wing foiling. Would think they don't have the same stresses as kite foiling and I could get away without using carbon fiber. Any advice on what design software programs to use would be appreciated.

I think Fusion 360 is without a doubt the best free (Free for hobbyists) modelling software around. Airfoiltools.com is a excellent resource for finding info on the airfoil shape (Once it is known which airfoil to look for on there).

If it is going to be a wide low-tech wing and you do not have a large CNC router. Then I would encourage you to consider hotwire cutting the wing (in sections) from PVC foam (such as Divinycell 80Kg/m^3). Similar process to how RC plane wings get made (Although they will be cutting out of EPS), there are plenty of how to videos online for good ideas. Then you can glue a block of wood into the centre section (where the connection is). Sand it all down smoothly and laminate in the laminate of your choice. Then no 3D modeling is required.

If you have a large CNC router, then 3D modeling will be required.

Here is a photo of a large wing for flat-water pumping / very small wave surf. It is made to work well at about a slow jog speed. It was made flat (so that I could make it from a 25 mm thick foam sheet). Then cuts were made near the wingtips to curve the wingtips down. It is now one of my favourite wings. Have been thinking of remaking it in balsa wood and fibreglass, and maybe a bit smaller, optimised for around a fast jog speed. 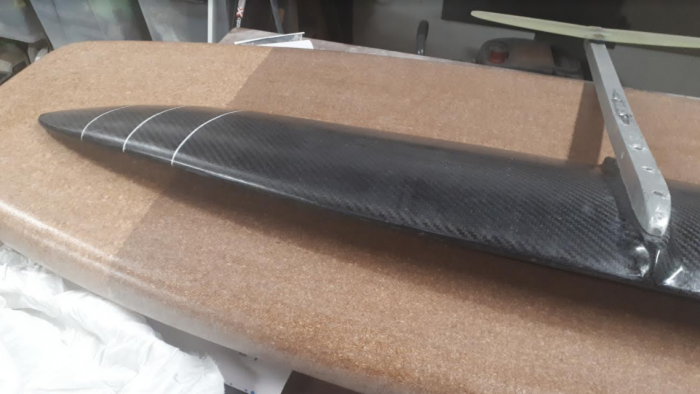