some pics from a re-purposed slingshot guardian for foiling.

kind of a dumb idea since the chicken loop is a heavy one to pick for a carbon bar build, but for foiling i mainly care about swing-weight of the bar. chicken loop is pretty short, giving a great throw with all modern features, and this bar just laying around unused.
* carbon tubes were 20$ on amazon, epoxied into center-piece and bar ends.
* cheapo talon-like replacement for chicken loop, just a pigtail and some PU tube
* added a bit more depower, but could have re-used old line. the throw is big, so depower id say is optional.
* originally had a manual 2-line safety (see pic) but went back to the single line with stopper ball and ring-thing. the ringthing front line seperator is just a part taken from the floats.
* probably will wrap with handlebar tape, its a bit slippery with gloves.
a fun re-use of old components. 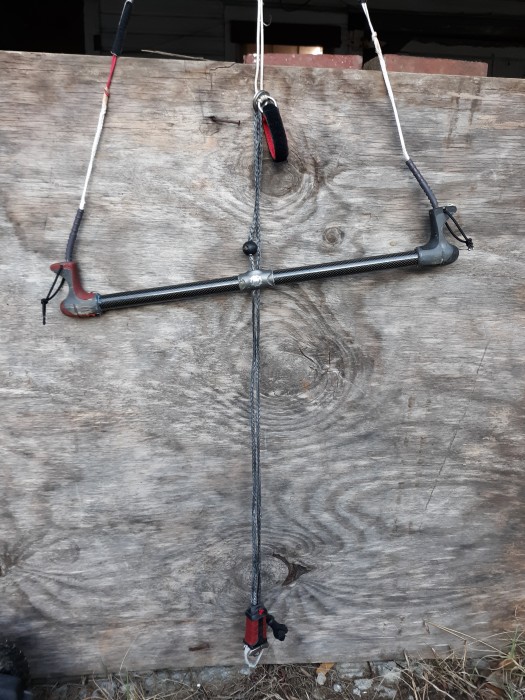 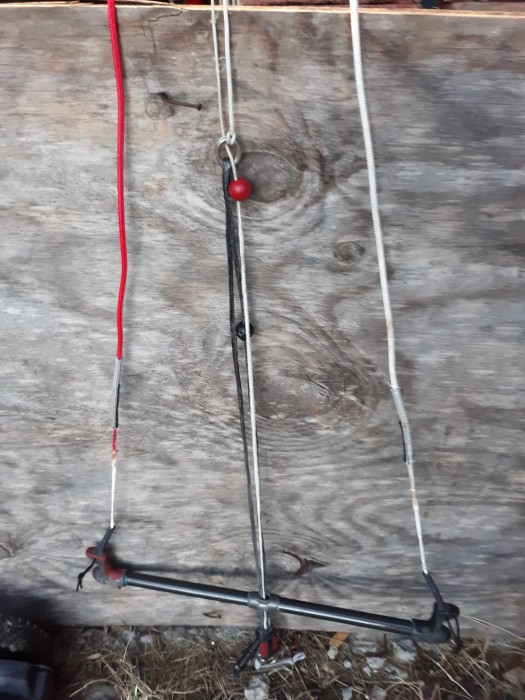 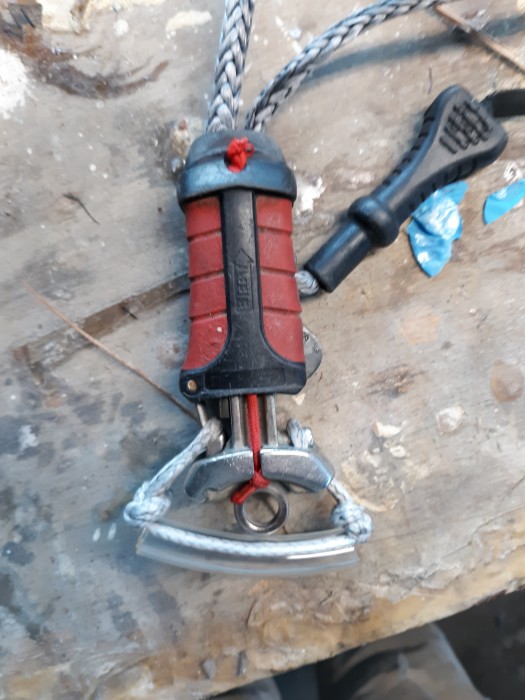 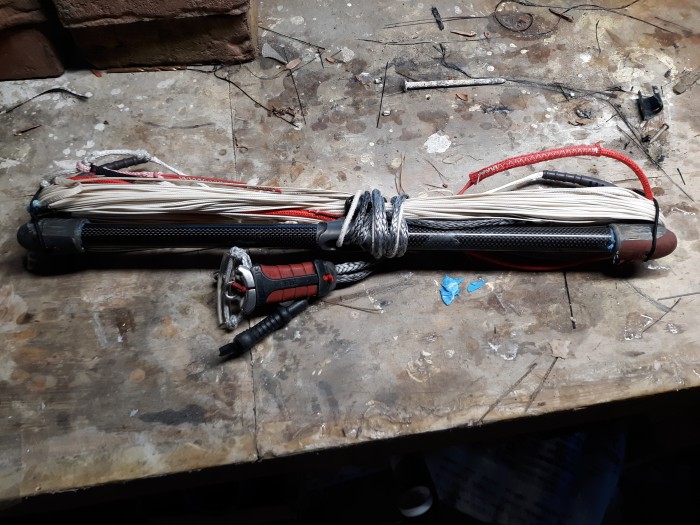 Nicely done. One point to consider is your loop. If you have to release, then clip back in using cold water gloves might be a big challenge.

this is a good point. i already had to do re-engage with gloves , it was hard, but luckily i could stand. if you were floating and kite was pulling it would be harder, no doubt. the SS bungee on the quick release could be made thicker, its a little too feather trigger.
Top

If you still have your Talon I modded mine with a length of tubing that limits the articulation of the swinging pin on the talon--helps a lot. That said, I went back to the smallest SS chicken loop instead of the Talon, honestly, as it's not much bigger and much easier to reload under load, and wears at least as well as the Talon. Houston Kiteboarding still has some left, or at least they did a month ago.

I only foil, and use a rope slider. In the winter I use 5mm three finger mitts so I need it to be easy to reload. Last winter I had to reset my un-modded Talon in deep water 39 deg water with 5mm mitts to clear a line. Took me 10 minutes... Exhausting and I am a very strong swimmer. I think your loop will be even harder under load. I immediately bought a bar with a seatbelt style click in chicken loop until I could decide how to mod my SS bars for more throw, and reasonable reload.

I make my own depower rope now by burying 1/8" Amsteel into itself with a locking Brummell Splice on each end. It wears MUCH better through the bar and cleat than the stock hollow core and you can customize the length. It's about 25 cents/ft online if you hunt around. I have settled on 26" of throw which works really well on my strut-less kites at my arm length. You lose about 25% of the length as you bury, so you need to factor that in. I always make mine too long, then throw a knot in on both sides of the depower T-handle. I use about 7' of 1/8, with about 2' of bury on each end. Throw a splice on each end and a knot or two and that puts me at about 26" of throw. I think you are probably correct that with long throw one may not need the center release line, but I like knowing its there and do use it occasionally so I keep it.
Top

thanks for your experience. i think i will get that short loop. i also know how gloves can really decrease safety .
i like the safetly line too, i kite by my self a lot and sometimes, with gusty wind and gloves on, you really want a single line safety. but i meant the depower is optional with such a long throw. it seems reasonable to just run one line and terminate on teh ringthing. but depower is nice if you are picky about your trim position. this depends a lot on wind-range you kite in; chesapeake: lot of wind range. obx: steady .
Top

Ah, sorry I misread re your depower. I like to have it to tune the kite to it's sweet spot for a given throw, or if I am too lazy to re-rig. Kinda just like to mess with it.
Top

If you are worried about rehooking with the small loop onto a rope slider
Get a carabiner and hook it to your harness someplace you can reach easily.
Then you can rehook the loop anywhere it’s easy and use the carabiner to hook the loop to the rope slider.
Yes, it will move the depower a bit further away but it will get you home easily, quickly & safely.

If you are needing to do this regularly, wtf are you doing?
Top

Not the issue here. The issue is closing--reassembling--the chicken loop to the articulating pin on the SS box, irrespective of what the loop is ulitmately attached to, or around. Under load it's very difficult with gloves on. The pin is small and it articulates, If the C- loop itself is not rigid it's basically two wiggling ends that need to line up, and both are small. Now do that under some load in cold water with 5mm gloves. If you don't have a SS system what I am saying might not make a lot of sense.

I had to fight that battle one time, in maybe 100 winter sessions. Once is more than enough.

If the attaching side of the chicken loop is rigid, it's very doable. The talon is a rigid loop, but it too has an articulating open D metal loop that has to fit over the articulating, and small pin on the SS box.
Top
Post Reply
8 posts • Page 1 of 1