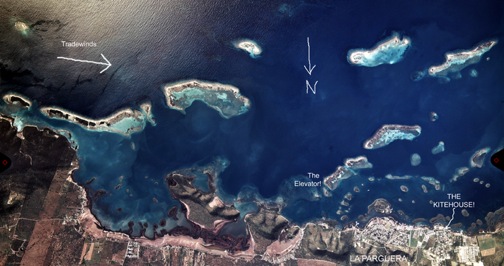 TRIP REPORT: Just returned from La Parguera and this is what I learned ... 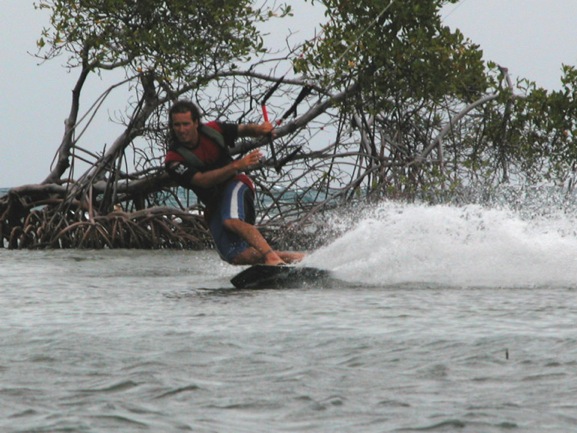 Paul Menta shreds, riding is what it is ALL about.

The Kite House at La Parguera, Puerto Rico is the creation of Paul Menta of Kitesurf the Earth, PASA Master Instructor, a director of the FKA and a lot more. He creates a laid back atmosphere for small groups of folks with a need for speed without the frills. We are talking riding immersion here. The concept is targeted at riders that have already had an intro lesson on land and are ready to advance on the water to guys that are working on staying upwind to jumping or even top end shredders working up to that double handle pass. More about this concept can be found on Paul's website at: http://www.kste.net/margarita.htm

The Elevator is only one of the many riding areas available along the wide open coast of SW Puerto Rico. The trade and thermal winds pump in from behind the mangrove cay and through the legend "The Elevator." A very nice slip stream is setup over the mangrove cay. If you jump into the slip stream, BUMP AND UP YOU GO! It's a blast! This site is a short yolla (skiff), ride from shore. The Kite House has two of these sturdy island skiffs for rapid transport to riding areas. Riders can do downwinders escorted by an instructor in the inflatable boat to rapidly advance in kiteboarding and upwind technique. More advanced riders can toss off moves near the Elevator and can circumnavigate the chain of mangrove cays and reefs. The trades are pumping, why not take a run with your kite buds to one of the outer islands off La Parguera, if you can handle it, have at it! 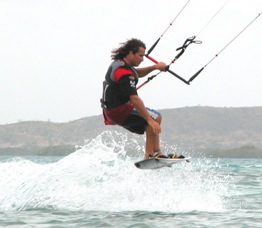 Rigging in the shallows, gonna be a GREAT DAY of fast time on the water!

Setup is easy, with Kite House staff helping your put things together. Everything is setup in the shallows in the lee of the mangrove cays, with typical water depths typically around a foot or less. 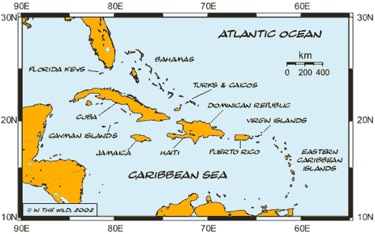 Puerto Rico in the Caribbean Sea

So where is Puerto Rico (PR)? In the Caribbean Sea, within easy travel from Florida, major airports in the USA, Europe and other parts of the world. Folks can fly into Mayaguez Airport about an hour to the north or they can fly into San Juan Airport about two hours away. Airport van or "publico" transport is about $30. and $35. USD from each airport respectively. Special arrangements need to be made on Sundays and holidays. 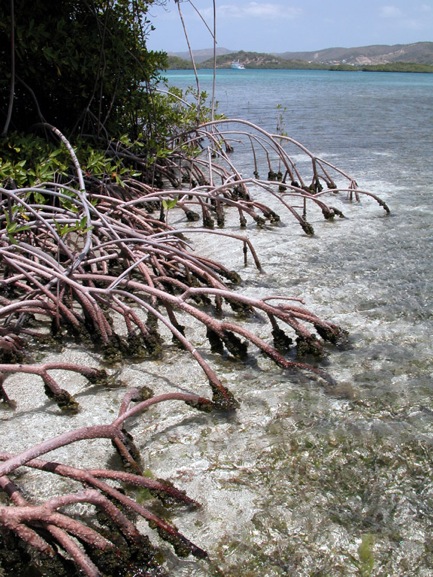 Hang out off the mangroves ...
It is worth the trip, wind, water, sun

These are the digs. Nothing fancy but a place to hang out, sleep, eat, play video games, checkout kiteboarding videos, party and jump off from to RIDE. 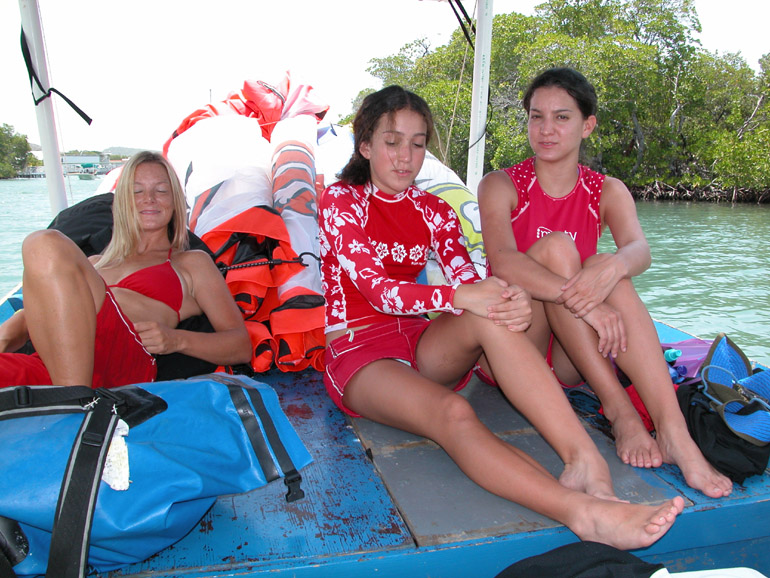 Everyone is loaded up and moving out ...
Riders are moving out to the Elevator. Rhondi of the Kite House team on the left with a couple of local shredders in training. 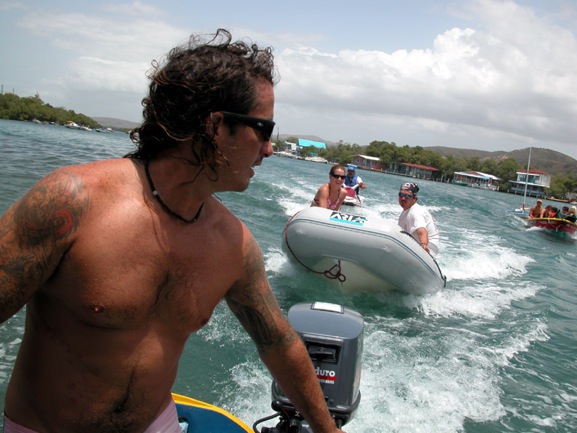 The inflatable chase boat follows along. Brian, running the inflatable, provides a lot of local knowledge having been on and around the island for a long time. He has great knowledge of the weather, reefs, fish and island lore in general.

Tied up and ready to go!
Here we are, let's setup and have at it! 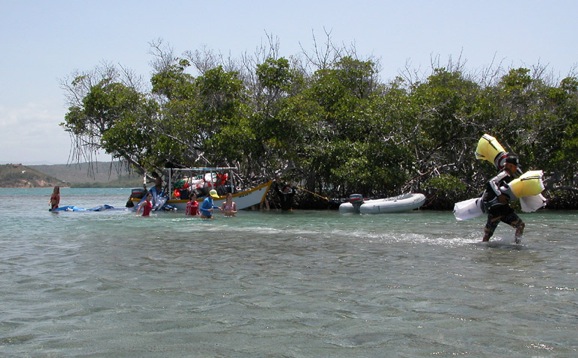 The Kite House Staff helps the riders setup. That is Charlie carrying the kites otherwise known as Pochito, the FLYING CHICKEN!!! The local kids hung that title on him based on his yellow hair and high flying tendencies.

Expert instructors help with the setup of riders. 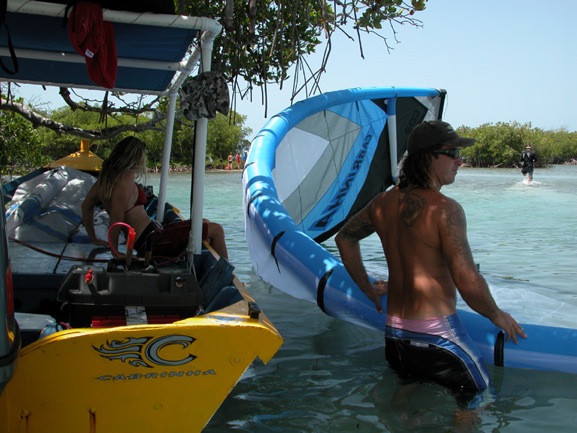 Pump those puppies up!
No hand pumps here, just an air tank for easy kite inflation. 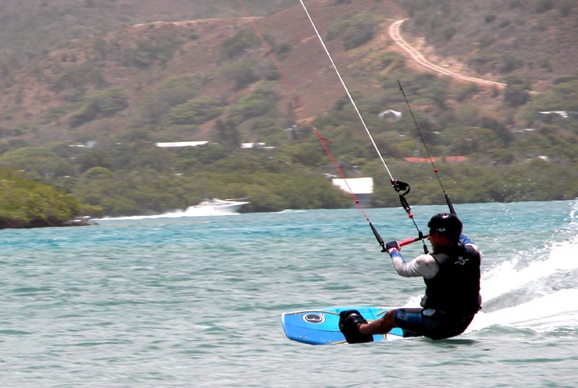 Wind's on and the shredding is fine ... 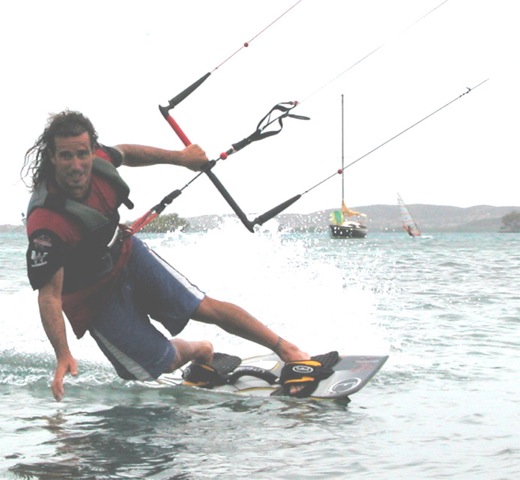 Paul Menta out of some playtime, showing off his moves ... 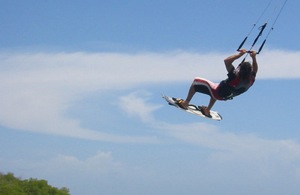 So, here are some impressions about the Kite House in La Parguera, Puerto Rico. It is a newly discovered, wide open area with virtually NO crowds. It is also easy to reach and is in the USA. It has great winds, more about that later. It has not only the normal tradewinds but in addition often has some nice thermal winds that come with all those arid shoreside conditions. It does rain in La Parguera, but only about 1/3 as much as the north coast of the island, so not much at all. 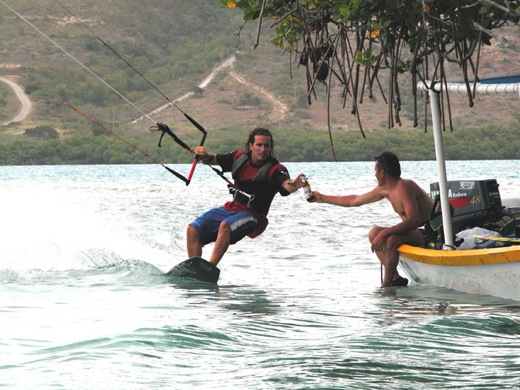 Paul grabs a Buckler from Francesco, he didn't like it!

Throwing a jump into the slip stream by the cay. NOTICE anything odd about the water, it's very calm for such a nice jump.
Click for a larger image:
http://gallery.kiteforum.com/albums/alb ... umps_s.jpg

A few more details about the riding at La Parguera. There is no nearby shoreside beaches from which to launch. The Kite House operation generally launches from shallows adjoining mangrove cays offshore accessed by boat. They may do day trips to other areas, some of which have beach launches when winds are suitable. Riders will want to bring booties as in the case of any trip to a new area. Some kiters take them off at time of launch while others wear them the whole time. I normally can't stand booties but the LWD board footstraps made me forget I was wearing booties so I just left them on. The Kite House brings lots of drinks and lunch out on the boat. Be sure to drink lots of fluids and put on block while you are hanging out and riding offshore. You may choose to bring kites and boards but this shouldn't be necessary. The Kite House currently has a wide selection of new Cabrinha kites and LWD boards for guests to use at no additional charge.

Winds off of La Parguera result from tradewinds which blow through a wide portion of the caribbean, often summed with sideshore thermal winds. I spoke with Ada Monzon, a promient meteorologist on the island. She concluded that the unsual micrometeorology of the SW portion of the island may allow for stronger, more consistant winds than may occur in other parts of the island. Brian indicated that the thermal winds can boost the tradewinds by 4 to 6 kts. Arid conditions along the southern portion of Puerto Rico particularly to the east in the area of Ponce seem to contribute to the locally strong thermal winds. I am still trying to find cataloged wind records for this area of the island and will post them once I locate them.

Shoreside, there aren't a great quantity of superlative restaurants. Fortunately, Paul, a former gourmet chef with three restaurants, prepares two great dinners each week. I had one of those it was great! So good in fact, that right after we finished they turned off the lights throughout the town. The starfield visible without the lights was impressive to say the least. Each week there is a least one night out at a nice local restaurant, La Jamaica, up in the hills. 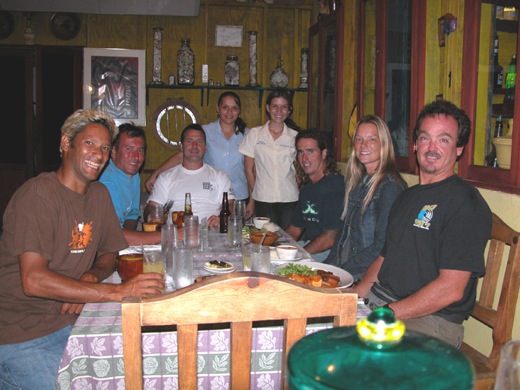 The Kite House Crew Chows Down at La Jamaica

For folks that want more upscale accomodations than the laid back atmosphere of the kite house, there is always the hotel portion of La Jamaica. The town may not bowl you over for partying. So you might want to spend a night or so in San Juan to take advantage of the party scene there before driving across the island. There were a number of places with live music in La Parguera when I was there so there are still things to do at night outside the Kite House if you are up for it after riding all day.

There are some other things to do in La Parguera and throughout Puerto Rico aside from kiteboarding. I understand that there are abundant, excellent reefs as well as a wall for divers off of La Parguera with lots other varied conditions about the island. More about this at:

The bay off of La Parguera lights up, literally, at night. It is a well known biolumenescent bay and excursion boats run at night to take folks out to check it out.

From rainforests, rocky coastlines, caves and a lot more, there are interesting sights to checkout in Puerto Rico.

I just restored this dozen year old post which had been corrupted resulting in dead image links. A look back, enjoy!
Top

I have been there...fantastic spot!

But, your map in top is wrong...turn it 180 degrees and it will be correct...and the North arrow should be South
Top
Post Reply
3 posts • Page 1 of 1