Winds of Mauritania, Kiting Among Shipwrecks, Terrorists and

Winds of Mauritania, Kiting Among Shipwrecks, Terrorists and

Janneke has a dream, she would like to travel to the Bay of Nouadhibou in northern Mauritania with a skilled photographer and experienced kiter to ride among the stark armada of abandoned ships littering the shores of this place. The setting for riding images would be both unique and dramatic. There is also WIND here, caps warranted. I understand they have strong, consistent westerly winds. The landscape, absence of topsoil, vegetation and rife erosion support this conclusion as well. Western Sahara, more specifically Dahkla the next country to the north is a newly discovered kiting destination. "Kite camps" have popped up and now are well booked in advance in that country. Apparently Internet kiting forums are abuzz in Holland, Germany and France with the wind prospects offered by this section of the African coast.

Mauritania has yet to be opened and for good cause. It is still a conflict zone, heavily impoverished and besieged with other problems. I changed Janneke's name for purposes of this article. She is actively looking for a good action photographer and well experienced kiter to come along. If you're interested drop me a line and I'll pass your interest along. Could be a singular trip! Being a woman and Mauritania being a strict islamic state she plans to wear a burka to try to avoid problems. Lots of abandoned ships are decomposing at points along the bay.
Photo by crondenas

Are there really a lot of ships? Yes, hundreds. How did they get there? This is one version "There is no mystery in how those ships got there,
for years Mauritanian harbor officers were taking bribes and allowing ships to be discarded in the harbor. Discarding a ship is very expensive so during
the years many companies from all over the world got rid of their unwanted ships cheaply in the Bay of Nouadhibou."
http://crazytopics.blogspot.com/2007/02 ... eyard.html She was taken by some images I posted kiting around the wreck of the Sapona. The imagery that might come out of Mauritania would likely be far more amazing. Still, the Sapona is easily accessible about 60 miles from Miami in the friendly Bahamas. The Bay of Nouadhibou is a different proposition, turbid, streaked with oil slicks, industrial runoff, Al Qa.eda cabals, etc.. Kiting by the Sapona off Bimini, Bahamas


A few other kiters have been here I understand. One even shot an intriguing video, see below. He traveled in over night on a pile of rock in a railway ore car on the QT. Dangerous living.


[youtube]IoG60VG-kRY[/youtube]
Thanks to Janneke for telling me about the video. Miguel got there early, in 2007 it looks like. Miguel did some of his riding at the junction of the ocean with the bay around the abandoned wreck of the "Guadaloupe?" Can't quite make out the spelling on the ship's stern.

Aside from some mining and oil interests fishing and agriculture seem to be some of the main livelihoods. I looked under piracy but didn't find many recent entries. Now with the Berbers back in the day, different story. Checkout Sean Connery's, "The Wind and The Lion." A satellite view of a harbor area A surface view of the same area

Logistically, such a trip poses some serious hurdles and risks. This is aside from Visa requirements that may exist. There have been numerous terrorists attacks against foreign nationals, including several murders over the years. http://www.fco.gov.uk/en/travel-and-liv ... #terrorism

There is abundant child slavery for domestic servitude, forced begging and sexual purposes of both genders. In fact up to 20% or 600,000 people have been estimated to be slaves in the country currently. https://www.cia.gov/library/publication ... os/mr.html http://en.wikipedia.org/wiki/Slavery_in_Mauritania

You are looking at an inexpensive air fare of about 1800 euros and then overland travel from Nouakchott about 500 km to the Bay of Nouadhibou. I guess you could travel through from Dakhla in Western Sahara and travel overland south too although that would call for travel through hazardous areas of Mauritania. Considering things temporary wearing of a burka may not be enough. Using Islamic swimming garb along the lines below may be indicated: 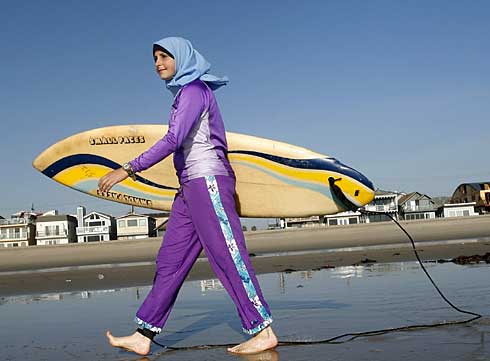 A surreal landscape of sedimentary rock created under the ocean eons ago and now scarred by desert and ocean winds.


It is interesting to take a look at the area in google earth. You can see numerous oil slicks drifting from tanker bunkering areas and grounded wrecks. Most of the images on here came from the panoramio photos embedded in the sat. images.

An abandoned ship at the knife point of land separating the Atlantic from the Bay. Wonder about riding both sides here? There are some massive wave cut cliffs along other parts of the western shore. Could be some major current here at times though.
Photo by bigcarlitos


So where is this place? Local fishermen waiting by the sea.

A look over hulks stranded to the south of Port Etienne with Cansado visible in the distance.
Photo by Julio Dominguez Checkout the the land relief behind the ship. This is looking more or less NNE I would guess or cross wind to what may be prevailing westerly winds. This means in high relief areas north up the Bay, you will have a lot of unstable wind due to rotor. This could make kiting on the inside in OFFSHORE winds problematical in some areas. A chase boat would be a good idea as well.
Photo by Maxim MD

Not too far north out of the country, things "seem" to be more urbane. The PKRA even had a competition in Dahkla. Now is it in Western Sahara or Morocco? It seems Morocco backed by the French government has control of the coastal area of the country. So, that part might be considered Morocco or at least until things change again. Here's the video showing ocean and wind conditions there:


Good luck Janneke and all success in your adventure. Looking forward to checking out the images if you are able to make this challenging and dangerous undertaking a reality.