I understand this accident happened to a well experienced kiter visiting Key West for a week or so in mid January. He lives in Florida but may not have been all that familiar with things at Smathers particularly the outlying submerged rocks along the jetty. It is amazing that he came away with no TBI or spinal injury and only 60 stitches to deal with rock cuts. Blake and other friends helped to secure both the rider, his kite and get him to the hospital for treatment. That is how accidents work out, you never know how you will hit. A kiter in Europe died after hitting a rock like this with the subsequent head impact on another. This kiter was very lucky. 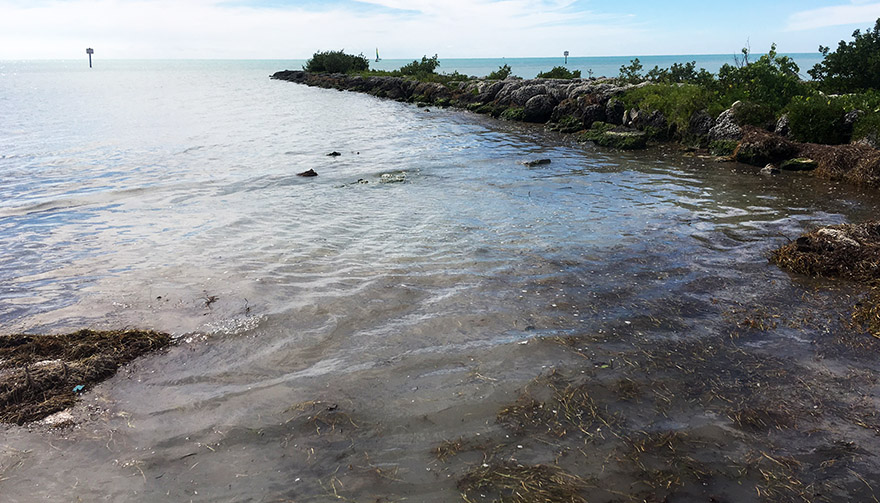 A surface view looking south over the east side of the jetty where the accident presumably happened. 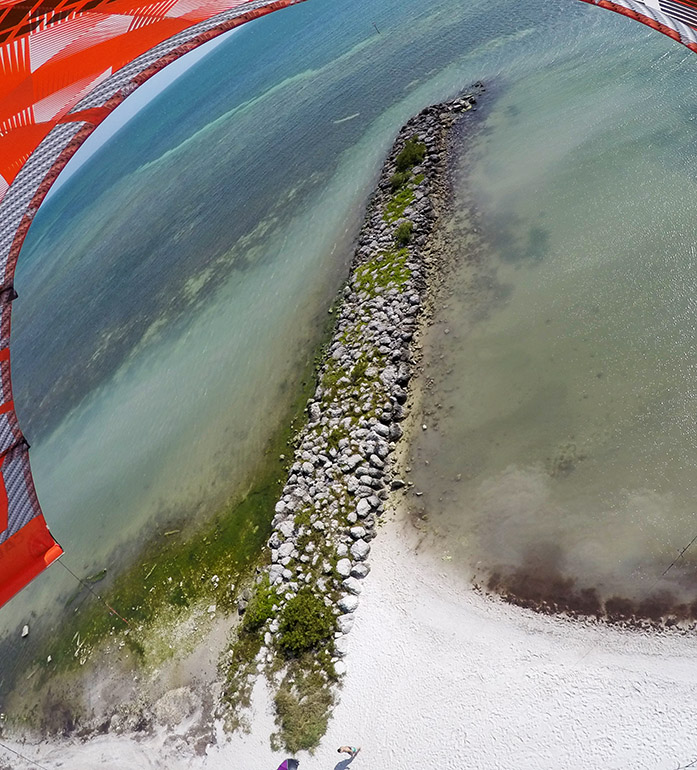 A look at all the stray rocks in the shallows in the area of the jetty. I understand it was around high tide and the water was turbid when the accident happened. These conditions made spotting the rock in advance quite difficult.

This video shows off the location on the outer eastern side of the jetty at Smathers beach and general weather conditions at the time.

The accident may have happened within the hour before the wind clocked north with the movement of the front, taking wind dead offshore at Smathers. The wind was exceptionally gusty, approaching a range of 30 mph per this wind record from the USCG station. I understand westerly winds can be like that at Smathers, not real friendly in short. Excessive gust ranges like this make kiting extremely punchy and challenging.

Lots of us kite in shallow water, sometimes we may know we have hard submerged objects, other times not. Very little time was available to do anything after the high speed impact happened. The rider was knocked forward, did a head plant on the bottom, may have struck another rock, his board tensioned a kite leader aiding the start of a powered kite loop and the rider dropped the bar. Despite dropping the bar, the kite and rider still had plenty of forward momentum to drag him through the rocks. Given all that, the uncertainty of effectively being able to do anything after striking, the best course would be to try to avoid the impact in the first place.

So, work to avoid hitting hard submerged objects as obvious as that seems. It is an easy mistake to make for any of us. It might be a surprise to some to learn something as simple as that has killed people. Assume there may be stray rocks around piles of rocks as with jetties and groins and keep a reasonable distance away. If you are walking out and hit rocks, there you are. Try to stay in deep water, twin tip boards usually won't strike if you have at least 6 inches or so of water on level plane. Wave action can expose more deeply placed rocks to make them a threat however. When in doubt, turn for deeper water, walk if you can or at least go slow. You can down loop even with a fairly slow impact so the last may or may not help.

Wearing reasonable safety gear may help as well. He just as easily could have had his skull raked over a rock (or his face) causing a severe abrasion along with the risk of traumatic brain injury (TBI). A helmet might make the difference between growing back a bunch of hair and skin or worse serious brain injury, or not. Some impacts are just too hard for conventional helmets to help out that much. Still, you never know in advance what type of impact you will have and whether a helmet might just save your life and/or aid in more rapid recovery. It is best to wear a good one for the demands of kiting and forget you have it on.

Looking closely at the second video, despite what I was told, I think he was riding ENE and struck one of the outer rocks of the jetty at the south end. The tide was high and a bunch of rocks were just sticking up there as show up later in the video when they pan south. He did his forward flip and looped his kite dragging himself NNW over the rocks. If you look at the video, you'll see his lines running to the kite on the west side of the jetty by the bush, wind whipping from a westerly direction and lines running from the SSE.