The Kiteboarder Magazine published an article about Silke Gorldt's accident and the sweeping changes her loss brought to kiting. The text of the article appears below along with the cover and page photos.

Progress can come at a harsh price. A tragic loss often drives change, instead of simple reason alone.

Silke Gorldt was a beautiful person both inside and out. Intelligent, strong and impressive at six-foot in stature, she started kiting in 1999 in Tarifa at 23 before moving to the North Sea in 2000 for academics and better kiting. Super positive and always smiling with a remarkable stoke for life, Silke traveled the world for competition and trained in Maui in 2001. She was third in the world in the PKRA, Champion of Germany and a globally respected and much-liked professional athlete.

Silke was competing in the Fischland-Tour on July 2, 2002 in Zingst, Germany, on the Baltic Sea, when tragedy struck. The near onshore winds were strong at 17 to 27 knots and she was flying an 8 to 9 m four line inflatable C-kite. She was changing direction within 25m (85 feet) of shore during her heat, when her kite became tangled with another rider’s kite. The other rider unhooked in an attempt to have better kite control while talking to Silke. Silke did not unhook and neither had a quick release (QR), as was often the case in the early days of the sport. The two joined kites suddenly powered up in a gust and/or by falling into the power zone. The overwhelming kite force ripped the control bar out of the other rider’s hands. The released kite’s control bar slid up along Silke's lines and caught below her kite causing the two kites to loop rapidly with tremendous force in the center of the power zone. Silke was pulled horizontally across two wooden erosion groin structures at high speed and into a fence on the beach. She was observed to be trying to unhook in the first few seconds of being dragged but she wasn’t strong enough. It is unlikely anyone would be with such force. She was dragged approximately 150m (500 feet). First aid was rendered immediately and she was transported to the hospital by emergency helicopter. She died on the way to the hospital. The accident devastated competitors, organizers and concerned people worldwide.

Times and attitudes were different in 2001. Although many started out with kite leashes, in time they were seen as a serious impediment for tricks and competition. As a result, most competitors and kiters in general didn’t use them but merely set their kites free to blast off downwind. Paul Menta of The Kitehouse taught his students downwind of what would become Maui’s Kite Beach how to track and potentially avoid runaway kites —it was that big of a problem, which led in part to a total ban of kiteboarding on Maui’s North Shore for nearly two years. Reliable quick releases weren’t in common use and what few were around were distrusted by riders, with justification. Many said “you can always unhook.” Silke proved the fallacy of this worldwide. A powered kite exerting hundreds of pounds on the loop can easily be beyond anyone’s strength to be moved.

The horrific accident of Silke Gordlt was a powerful catalyst for change. Her loss motivated the industry to focus on quick release technology, develop spinable kite leashes and encouraged the various riding communities around the world to put them into use. The use of leashes was no longer viewed as unnecessary but took time to gain traction. Wakestyle kiting and frequently lost kites in busted tricks continued to compel riders to use kite leashes. These changes have impacted safety and the sustainability of kiting worldwide. Kiting technology, practice and safety can always improve but we have come a long way.

Our sport owes a lot to Silke for improved safety, increased instruction standards, reduced access threats and more. Following her accident, her brother and friends formed the Silke Gorldt Surfing e.V (SGS), a non-profit association promoting the safe and responsible introduction of youth to the sport of kitesurfing and competition in Silke’s memory. More at http://www.silkegorldtsurfing.de" 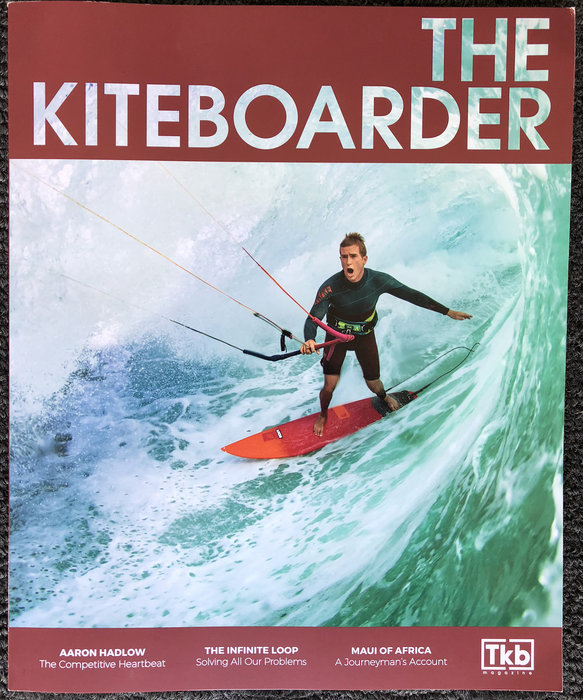 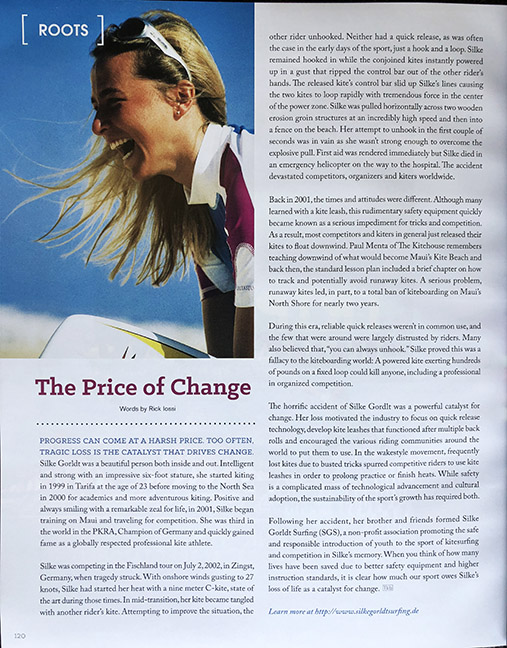