Four races in light winds kick-off the qualification races at the event in Cagliari.

The light Scirocco breeze picked -up in the afternoon at Poetto beach , allowing three races in each of the four fleets the competitors were divided (three male fleets and one female).

All the favorites were right on top, like World Champion Johnny Heineken on red fleet and his sister Erika Heineken on the ladies. Great start also for the new European champion Slalom, Andrea Riccardo Leccese (Columbian guy riding under the Italian team) who won all the races on his fleet.

He is leading now the Overall ranking together with Heineken.

The first day of competition had appeared uncertain, in the eyes of the 195 competitors (including 42 women). Until noon, the weather kept everyone calm down, to finalize the preparation of their boards and kite and deal with the sailing instructions during the skippers meeting. A little later, the rise of a breeze from the south has was prompted by the committee to start competition. All competitors left the beach in a few minutes coloring the sky with hundreds kites and reaching the racing area, not far from the shoreline.

The show lasted until late afternoon.

Tomorrow the qualification rounds will continue in order to give the names of the 50 finalists in the man Gold Race and 20 in the women that will battle on Saturday to reach the medal race.

Riccardo Leccese. "After the three first places today I' m convinced I can win the title. I can't wait til Saturday, so I can compete against Heineken in the gold race: he is my only concern."

Surprised to be among the first, Andrea Beverino,at his debut on the kite after a long career on windsurfing. "I am very pleased to be in sixth place, the first of the Italians, really I did not expect it," his comment in front of the overall standings. 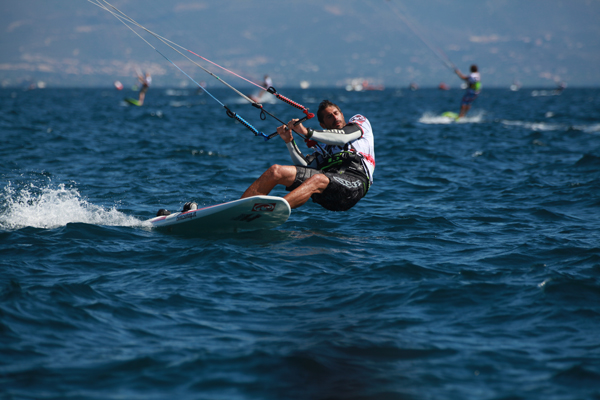 Brand Affiliation: None
Has thanked: 2 times
Been thanked: 7 times

It would be nice if they added what fleet each kiter is in so you can see who beat who.

Anybody know how many riders will qualify to the Gold fleet? I read somewhere that it would be 10, but that seems low.
Top

It says 50 men and 20 women go through to the Gold Fleets.


Nice that the wind turned up. Doesn't look too flukey on this. Maybe it was tangles causing problems?

After three races in each mens qualifying fleets, John Heineken is leading the pack tied with Riccardo Leccese and Julien Kerneur in third.

After the opening skippersmeeting, racing got underway at 13:15 in a shifty 7-10 knots breee, giving the two race committees on the orange and white course areas a hard time to set proper courses for the almost 200 competitors from all continents.

In all three mens fleets it was quite a mixed bag of results, seing 2010 world champion Adam Koch ending up in 7th position after 1 15-3-3 score, while Leccese and Heineken managed to get three bullets each out of the difficult conditions.

The only group, where the all the top riders were able to score, was the yellow group, Gruber placed in 5th, and Kerneur and Nocher in 4th and 5th overall from the green fleet.

World ranking leader Bryan Lake got a bad start into the regatta finishing 1-32-dnc, but that should change with increasing winds tomorrow.

Biggest surprise of the day was Andrea Beverino in his first international competition, ranking 6th overall with a 5-2-2 score.

Racing continues tomorrow with the re-seeded mens fleets in the qualifying series , and the womens single opening series.
Top

What discards will there be and are results are carried through to the Gold fleet and the medal race?

The forecast didn't look too reliable before, but at least now it is predicting wind for the rest of the event.

The new mens fleets which were created after day 1.
http://www.kitecagliari.com/bacheca.php
Last edited by ronnie on Fri Oct 05, 2012 2:14 pm, edited 1 time in total.
Top

Its good that the wind has turned up.

There is a meeting in Ireland in November when the windsurfing groups will present the argument to reinstate windsurfing in the Olympics and it will be a strong case that they put forward. They were caught sleeping at the last meeting.

A world championships with 5 knots of wind and no races would not have looked good. Now this event is looking like it will be a big success and the numbers racing will give the Olympic committee something to back up their original decision.
Top

ronnie wrote:A world championships with 5 knots of wind and no races would not have looked good.

Which is, unfortunately, what happened at the European Championships last week in France, despite the PR machine working hard to state that it was an enormous success. Hopefully the images from the Worlds will make everyone forget about last week