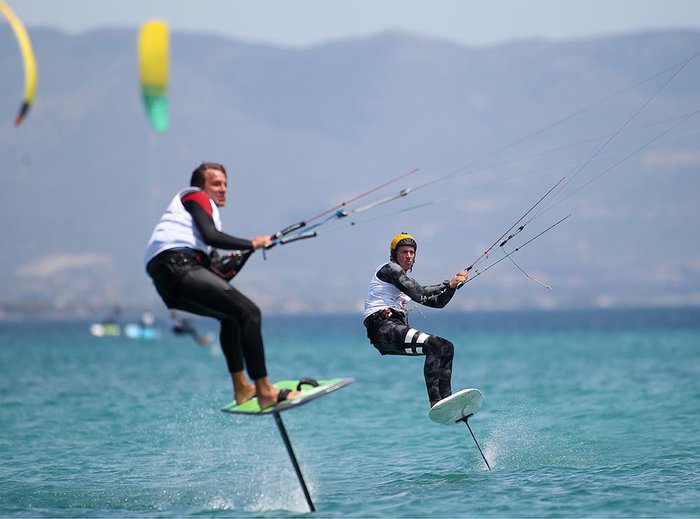 The Monegasque Maxime Nocher and Italian-Colombian Riccardo Andrea Leccese are sharing the lead after the first 10 races, run in the Mistral wind the first day and with sea breeze the second.

Cagliari, 17th May, 2016 – Tthe Kiteboarding European Championship – Formula Kite & KiteFoil has started today with the favor of Mistral wind. It will go on till the 22nd May, organised by the Yacht Club Cagliari with the support of the Italian Army. The typical NW Mistral wind has blown around 16 knots with gust over 24, an ideal condition for the 40 competing athletes: thanks to the performances given by their kites and foils, they have reached high speed and offered a great show in front of the Poetto Beach. The leeward mark has been set very close to the seashore, what has made the riders’ turnings really spectacular. They are the best in the world in the Kite Class, which is most likely going to became an olympic sport starting from 2020 Tokyo Games.

The wind has been dropping little bit during the last round, but it has allowed the 5 windward/ leeward races scheduled for the first of the two qualification days to be completed. The whole group has been split into two different fleet (Yellow and Blue), combined to make up the overall results for the coming gold and silver fleet. In the first fleet the Monegasque Maxime Nocher, defending European Champion, has challenged British Oliver Bridge (current Junior World Champion) and Spanish Paul Florian Trittel, while in the second group Italian-Colombian Andrea Leccese (number 4 in the world ranking list, member of the Chia Wind Club) has led the round with a great advantage. The two riders are in ahead of the respective fleets, with 4 scores each (after getting the first discard).

TODAY’S STATEMENTS.
Riccardo Andrea Leccese. “In the first two races, I started with precision and faster than the others, in the fourth I put my heart in recovering a bad start, while in the fifth race I’got the timing wrong, starting over a minutes late and I’finished first, it was the best and most difficult race of the season”

Maxime Nocher. “It-s been a perfect day, both for the weather conditions and the results I got: I knew I’d found such tough opponents as Bridge and Trittel, I think this challenge will last for all championship. I’m racing with the foil, which is really gratifying and exciting with such a calm sea”.
Top