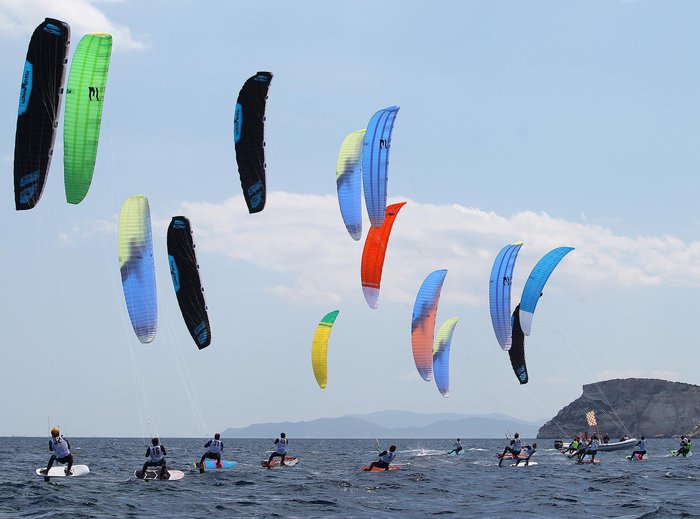 After the first two days qualifying races - 10 each in the yellow and blue fleets - the fleets were divided in gold and silver groups for the remaining days of the event before Sunday's medal races.

Cagliari, 19th May, 2016 – On the third day of the event ,the Mistral wind was blowing from early morning. After the skipper's meeting at 11 ameverything was set for the first start of the Gold Fleet at 12 pm.

The mistral wind is usually very gusty with an intensity ranging from 9 to 20 knots, the direction of the wind is usually North West but with big shifts which made for extremely tactical racing. The adopted race tactic will make the difference and the best athletes will have to choose the best moment as well as the best side of the course for their tack or gybe. Today we have probably seen more tacking for shifts than anytime before.

The windward mark is only a few metres from the shoreline which makes it quite spectacular and the water is just so flat that the riders can literally fly at more than 30 knots.

Riccardo Leccese won the first two rounds of the Gold Fleet with a stellar performance and fighting head to head with the Monegasque Maxime Nocher, leaving the chasing group led by Olly Bridge 200m behind.

The Silver Fleet carries the Italian flag with the winners of the first two rounds, Beverino and Chiti, who are beginning to get the right feeling with the high speeds and the technicallity of the race course.

Around noon the wind died and switched to onshore - AP was flying ashore for quite a while before conditions stabilized and racing could commence again. 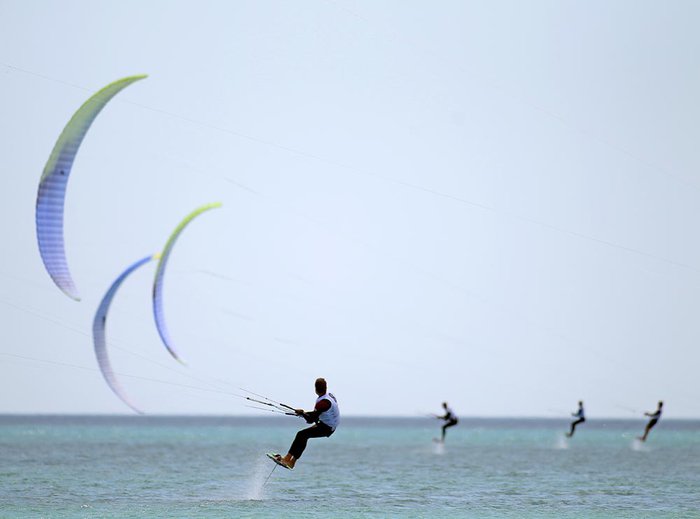 With even more shifty and gusty conditions, Leccese has some hard crashed pushing him down to 11th place, meanwhile Olly Bridge gets everything perfect from start to finish winning both rounds, pushing him up the leaderboard. Maxime Nocher keeps up with a 2nd and 4th place following a very late start after technical problems with his kite. Riccardo however manages to come back during the last round of today with a 2nd place. The top three are now only very few points away from one another, however with the first discard kicking in on day 4, the leaderboard will be reshuffled.

The Silver Fleet is led by the young Tuscan Giulio Chiti who gets better and better and reaches two 1st places. Excellent performance for Lucas Rey from Cagliari who takes home two 2nd places in the last two rounds of the day.

For the women the Russian Elena Kalinina leads unobstructed in front of the multiple time world champion Steph Bridge, the level is very high for both and neither of them can afford to make mistakes.

Six more races are scheduled for the final series, followed by 4 non-discardable races on Sunday.