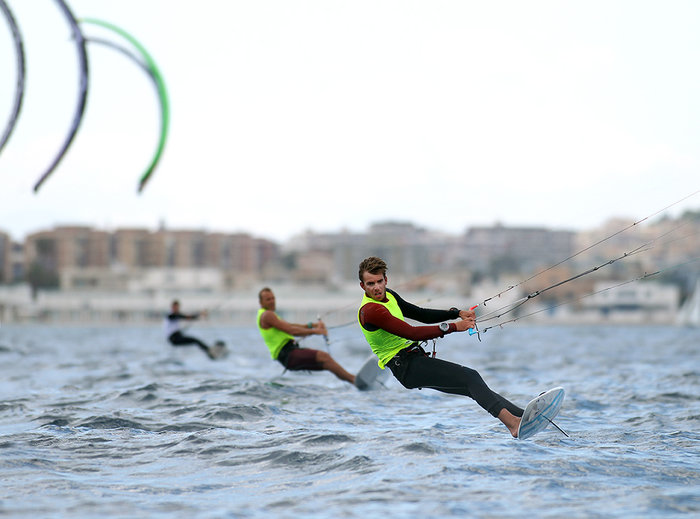 Cagliari, 20th May, 2016 – It has been a tough forth day at the European Championship Formula Kite and Foil Kite, taking place at the Poetto beach until May 22nd, with the organization of the Yacht Club Cagliari and the logistical support of the Italian Army.

AP was flying until after 14.00h, due to the whims of the North off-shore wind, which was unstable in its direction and intensity, certainly not good at all for the race competition.

While waiting on the beach the riders exchanged their views on the equipment and latest trends of a discipline that represents the maximum evolution in the field of sailing and which performance can be compared only to those of the America's Cup catamarans.

Only late in the afternoon once the Mistral had gone down and the thermic on-shore wind picked up the race Committee could start the competition and only 3 out of the six of the total scheduled races were completed.

Maxime Nocher (MON) won both rounds of the Gold Fleet, ahead of Riccardo Leccese (ITA) and Oliver Bridge (GBR). However Riccardo gets back to the provisional lead thanks to the possibility of discarding (after the fifth round) the 11th place of yesterday. Oliver Bridge is 3rd overall and 1st in the Under 21 category when we are only one day away from the so long-awaited final on Sunday.

Nothing changes in the women's ranking where Elena Kalinina (RUS) increases her advantage over Steph Bridge (GBR).
"Despite the fact that the wind during these days has been particularly challenging, all the athletes are very happy with the championship and surely one can't say that regattas have no thrilling!" stated Mirco Babini, the President of the International Kiteboarding Association, "Cagliari is one of the best locations in the world and the International Kiteboarding Association is considering to hold yet another global event next year too".

Overall standings after 6 races (gold) and 5 races (silver), and 1 discard