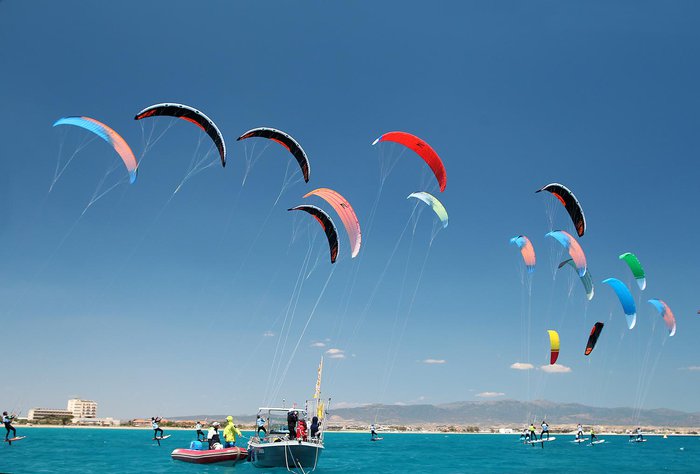 Cagliari, 21st May, 2016 – It has been a very intense competition day, with nine rounds for the entire Fleet. Tomorrow in the medal series, the top 10 men will race in the platinum fleet, then the remaining gold fleet, and the silver fleet including the medal races for the women. Each fleet will race 4 non-discardable single counting races that will add to their current final series score.

The defending world champion Nocher took back the lead of the fleet, by remarkably scoring four 1st places out of four, behind him the battle was on fire! Today, in addition to his main rivals, Riccardo Andrea Leccese and Oliver Bridge, there was the pressing Florian Trittel Paul and amongst others the young Croatian Martin Dolenc, age class 2000, Under 18 world champion and rising star of the fleet; the Slovenian Toni Vodisek, who realised an authentic climb up to the center of the top ten and the Polish Blazej Ozog.

Poland is the only nation who deploys two athletes, Blazej Ozog and Maks Zakowski, in a Medal Fleet which represents the entire Europe: from the Principality of Monaco (Nocher) to Great Britain (Bridge), Italy (Leccese), Spain (Trittel), Croatia (Dolenc), Slovenia (Vodisek, another Under 18 athlete in the final), Germany (Gruber) and Austria (Geislinger).

The Under 21 Russian Elena Kalinina is projected towards the women's title. Since Monday she has firmly taken the lead, leaving to the British Steph Bridge, the new role of chaser but leaving open for tomorrow a splendid duel for the title.
Although several places seem to be settled already, with 40 points on the line for the medal series and no discards, any mistake can costs places or the podium.

All racing action will be transmitted live at https://www.facebook.com/IKA.Events.Live/