Blast from the past, half of these guys switched from asymmetric speed boards to course raceboards that look like they are from 2011-2013. 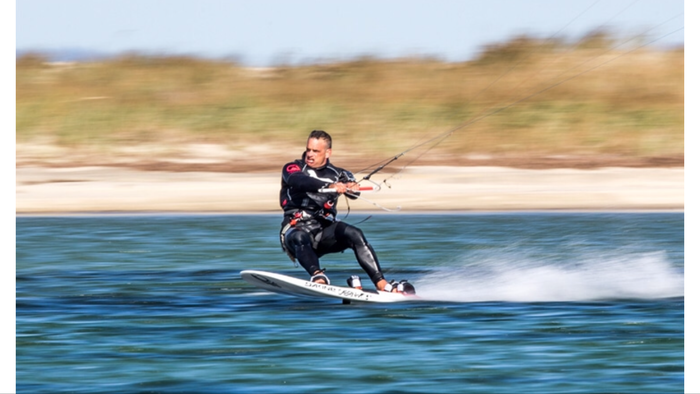 The second stage of the 2016 IKA Kitespeed World Championships run a total of 14 races with average wind speeds of 17 knots, and gusts of 35 plus knots.

The event attracted the stars of speed kiteboarding including the Douglas clan, Alex Caizergues, Sylvain Hoceini, and David Williams.

Despite battling cancer, Rob Douglas won ten of the 14 races, and his worst results are second place finishes. The American kiteboarder is the undisputed 2016 world champion, and he dedicated his world championship victory to all individuals and their families who are fighting cancer or who have fought cancer.

"I am very proud, happy and blessed to have won my second Kitespeed World Championship. Congratulations to Alexandre and Sylvain for their second and third place finishes. Special thanks to Bill Lynch for his sponsorships and his continued support to the sport of speed sailing," expressed Rob Douglas.

Interestingly, Rob was not the rider with the best speed. The fastest rider was Jamie Douglas, who rode his kite at 48.173 knots, followed by Caizergues with 47.850 knots, and Rob with 47.509 knots.

But at the speed challenges in Luderitz where they break records they use twintip a from what I know.

Interesting gonna be what happens if they use hydrofoils...must be a bitch to control at that speed?

Will depend on the design of the wing

Toby wrote: ↑
Fri Mar 31, 2017 2:39 pm
at the speed challenges in Luderitz where they break records they use twintip a from what I know.
Interesting gonna be what happens if they use hydrofoils...must be a bitch to control at that speed?

your wording is great Toby "from what I know"!
All serious speed kite boarders have custom boards.
Not even one (1) KBHF design at this time is even close to going faster!
BUT,
Course racing nothing beats a KBHF!
R H
Top

My current understanding is that for top speed, "speed boards" have ruled for years.

"Speed Boards" look like someone started with a narrow twin tip, and started cutting away lots of material. They are usually asymmetric (not just uni-directional, but asymmetric, so you need two boards, one for port tack and one for starboard tack. You cannot ride one board back to where you started!)
example:
http://www.f-onekites.com/Home/103/Prod ... side_0.jpg

I know several KBHF have exceeded 40 knots, but I haven't heard of many going much faster. Maybe someone knows of one that's hit 45 knots?

Just recently, the speed guys have started using old style (narrow) "Race Boards". The kind that were used for course racing until KBHF became dominant. I don't think anyone's set the outright record on them, but if the wind isn't strong enough to set a new record on a Speed Board, then these narrow Race Boards end up going faster for that day of a speed event.
example:
http://www.mackiteboarding.com/content/ ... d-2011.jpg
Top

Impressive. Rob Douglas and Morgan Douglas and Jamie Douglas... all in the top 6.
Are those guys brothers nephews kids?
Or just groupies that changed their last name?
Top

Peert wrote: ↑
Sun Apr 02, 2017 8:35 am
Impressive. Rob Douglas and Morgan Douglas and Jamie Douglas... all in the top 6.
Are those guys brothers nephews kids?
Or just groupies that changed their last name?

Brothers. Rob is oldest, then Jamie, Morgan. I spent a few years with them in my teens/twenty's. Great guys.
Top
Post Reply
7 posts • Page 1 of 1