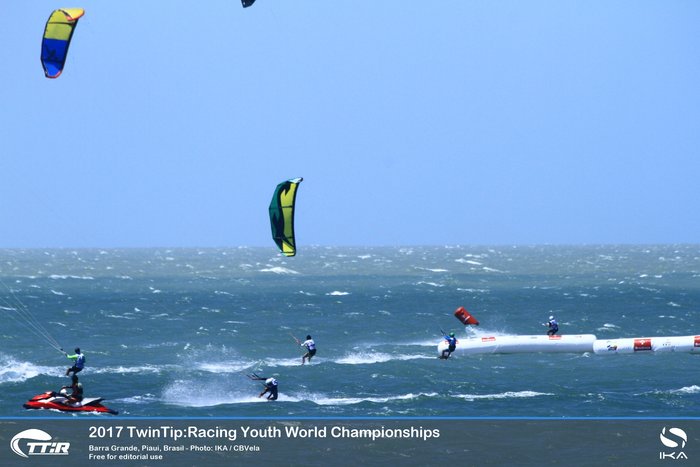 It was rather complicated to get to Barra Grande for everyone involved in the 2017 TT:R Youth Slalom World Championships but the stakes were high and 54 young kiteboarders from 11 countries went into the adventure of traveling to the paradise like beach on the north corner of Brazil to battle for the world championship title, get some valuable practice and experience in the Youth Olympic Games format and earn extra berths for their country in the YOG qualifying events in early 2018.

Barra Grande rewarded them with warm strong winds on a golden sandy beach and an excellent event organization. Challenging conditions ensured fast runs, high jumps and a lot of fun for the competitors, who seemed to come back after every heat with huge smiles on their face.

Just one rider from the USA was enough to bring the title to the country where kiteboarding first appeared.

15 years old Cameron Maramenides went kiting for the first time when he was just months old on his dad’s Dimitris’ shoulders. At the age of two he was standing on Dimitris’ board and at four he was riding his own board with a tiny kite, unhooked. When his dad got a custom-made harness for him at the age of six, Cameron thought it was easy!
He has been freestyling since then until last June, when his stepmom Helen read something about the YOG and they decided to give it a go.

Support but also expectations for performance in school are the norm and Cameron ‘just’ made it to the worlds, after scoring the ‘required’ grades in the first semester. Once he got to Barra Grande though, everything went his way.

He got a big lead with four first places in the first two days and that afforded him a few mistakes and tangles in the following days. Next challenge for Cameron, as with many of the competitors in the event, will be to get a spot to compete in the YOG, but for now he wishes he could stay in Barra Grande. Perfect wind, perfect location, fun kiting and so many good riders. As the venue was so remote and it was an adventure to get there, he didn’t expect a big turnout but all the top guys were there, plus a few very talented newcomers, like Manolo who finished second. 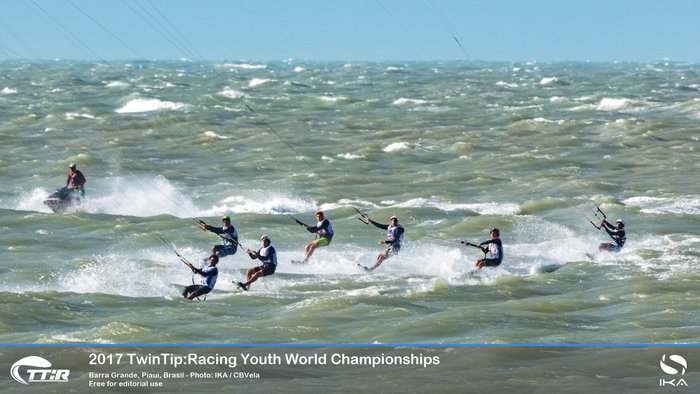 ‘Manolo’ is Manoel Soares Dos Santos Neto. He comes from the north of Brazil and is part of the Brazilian Kiteboarding Association Program. A thrilled Augusto Sampaio, president of the Brazilian kiteboarding association, the ABK, said that it has been very hard to organize such an event but his dream has become true this week, both with hosting the best young kiters of the world in such an important competition but also through Manolo’s silver medal and the performance of the rest of the team.

He is the heart of the ABK, organizing lots of events every year and although TwinTip Racing is very popular and there are hundreds of entries at the events, the kids are training with very limited recourses and with minimal support from the government and the sailing federation, the CBV. Augusto hopes that the results will draw the attention of the CBV to the potential of the kiteboarding youth and it seems that his hopes will be heard.

Walter Boddener, Events and Youth Manager of the CBV who followed the competition closely and was one of the key contributors to the success of the event, was impressed by the level of the competition and of the Brazilian riders. Lots of new talents and an amazing silver medal that was a pleasant surprise. He admits that although kiteboarding is very new for the Brazilian sailing community, for sure there will be support towards the YOG in co-operation with the NOC and he hopes to see Brazilian riders in Argentina.

Argentina, as the organizers of the 2018 YOG have an entry in both boys and girls but they want to go further than that. TT:R is already popular in the country and attracts kiteboarders of all ages in the competitions. The kiteboarding association is working very closely with the sailing federation and are trying to use the YOG as a vehicle to bring more youth to the sport.

Mario Sampaolesi, the Argentinian coach, says that kiteboarding is exciting, is youthful, is cool, is urban. There are lots of locations in Argentina which are ideal for kiteboarding and TT:R can be for everyone. It is affordable, it easy to learn and get on the water, it is the perfect tool to bring more people close to sports in general. Our primary goal, he says, is to create a better society, we believe that good results will follow.

On the other side of the world, the Thai kiteboarders are working hard too. With the Asian and Oceanian qualification event in Thailand in March, Sarun Rupchom, one of the top ranked TT:R riders in the world and Nichanan Rodthong traveled to Barra Grande but there are a lot more kiteboarding back in Thailand. For the same reasons as in Argentina, TT:R racing is becoming more and more popular and Narapichit ‘Yo’ Pudla, the Thai coach, expects to see a good number of countries battling for the single available qualification spot.

Europe will probably be the hardest fought continental qualification with many good riders from a good number of countries. The best European, Victor Bachichet, the reigning European champion, only managed to finish third in Barra Grande. ‘It was a cool event with lots of wind and lots of tangles. Maybe I should start training with boots, it was hard to keep the board on my feet’ he laughs. He now plans to focus in preparing for the European qualification event in Dakhla and try to qualify France but also manage to come on the top of the French riders and get the ticket to Buenos Aires.

A difficult feat as Benoit Gomez and Anthony Picard follow closely, finishing fourth and fifth. For sure tough in-nation competition from a country which seems to dominate in all forms of kiteboarding events. France was the leading nation once more, not only in the boys but also in the girls’ fleet, where three French were among the top six, led by a thrilled Lola Ulrich winning the silver medal. Lola had a lot of fun in a completion that tested her physically and mentally. She is planning to train hard and try to qualify both her country and herself to the YOG. ‘It is a dream but suddenly it is approaching fast’ she said.

To realize her dream, she will have to get the best out of Nina Font Castells, the European champion from Spain who finished third in Barra Grande and the strong Italian team which seems to have several girls, lead by the unstoppable Sofia Tomasoni who couldn’t believe that she won. ‘When I came to Barra Grande I did not expect that she will finish first but there was strong wind, there were many races and I won a lot of them!’ Only now she realizes that there is a possibility for her to participate in the YOG and she plans to work very hard to earn her place. ‘If I qualify I will start thinking about it. One step at a time’

Markus Schwendtner, CEO of the IKA and race director for the event was also smiling at the end of the races. Barra Grande delivered perfect but challenging conditions, for both competitors and organizers. The ABK and the CBV delivered a great organization both on and off the water. 180 starts, 230 penalty calls and more than 200 rescues in five days of completion. He was impressed by the grassroots work done by the ABK, full of praise for the performance of the Brazilian sailors and he looks forward to return to Brazil in the future. For the time being, just like the riders, IKA will focus on the delivery of the qualification events.

The list of the additional places each country is entitled to for the qualification events, further to the one entry per country, will be published soon and the first event is just six weeks away. 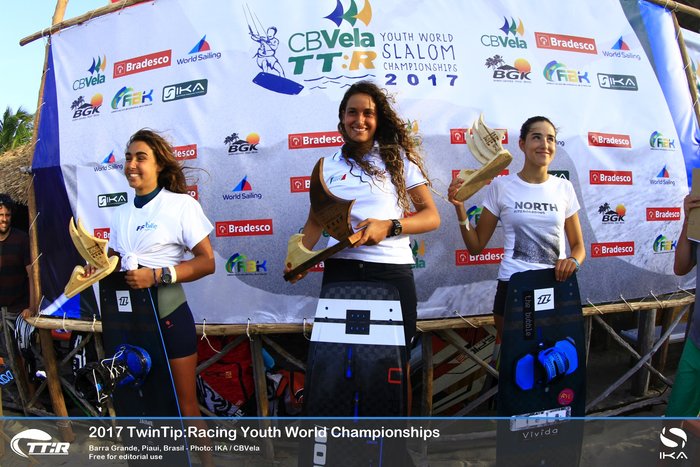 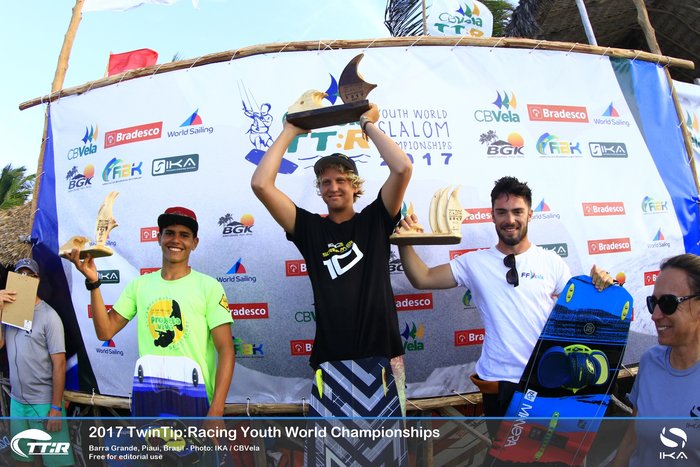