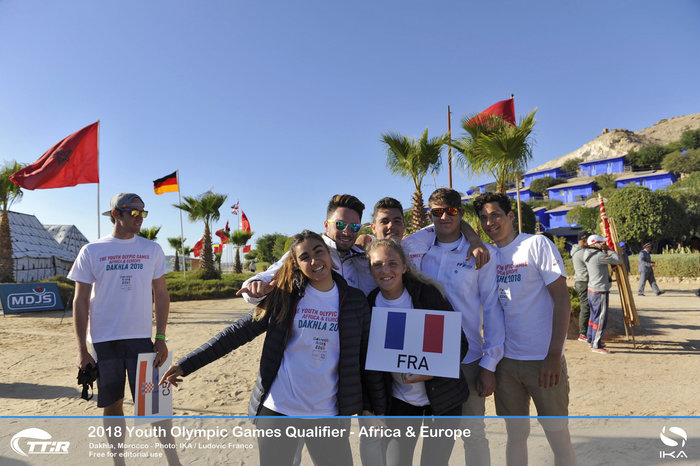 The prospect of a place on the Youth Olympic Games’ (YOG) stage—or better, a medal—has seen a dramatic transformation in the way kiteboarding is viewed, with national teams pouring unprecedented resources into their efforts to secure a spot.

The largest teams at the qualifying event for Europe and Africa being staged in Dakhla, Morocco, now all boast coaches to give their young riders the best possible chance of securing one of four coveted spots on offer for the Games in Argentina.

The “Olympics effect” has already been seen in the dramatic upsurge in interest at a national level as young riders have flocked to competitions in the International Kiteboarding Association (IKA) Twin-Tip:Racing (TT:R) format specially designed for the YOG.

But on the second of the five-day competition in Morocco, hosted by official sponsor Hotel Dakhla Attitude, the wind was largely absent, preventing racing. The forecast for the forthcoming final three days looks promising, however, giving the winners of the respective divisions, a boy and girl each from Africa and Europe, the chance to earn a YOG berth.

The Dakhla qualifier hosting 61 young riders under 19 years—50 from Europe and 11 from Africa—is the second event after Cabarete, Dominican Republic, and will be followed by another in Pranburi, Thailand, for the Asia and Oceania region. The final chance for qualification will come at the TT:R Youth World Championships in Hainan, China, in May, completing the line-up of 12 boys and 12 girls who will compete in Buenos Aires in October.

With so few places on offer for Europe in Dakhla—just one boy and one girl—the biggest and best resourced teams are already planning to attend the Worlds in China as part of their campaign to bag YOG spots.

Antoine Weiss, with the French team of six boys and girls in Dakhla, has been coach for almost a year, helping Victor Bachichet win the TT:R European Youth title. The French Sailing Federation (FFV) funds Weiss’s position and that of a physiotherapist to ensure their young athletes are in peak condition.

“With the Olympics everything has changed,” said Weiss. “Before we just had a lot of fun kitesurfing. But with TT:R in the Youth Olympics, that was a big change. The Olympics are a big goal for us in France. It’s a great opportunity that we’re eager to make the most of.”

France has five training centres spread around the coastline where the team members go for coaching, depending on where they live in the country. It is another measure of the national emphasis the country places on securing a medal.

Britain’s Steph Bridge is the honorary coach of the small British team that includes sons Tom and Guy. But although her resources are more modest than others fighting for contention, she recognises the positive effect Olympics’ inclusion has had on kiteboarding.

“When we start talking [Olympic] rings, then we start to see money appearing for coaching,” she said. “That kind of thing makes it more professional. The [World Sailing] Member National Authority gives support as they want their country to come back with a medal. It’s positive for the sport as it attracts more attention and more people get involved in kiting.”

Veteran racer Alejandro Climent Hernandez is a relative new-comer as coach of the Spanish riders composed of three boys and four girls, among them Nina Font Castells, the European Youth Champion and runner-up at the Youth Worlds in Brazil.

By contrast Simone Vannucci has been coach for exactly a year to the largest team in Dakhla, the 10-strong Italian squad. His position is funded by the Italian Sailing Federation (FIV), which places enormous emphasis on its youth programme.

“I think the kind of experiences the athletes have in these kind of events will stay with them for the rest of their lives, whether they ultimately stick with kiteboarding or not,” said Vannucci. “These experiences of competing and meeting kids who speak different languages, that’s something they can’t learn in school.”

The Italian team were among the many young riders who were keen to interact with a group of 35 local Moroccan children who came to the event to share the stoke of kiteboarding.

Aziz Ouakrim, of the Association of Dakhla Lagoon, organised the trip. “These kids are from local schools and associations and we wanted to give them the chance to discover kitesurfing while this international event is on, as kitesurfing is becoming bigger and bigger in the area.”
Top
Post Reply
1 post • Page 1 of 1