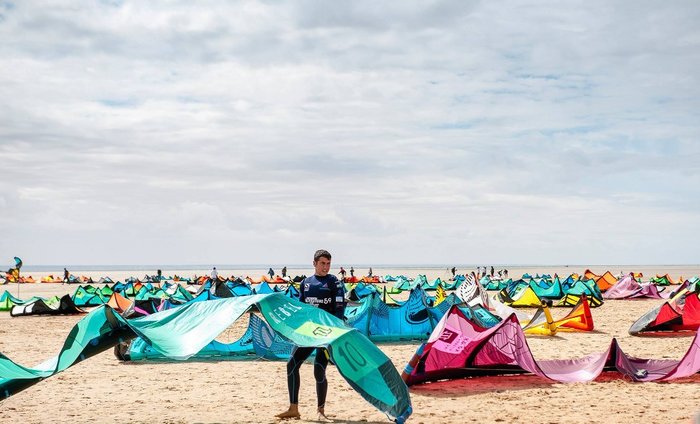 Dakhla, Morocco - It was a day of ups and downs as young kiteboard racers from Africa and Europe fought each other and the challenging conditions as they opened their bids to land a place in the upcoming Youth Olympic Games (YOG) in Argentina.

The first day of racing at the International Kiteboarding Association (IKA) Twin-Tip:Racing (TT:R) regional qualification event in Dakhla, Morocco, finally threw up strong winds that hit more than 30kts, in stark contrast to the light breezes that dogged the competition’s opening two days when no racing was possible. On day three of the five-day contest, the wind blowing over Dakhla’s renowned flat-water lagoon built so quickly and with such ferocity that most of the riders deployed each of the four variously-sized kites they had registered for the event. The variable conditions for the high-octane TT:R slalom-boardercross format, specially-designed for YOG in Buenos Aires in October, saw the leads change hands after race officials staged two elimination rounds for the African and European boys and girls’ divisions who were competing in separate groups.

France’s Benoit Gomez clawed his way to the top of the pile in the boys’ European division with a series of gritty performances that earned him a valuable top spot in the first elimination round, and a second in the second that secured him the overnight lead in the standings. “The wind was good for the first elimination round, but in the second it was a bit light for my 13m kite,” said Gomez. “So, I’m happy to find myself in such a good spot, especially as there are so many other good riders, some of them my team-mates. We, French, are here for all the competition.” Gomez just tops Croatia’s Martin Dolenc, the senior European TT:R title holder. The usually unerring Dolenc had a mixed day when he and a group other riders were disqualified from the first elimination round final for crossing the start line early, though he was able to repair some of the damage with a third in the second elimination final.

The quick Slovenian rider, Toni Vodisek, stands third overall in the European division. His similarly difficult day, when he failed even to make the first elimination round final and then won the second, illustrates just how tricky it can be to achieve consistent performances in the format with all its potential for dramatic tangles at marks rounded at full speed by riders barely meters apart.

If anything, the women’s European division was even more topsy-turvy, with several riders taking the top spot in one elimination round final, only to post a poor showing of even fail to make the day’s other elimination final, pushing them down the standings. Nonetheless, Italy’s Sveva di Marcellinara was pleased with her fourth spot overall in the standings given the tricky conditions and that she was still fine-tuning the set-up of her specialist Upeksha Gawa slalom board. “Now I’m happy,” said di Marcellinara, who won her second elimination round final. “After that first race, I was far from happy. In the second elimination round, I had a very difficult early heat and I was a bit scared. But I realized I was fast and it gave me a lot of confidence.”

The European girls’ division is topped by current TT:R Slalom Youth World Champion, Sofia Tomasoni (ITA), who posted consistent high-placed finishes in both the day’s elimination finals, and sits just above France’s Lola Ulrich. In the African’s division’s smaller fleet local favorite Jonas Ouahmid (MAR) won both his races. But he was penalized for receiving outlawed outside help to change his kite size, putting him second on the leaderboard just behind South Africa’s Pieter Botha. Johane Botha (RSA) swapped first and second spots with her countrywoman Rut Gouws, to take first and second respectively in the standings.

The winners of each of the four divisions at the Dakhla event, being hosted by official sponsor Hotel Dakhla Attitude, will earn direct qualification for the YOG, while others could still stand a chance of qualification at the IKA TT:R Slalom Youth World Championships in Hainan, China, in May.