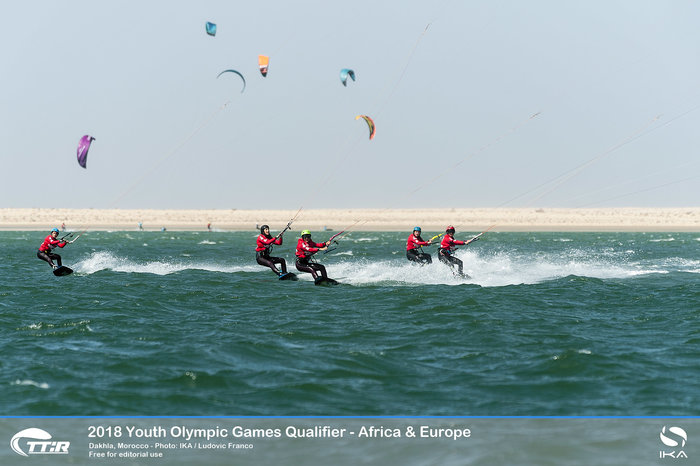 The battle for the sole slot in the girls’ European division for the forthcoming Youth Olympic Games (YOG) kitebaord racing discipline saw perhaps some of the most keenly fought contests at the qualifier being staged in Dakhla, Morocco.

Margins between the top girls are so fine that even after exhaustive heats in the pulsating Twin-Tip:Racing slalom-boardercross format, the push for the line in the elimination round deciders often ended tense photo-finishes.

But on the penultimate day four of the International Kiteboarding Association (IKA) qualifier, Italy’s Sofia Tomasoni stood on top of the pile in the European division after a series of dominant performances, though still only a few points separated her from her nearest rivals.

Tomasoni, recently-crowned IKA TT:R Youth World Champion in Brazil, is well aware that everything is still to play for going into the final day of competition being played out on the flat waters of Dakhla’s fabled kiting lagoon in tricky breezes that often top 25kts.

The winners of the four divisions—one each for African and European boys and girls—will earn direct entry to the inaugural kiteboard racing event at the Youth Games in Buenos Aires in October.

Riders from Asia and Oceania will get their chance to qualify in Pranburi, Thailand, next month, with the last of the total of 12 slots each for boys and girls on offer at the TT:R Slalom Youth World Championships in Hainan, China, in early May.

Day four of the Dakhla event saw the 61 young racers, 50 from Europe and 11 from Africa, spend long hours on the water as race officials squeezed in three elimination rounds made up of scores of short, high-octane downwind slalom races.

In the boys’ European division Slovenia’s Toni Vodisek seemed to be improving all the time and scooped two elimination round wins, though he faltered in what was almost the last race of the day when posted a disappointing fifth spot.

Yet with discards after three and five races in the breezes that stiffened from 18kts early in the proceedings to 24kts, Vodisek was able to displace the overnight leader, Benoit Gomez, and go top of the standings.

Undoubtedly quick, Gomez suffered the misfortune of picking up penalties for touching other riders’ kites at the tight mark roundings, illustrating just how difficult TT:R can be as competitors jockey for place while pushing at full speed.

In the African qualifying races Morocco’s Jonas Ouahmid again barely skipped a beat, winning almost every time, though he was occasionally bested by South Africa’s Pieter Botha who sits just behind on the leaderboard.

South Africa’s Rut Gouws displaced her fellow countrywoman Johane Botha at the top of the standings for the African division with a series of pacy and confident performances.

But it was Tomasoni’s virtually flawless outing in the face of the stiffest competition in the European division that show she has a real chance of taking the YOG slot if she sticks to her game plan that has worked so far.

“Like everyone else I have bad starts, which is nearly the most important part of the race,” she said. “But the thing that works for me is to stay focused. In the heats you just need to finish in the top three to advance. Then in the elimination round decider I just take risks and go for it. It’s so much fun.”

Spain’s Nina Font Castells, the reigning TT:R Slalom Youth European Champion, moved up to second spot on the leaderboard courtesy of a series of strong performances and a discard that allowed her to dispense with a disastrous second elimination round.

“For me now that we’ve done more races you begin to know a bit more about the other riders around you,” she said. “You never really know what’s going to happen in a race, but you have a better idea of what someone might do. I’m just doing my best. I’m having fun and I love racing with my mates.”

Full rankings and live elimination ladders with scoringcan be found at: www.twintipracing.com