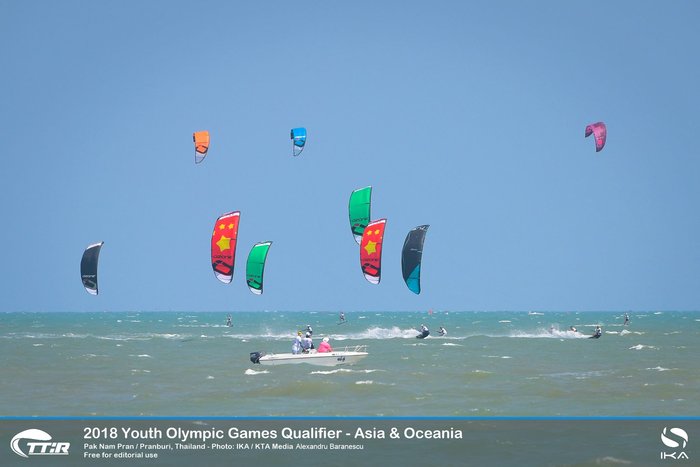 The opening exchanges in the hotly-contested battles to secure a spot to fight for kiteboarding’s first medals at the upcoming Youth Olympic Games (YOG) saw young riders push to the limit in glorious racing conditions in Thailand.

In thermal breezes that freshened to about 20kts under clear tropical skies, the young competitors fought tooth and nail for the four slots available for the Asia and Oceania regions.

With such high stakes due to the limited number of places—just two for boys and two for girls—the contests in the fast-paced TwinTip:Racing (TT:R) Slalom discipline was intense, with white-knuckle photo-finishes and spills as the wind picked up.

But on the first of five days of competition at the Iconic Kitesurfing Youth Olympic Qualifiers, organised by Kiteboard Tour Asia (KTA) and the Kiteboarding Association of Thailand (KAT), several riders signalled their intent with dominant performances that saw them top the standings in the respective boys’ and girls’ divisions.

Perhaps the biggest surprise was Thailand’s Sarun “Nai” Rupchom. He won almost every one of this races. With near impeccable timing he seized the vital lead at the startlines, allowing him to round the first mark ahead. From there he dominated the five downwind legs, had clear water at the obstacles, and took the wins. 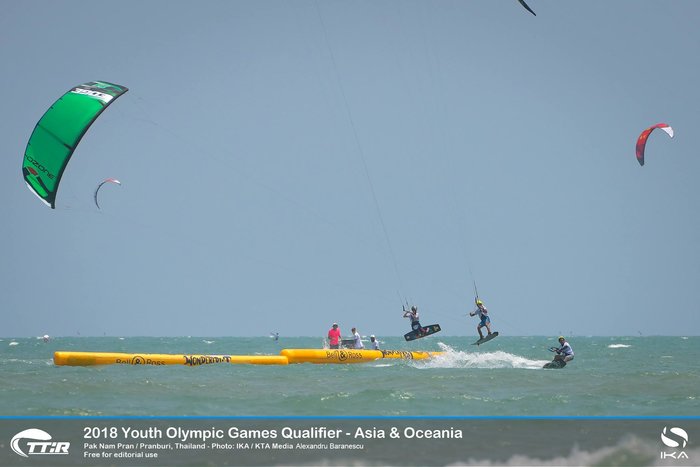 Yet even Rupchom showed he was not infallible. In the day’s last elimination round decider Rupchom crossed the startline fractionally early and was disqualified OCS, though the error was not too costly as the 17-year-old was able to discard the score from his tally.

“I’m getting good starts,” said Rupchom, just before he faltered. “The start’s so important because it means I can get to the first mark in the lead. Then after that it’s very difficult for anyone to pass if I don’t make a mistake.”

In his day’s last race his mistake allowed the Philippines’ Christian Tio, a freestyler more than a racer, to take the elimination decider win and push him up to second overall in the Asia boys’ division.

With each race he believes he is improving his tactical appreciation. But he acknowledged he faces fierce competition from the Thailand team and the strong Chinese riders in the International Kiteboarding Association (IKA) TT:R Slalom format specially design for YOG in Argentina in October.

“It’s really tough, much tougher than I expected,” said Tio,16. “Everybody’s been training really hard for the Youth Olympics, and now everyone’s fighting really hard for that place. I’ve adjusted my tactics a bit to try to get better starts. I’ve also been trying to tum more quickly at the marks.”

In the girls’ Asia division China’s Jingle Chen, the reigning senior TT:R Slalom World Champion, blotted a perfect record in her day’s last race when she crashed her 11m kite rounding the second mark at full speed in the lead, allowing her team-mate Kewen Li to take the win.

But Chen, who had otherwise dominated the group with her pace and tactical nous, could laugh off the slip up. She, too, was able to discard the score to give her the overall lead.

“I feel comfortable that I’m controlling the races,” said Chen. “But I realise the other girls are getting faster and faster the more they race. So I’ll I have to be on my guard in the days ahead.”

If anything it was a day of minor slip-ups for the leading contenders. Australia’s Mani Bisschops, in his last race in the Oceania division, seemed to have a clean sweep of wins in the bag when he caught a piece of chop and briefly crashed.

But he fought his way back into contention and was lucky enough to see his rival, Arron Kenny (AUS) suffer the same fate on the next downwind leg allowing Bisschops to regain the lead and take the win to stay top of the leaderboard.

“I think my kitefoil racing experience has really helped me a lot,” said Bisschops. “Although the TT:R starts are quite different from foiling, being able to use your watch and timing efficiently is really important.”