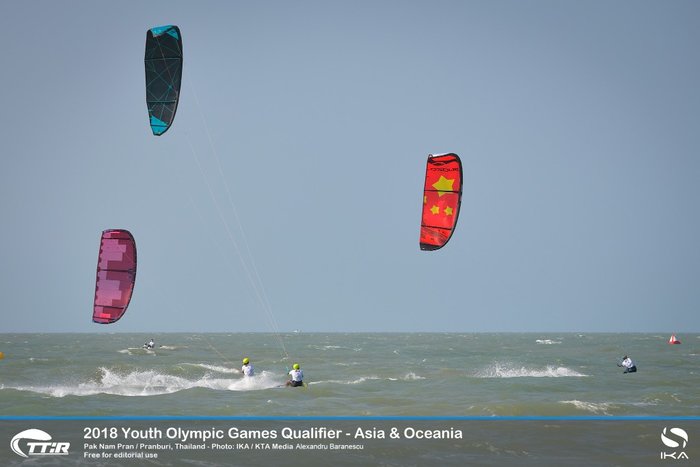 Intense battles at the Youth Olympic Games (YOG) kiteboard racing qualifiers being played out on the Gulf of Thailand’s pristine waters saw the leaderboard reshuffled as the top young athletes got faster, with little between the leading trio.

China’s Haoran Zhang climbed to the top of the standings in boys’ Asia division in a day of gripping action on the water that ensured the lead swung back and forth in the tight TwinTip:Racing (TT:R) Slalom discipline that will be used in the upcoming Youth Olympics in Argentina.

The winners of competition, being organised by Kiteboard Tour Asia (KTA) and the Kiteboarding Association of Thailand (KAT), will earn the right to fight for kiteboarding’s first Olympic medals in Buenos Aires in October.

Two boys and two girls from Asia and Oceania will go through from the Pranburi event, which follows other regional qualifiers in Cabarete, Dominican Republic, and Dakhla, Morocco, with the final eight slots available at the TT:R Slalom Youth Worlds in Hainan, China, in May. 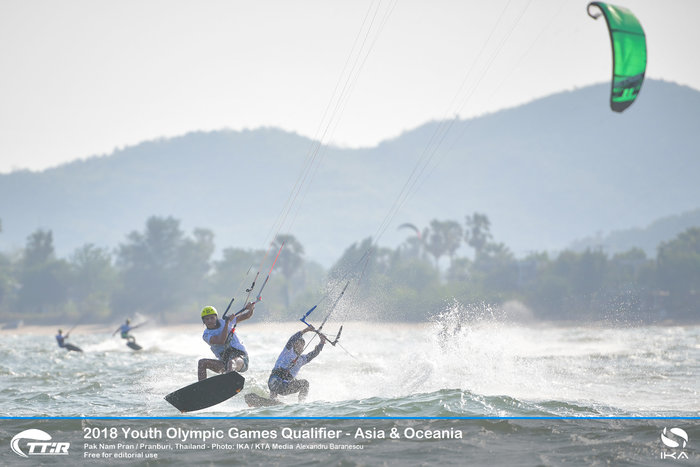 In the Oceania division the seasoned kitefoil racer Mani Bisschops (AUS) appears to have the spot in the bag barring disasters as he has won every one of his races and is clear at the top of the leaderboard, while Pia Kitchin Gordon (NZL), racing in the mixed fleet, is assured of a spot as she is the only girl in the group.

But with three days of competition left, there is everything to play for in the boys’ Asia group. The second day delivered excitement in spades as the overnight leader Sarun “Nai” Rupchom, who had looked unassailable on day one, faltered.

In the day’s first elimination final Rupchom broke a bridle line on his 13m kite in the dash for the first mark and was out of the race. His ill-luck was compounded by a series of poor starts that left him playing catch-up with his closest rivals.

But in his efforts to close the gap in the other elimination deciders, he made more errors, hitting the obstacles or crashing in the increasingly-gnarly conditions, leaving him second on the leaderboard, a point adrift of Zhang.

“It’s just not my day today,” said Rupchom. “In one of the elimination finals I started third and got to second. But in pushing for first place I hit the obstacle and crashed. But there’s plenty of racing left and I believe I can come back.”

Zhang capitalised on Rupchom’s mixed fortunes, using his growing experience of the track and the conditions to take three first spots on the day.

“It feels good,” said Zhang. “I had a great day. It wasn’t perfect, but I feel I’m getting faster. I definitely feel a lot more confident than I did on the first day, though the racing’s getting closer and closer.”

Zhang also sits just ahead of rising freestyle star, the Philippines’ Christian Tio, who also upped his game on the second day of competition with a win and a clutch of seconds to take third spot on the leaderboard, equal on points with Rupchom.

“I think I’m getting used to the conditions here now,” said Tio, explaining his improved showing. “I liked today’s stronger winds. I had good power in the kites. But the Chinese guy is very fast. I just have to go faster to beat him.”