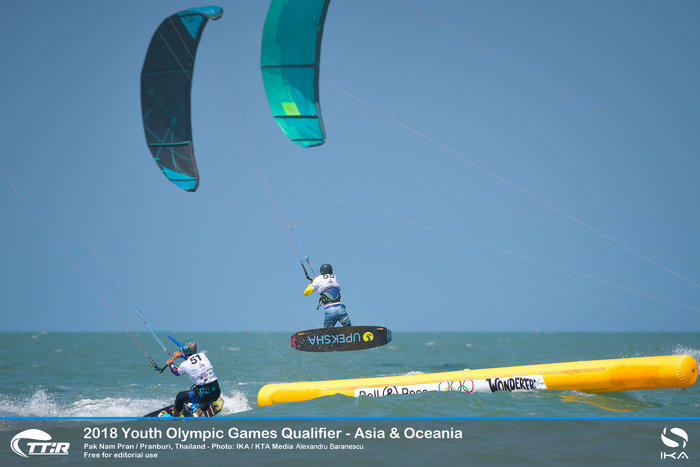 None of the top contenders in the hotly-contested boys’ Asia division at the Youth Olympics Games (YOG) kiteboard racing qualifiers in Thailand had it all their own way in a day of dramatic ups and downs.

But local favourite Sarun “Nai” Rupchom—whose home waters off Pranburi’s Paknampran Beach are hosting the unfolding drama—again climbed to the top of the leaderboard, but only by the finest of margins.

Rupchom notched up two wins in the vital elimination round deciders in kiteboarding’s fast and furious International Kiteboarding Association (IKA) TwinTip:Racing (TT:R) Slalom discipline, but crashed and suffered a poor start in two others that put him down the order.

Yet his performances on day three of the Iconic Kitesurfing Youth Olympic Qualifiers for the Asia and Oceania regions were enough to keep him just ahead of his Philippines rival, Christian Tio.

Both leapfrogged overnight leader, China’s Haoran Zhang, who won the day’s last elimination decider in perfect breezes of 20kts, only to discover he had been disqualified for being over the startline within one minute of the “go” signal.

Yet with two days of competition remaining and just one point separating the leading Asia boys’ trio, any of them could yet claim the sole spot and earn the right to go to the Youth Olympics in Buenos Aires in October.

Three other spots, one for the Asia girls’ division and a boy and girl each from Oceania, are up for grabs at the competition, organised by Kiteboard Tour Asia (KTA) and the Kiteboarding Association of Thailand (KAT).

In the Asia girls’ division, reigning IKA TT:R Slalom World Champion, China’s Jingle Chen, 17, was untouchable with another flawless day to keep her head of the leaderboard, a performance matched by Australia’s Mani Bisschops, who tops the boys’ Oceania division.

In the girls’ Oceania division New Zealand’s Pia Kitchin Gordon is the only entrant and is racing in a mixed group among the boys. But with growing confidence and speed she took several third places and a second that illustrated a marked improvement on her opening days’ forays.

Like all but five of the other competitors at the Pranburi qualifiers she is riding an Upeksha Gawa board specially designed for the downwind TT:R Slalom format that was crafted for YOG to foster excitement and spectacle.

Uniquely, of all the kiteboard manufacturers, the boutique Upeksha brand based locally in Pranburi was the only one to submit a specialist slalom design—the Gawa—for registration with the IKA for the Youth Games.

Coaches at well-funded and ambitious teams have had their riders testing the long and slender carbon-fibre Gawa boards for several months and quickly realised it could give their team members a crucial edge in speed and control.

Dahui Zhai, head coach of the Chinese national team, discovered the board could be a vital one or two percent faster—though others reckon as much as six percent quicker—and put his boys and girls on the Gawa.

“We’re really prepared to look for any advantage within the rules because this is so important to us,” said Zhai. “Take Jingle Chen, she’s been kiting since 2012, but some of our boys only started in 2016. So we have to try our best to find the best equipment to win the events and the places. I think it’s totally fair because the IKA made the rules. If it’s faster, that’s good for the event and for kiting.”

Bong Fernando, the Philippines’ team coach, is also sold. “For sure there’s a reason the team is using these boards. In my experience in TT:R the Upeksha Gawa has much better performance compared to a normal twin-tip. It has more speed and more grip. The other companies only registered normal twin-tips, but the Gawa is specially designed.”

Upeksha’s founder and director of engineering, Craig Chandler, has been excited by the reaction as more and more teams from around the world have been seeking out Gawa boards in the hope of securing places at the Youth Games.

“Right now, of the 10 places so far allocated for Argentina, six of the riders will be on our Gawa boards. By the finish of the event here in Pranburi, we very much hope we’ll add another three to that as most of the riders competing are on the board. It’s way beyond our wildest dreams.”

Re: Drama Starts to Unfold at Youth Olympics Qualifiers in Thailand