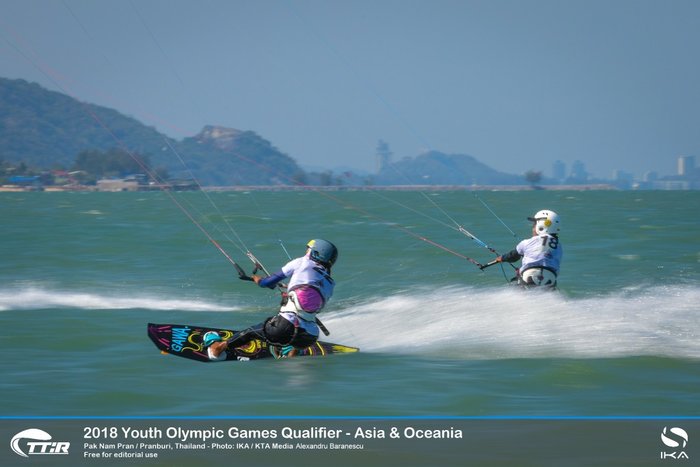 China’s Jingle Chen again proved untouchable at the Asia and Oceania Youth Olympic Games (YOG) kiteboard racing qualifiers, putting in another flawless shift to win all her races on the warm, flat waters of the Gulf of Thailand.

None of Chen’s rivals in the girls’ Asia division seemed to have any answers for the pace and consistency of the reigning TwinTip:Racing (TT:R) Slalom Open World Champion in the lighter 14kts breezes on day four of the qualifiers being staged off Pranburi’s glorious Paknampran Beach.

Chen has barely put a foot wrong and won every one of her races in the girls’ Asia division, giving her a commanding lead that almost assures her the qualification spot going into the final day.

But she will be looking to measure herself against the rather stiffer competition of the world’s fastest girls at the International Kiteboarding Association (IKA) TT:R Slalom Youth Worlds in Hainan, China, in May, where the last eight YOG qualification spots will be on offer.

“This may not be the hardest racing for me, but it’s really good training,” said Chen, 17. “At home in China, we don’t really get to train courses of obstacles and buoys. I’m having fun and still learning a lot, jumping the obstacles with better pop and down-looping the kite faster at the marks.”

Her closest rival at the Iconic Kitesurfing Youth Olympics Qualifiers, team-mate Kewen Li, has misfortune of following in Chen’s wake in every race. But as a kiter of just eight months’ experience she feels lucky to have chance to be part of the ambitious Chinese team.

“I’ve only ever done racing, but here with every heat I feel I’m learning so much,” said Li, also 17. “Having Chen in front of me always gives me something to aim for and I try to get as close to her as possible. I’m definitely getting faster and faster.”

In the girls’ Oceania division Pia Kitchin Gordon finds herself racing in a mixed fleet with the Oceania boys as she is the only entrant, guaranteeing her a qualification spot for the Games in Buenos Aires in October.

But the determined 17-year-old who has been racing for just three weeks has been getting quicker, notching up a clutch of third places finishes that had taken her to third on the leaderboard. But she slipped to fourth on day four after hitting the obstacle that pushed her down he order.

The highly-competitive Asia boys’ fleet at the qualifiers, organised by Kiteboard Tour Asia (KTA) and Kiteboarding Association of Thailand (KAT), threw up yet another change of lead after the Philippines’ Christian Tio topped the standings.

Tio’s consistency was in contrast to Rupchom, who seemed to be feeling the pressure, crossing the startline early and earning himself a costly disqualification in the day’s last elimination round decider.

The Philippines’ rider’s performances also gave him a clear lead in the standings over second placed Haoran Zhang, of China. Tio has clearly learned quickly since the opening exchanges of the competition, growing faster and fine-tuning his TT:R Slalom race craft.

“To tell you the truth I was a bit surprised at the start, seeing the level being so high here,” said Tio. “But I think I’ve now adapted to that level. I also know to hold a bit back and conserve energy in the heats, so that I can go for it in the elimination deciders.”

Brand Affiliation: None
Has thanked: 128 times
Been thanked: 151 times

Yeah super tough. Lol. Dreamed up to excite ioc lol All that noise about 3rd world affordability, youth development and female participation and out of all of Asia, Australia, NZ and the South Pacific.. and it amounted 5 girls (I checked.. did I make a mistake?) showing... Some of whom had only been racing for a few weeks.

It has to start at one point.
Next time will be more.
Top

Yeah possibly, it was more an observation that the selling point of kiteboarding was, youth participation, increased participation of poorer countries, and a youth development program. It was clearly all talk with no substance, none of the points realized whatsoever. Absolute fakery.

What is tough about showing up and automatically qualifying for the youth Olympics by... Simply showing up? I wouldn't be at all happy having my kids racing alongside such inexperienced riders.. far from safe.. didnt one of the youth competitors already lose some fingers I remember you saying.

Anyway good for the riders, but this is so far from the right way to do things.
Top
Post Reply
6 posts • Page 1 of 1