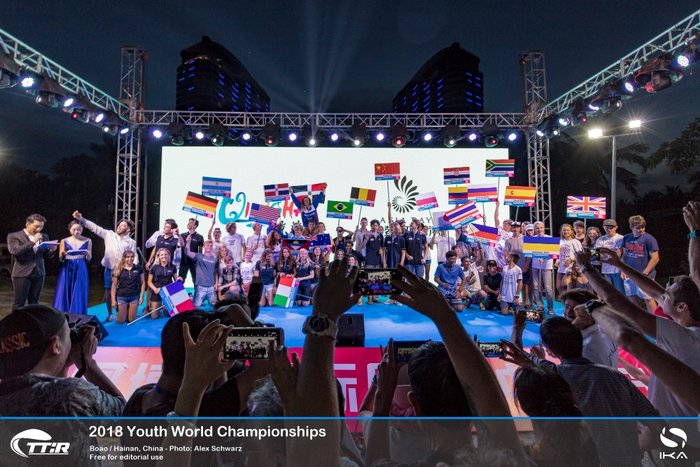 Most of the globe’s quickest young kiteboarders have gathered on China’s tropical Hainan island for an intriguing showdown to fight for the final spots to compete at the upcoming Youth Olympic Games (YOG) in Argentina.

The coveted TwinTip: Racing (TT:R) Slalom Youth World Championship titles to be fought out over the next five days of intense action will also serve as the stage for the YOG qualifiers, with four slots each available for boys and girls all under 19.

Twelve of the total of 24 places at the youth games in Buenos Aires in October have already been allocated at three International Kiteboarding Association (IKA) qualifiers in Cabarete, Dominican Republic, Dakhla, Morocco, and Pranburi, Thailand.

But with so many strong boys and girls still looking for a YOG berth to contest the inaugural kiteboarding medals after just missing out in their continental regional qualifiers, the world’s fastest have made the journey to Bo’ao’s Asia Bay to bid for spots.

Thirty-eight boys and 24 girls from 32 countries and all six continents will battle in the TT:R format of spectacular downwind slalom races specially-developed for the YOG to best showcase the sheer exhilaration of kiting.

Scores of six or eight-rider heats run over five downwind legs that last barely three scintillating minutes sort the quickest riders. When the wind permits, metre-high obstacles to be jumped are laid on the third and fourth legs, adding to the drama and lending a boardercross feel.

Yet the beauty of the format is its accessibility. The riders, all born between 2000 and 2003, must use registered production inflatable “tube” kites and registered twin-tip boards similar to the equipment used by most kiteboarders.

In the girls’ division China’s Jingle Chen, the reigning IKA TT:R Open World Champion will be up against the TT:R Youth World Champion, Italy’s Sofia Tomasoni. Both have already secured YOG slots but are looking to land the prized world title while honing their skills in the still-embryonic discipline.

Both will be pushed all the way by the current European TT:R Youth Champion, Spain’s Nina Font Castells and Germany’s Alina Kornelli But others in the strong Italian, French and Spanish teams will certainly be in the hunt for the Olympics places too.

Similarly, the boys’ TT:R fleet is the strongest assembled this year. Antigua and Barbuda’s Tiger Tyson and Mani Bisschops of Australia have already qualified, but are eager to measure their pace against the world’s fastest while hoping to bag the world title in the process.

France’s Benoit Gomez and Croatia’s Martin Dolenc, the European TT:R Open Champion, both missed out on Olympics places in Dakhla and will be hoping to put matters right in Asia Bay over the coming days.

But, as with the girls, the contests will be fierce. Freestyle star Adeuri Corniel (DOM) and the Cameron Maramenides (USA) were pipped in the North American qualifiers, while Thailand’s Sarun “Nai” Rupchom also came within a whisker of taking a YOG place at the Asia qualifiers.

The scene was set for the what is bound to be thrilling action on the water in the days ahead with a glittering opening ceremony overlooking the race track at Bo’ao’s Asia Bay Resort.

Full results, all elimination series results, and live scoring will be available at www.twintipracing.com
Top
Post Reply
1 post • Page 1 of 1