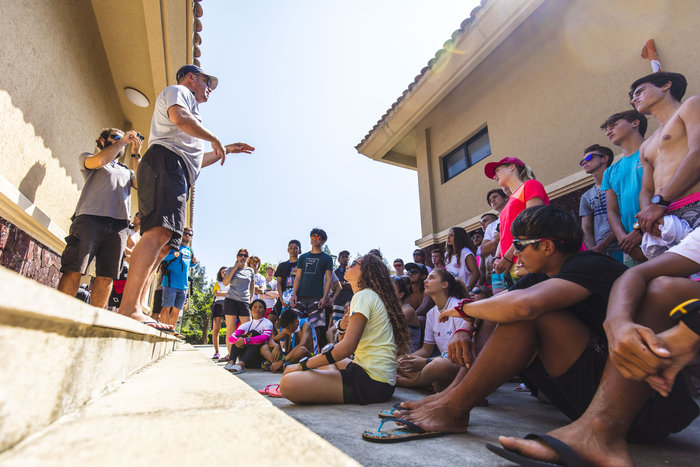 For the first time in kiteboarding, big national squads backed by their national sailing and kiting federations have made the trip to Hainan Island’s Bo’ao in the hope their young racers can land some of the remaining eight slots for the games in Buenos Aires in October.

While racing on the water is an individual effort the racers, all born between 2000 and 2003, have been revelling in their national team identities. Even smaller nations with fewer resources have provided backing, including team clothing, to foster national pride.

On the first of five scheduled days of racing at the International Kiteboarding Association (IKA) TT:R Youth Worlds on Asia Bay, which will also serve as a YOG qualifier, the wind failed to climb above the required 10kts necessary for fair TT:R Slalom competition. But the forecast for the days ahead look good.

The lay day under the tropical sunshine saw the 38 boys and 24 girls from 26 countries and six continents chill under the palm trees in their team groups as they waited in vain for the breeze to build, kites pumped and ready for action.

The biggest team of five boys and five girls, including reigning TT:R Youth World Champion Sofia Tomasoni, is that of Italy. It has been shepherded for more than a year by Simone Vannucci, his position funded by the Italian Sailing Federation (FIV), which also helps riders with equipment.

But the possibility of burnishing national reputations has also encouraged smaller, poorer nations like the Dominican Republic to find some resources for a coach, training, equipment and funds to travel.

With two boys and two girls in China, the squad has been training under top foil racer, Florian Trittel. He travelled to Cabarete from his native Spain to conduct week-long training camps every month for almost a year.

Trittel’s programme and the travel of the young athletes has been financed by the Dominican Republic Sailing Federation and national Olympic Committee through the Cabarete Kite Academy, which saw the potential kiting for personal development.

“For these four guys it is very much a matter of national pride to represent their country,” said Trittel. “But the people of the Dominican Republic are not wealthy, so these kids know the only way they can compete for their country is if they get support.”

Lola Ulrich, a member of the six-strong French squad which also boasts a coach, training programme and physiotherapist funded by the French Sailing Federation (FIV), is immensely grateful for opportunities offered by being part of the team.

“To be part of the team is great,” she said. “For me it’s definitely a super experience. I learned so much to get to a high level. There’s the technical advantages as we have more eyes and more brains to see things. In France we’re very, very proud of being French. I didn’t expect that, and I didn’t expect that journey. It changed me in some ways.”

The host nation’s four-strong Chinese team is also well-resourced by the China Yachting Association (CYA) which has seen the potential of kiting to grow in the country, while also being drawn by the hope of success on the Olympic stage.

Zhai Dahui, coach and team manager, has been training the squad for several years, but focused on TT:R when the youth games became a possibility.

“The main reason for the backing is that we have the opportunity to go into the Olympics,” said Dahui. “The Olympics is very important.”