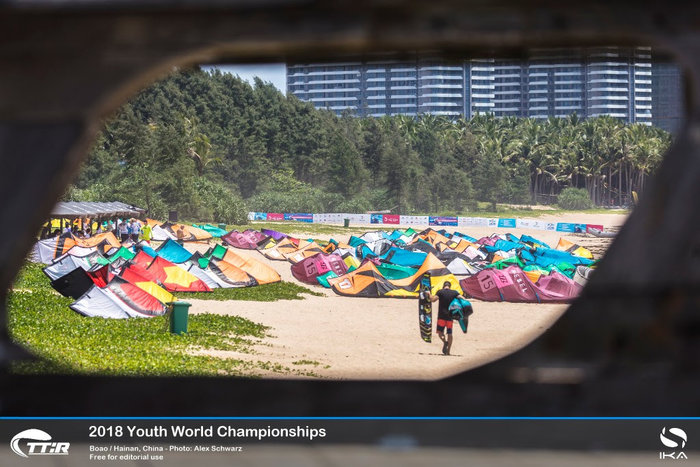 The appeal of the relatively new kiteboarding discipline of TwinTip:Racing (TT:R) Slalom for young athletes is underscored by the number of competitors who have travelled from all over the globe to battle for the Youth World titles in China.

The International Kiteboarding Association (IKA) TT:R Slalom World Championships -which also doubles as the final qualification event for the Youth Olympic Games (YOG) in Argentina- sees 23 nations fighting for four spots in the boys’ division and 14 nations going after another four in the girls’ group on the tropical island of Hainan.

For the 62 athletes all born between 2000 and 2003 the chance to land the remaining spots to compete for kiteboarding’s inaugural medals in Buenos Aires in October was an irresistible opportunity.

The downwind TT:R slalom/boardercross format specially-developed for YOG to foster easy accessibility for young kiteboarders is proving a perfect springboard to high-end kite hydrofoil kiteracing competition among the athletes who have caught the racing bug.

But on the second of five scheduled days of racing at the Youth Worlds the onshore breeze again failed to blow with sufficient consistency to allow any racing. But the forecast breezes for the closing three days appear good.

For most of the competitors who flocked to the YOG regional qualifiers in Cabarete, Dominican Republic, Dakhla, Morocco, and Pranburi, Thailand, the TT:R Slalom discipline was their first taste of racing.

The vast majority of the athletes come from a freestyle kiting background -some like Christian Tio (PHI) and Adeuri Corniel (DOM) at the highest levels- and were surprised by the thrill of competing in races.

Part of the draw is that the equipment they must use, four registered series production inflatable “tube” kites, and one production twin-tip board, is familiar to every kiteboarder over the world.

The high-octane downwind TT:R slalom/boardercross format races that are run in as little as 10kts breeze was developed to optimise the performance of the “tube” kites and twin-tip boards, with the added drama and spectacle of obstacles to be jumped to showcase kiteboarding’s unique qualities.

The 10-strong Italian team’s coach, Simone Vannucci, has seen a sea-change in the young kiteboarders who have been under his guidance for more than a year.

“I absolutely believe this style of racing is a pathway to high-end kite hydrofoil racing,” said Vannucci. “I’ve seen the proof with my own kids. Some are already looking to the next step, and some have hydrofoils.”

For Vannucci, the key to the format’s success in attracting so many young competitors was the choice of equipment that was easy to use, accessible, affordable and familiar.

“I think the winning aspect of this class was selecting the equipment that was totally familiar to the kids,” he said. “It was the only way to get them out from the beach and teach them some sailing and to get them on to kitefoiling. It was guaranteed this was the best way to do it."

“In doing so we taught them competitiveness. I see in their eyes the desire to compete. Once they catch the bug they’re hooked. My point is that if we want to create new kite hydrofoil sailors, the only way is to look for them in kiting because it requires such good kite handling skills.”

Connor Bainbridge, the British team’s coach, was skeptical at first that TT:R would act as a springboard. But the top kitefoil racer, with long experience in windsurfing and sailing, has been converted by what he has seen.

“I wasn’t a believer before, but what I’ve seen here and over the last year convinced me it’s a great pathway to high performance racing,” he said. “The simple equipment and accessibility make it ideal.”