Dominicans Dominate in Intense Battles at Youth Worlds in China 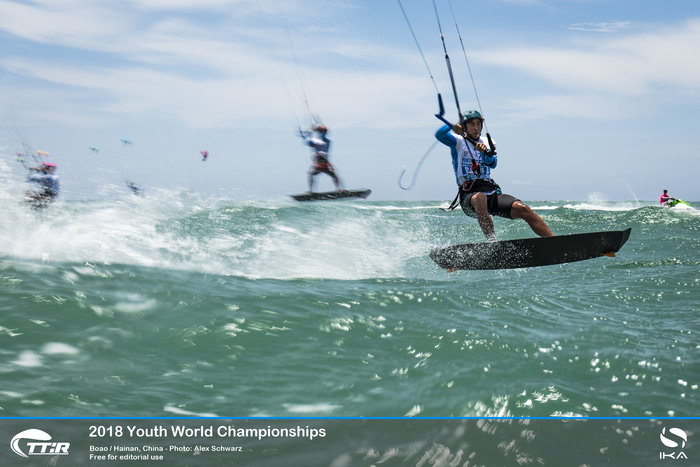 Young kiteboard racers from the Dominican Republic charged to the top of the leaderboard after a long day of close-fought racing at the TwinTip: Racing (TT:R) World Championships being staged on the tropical Chinese island of Hainan.

Freestyle star Adeuri Corniel (DOM) grabbed the top spot with a dominant performance on the penultimate day of the competition, seizing three wins from three in the crucial elimination round deciders.

The exuberant young competitor easily cast aside his poor start in the opening races after two windless days at the beginning of the competition, which will also serve as a qualifier for the upcoming Youth Olympic Games (YOG) in Argentina in October.

Countryman Lorenzo Calcano held the third spot after similarly consistent showing in breezes that stiffened to 25kts, providing for thrilling battles in the high-octane format specially designed for the youth games where kiteboarding’s first Olympic medals will be awarded.

Only local favourite China’s Haoran Zhang -like the rest of his team flying a distinctive kite made up of his national flag- was able to split the pair with a series of gritty and sparklingly quick races that saw him take a second and third spot in the day’s elimination finals.

In the equally hard-fought girls’ division, which makes up almost 40 percent of the 62-strong fleet of athletes born between 2000 and 2003, Spain’s Nina Font Castells built on her overnight lead with two elimination round victories from three.

The 2017 European TT:R Youth World title holder was a model of consistency, though she slipped up in the first elimination round on day four of the championship when she failed to make the final, an error she was able to rectify with a discard.

But the defending International Kiteboarding Association (IKA) TT:R Youth World Champion, Italy’s Sofia Tomasoni, also clawed her way back into contention to sit second on the leaderboard, equal on points but ahead in the standings of China’s Kewen Li.

Tomasoni’s day began badly when she failed to make the opening elimination decider. She sank down in the sand after coming back to the beach, overcome with emotion. But she regrouped and with the help of her strong Italian team, which has four girls in the top ten, she posted two strong finishes.

Team-mate Alice Ruggiu sits in fourth spot on the leaderboard after a mixed day’s outing. But a second place in one elimination decider was enough to keep her nose in front of the strong French athlete Poema Newland who posted consistently high-placed finishes after a poor opening foray.

Ruggiu was clearly elated with her performance and revelling in the competition in the strong breezes, flying her smallest kites. “In the first elimination I got a second. Now I’m strong because I like to go fast and I like these conditions.”

If the opening day of racing was marked by a rash disqualifications among the girls’ fleet for crossing the start-line early, the second was characterised by tangles at the marks or the spectacular jumps as the wind accelerated. 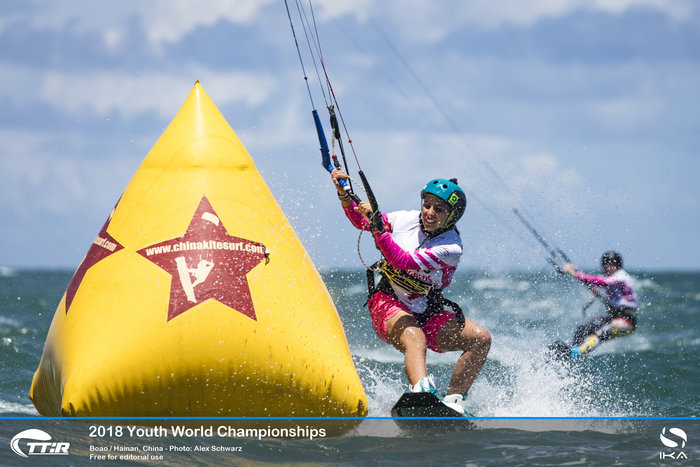 The tangles were a measure of the mounting pressure on the athletes and the tightness of the racing as the girls sped around the marks with metres of one another, unwilling to give any quarter.

In the boys’ division Corniel faced no such problems, able to keep clear of other competitors with his sheer, raw pace that invariably gave him the lead rounding the crucial first mark, affording rivals little chance to pass him.

“From the start boat to the first mark I get ahead because my speed is good,” he said. “If someone’s close behind me I can find a bit more speed to keep clear and avoid tangles. I love this and I really want to represent my country. The mental thing in this is really tough. You really have to use your head, way more than in freestyle. It’s great.”

Full results, all elimination series results, and live scoring will be available at www.twintipracing.com