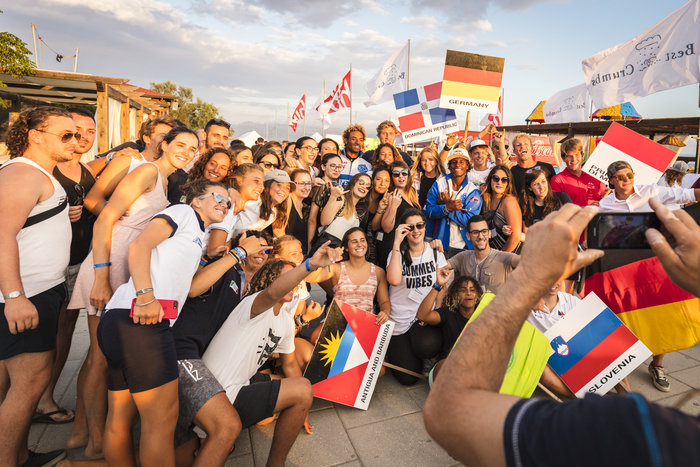 The strong field of 59 racers from 19 countries, including the two-time world title holder, Germany’s Florian Gruber, will go head-to-head in the frenetic TT:R slalom-boardercross discipline over five upcoming days of competition at Gizzeria, Calabria.

With the Youth Olympic Games (YOG) on the horizon, where kiteboard racing makes its inaugural appearance, the International Kiteboarding Association (IKA) also included a Pump Kite division to give qualifiers a last chance to practice against the strongest athletes.

But after a colourful opening ceremony with traditional Calabrian dancing all eyes will be on the race for the “open” men’s and women’s TT:R World Championship titles where the top racers will share a €10,000 purse in the increasingly-popular downwind discipline of enthralling short, but intense, contests.

The 17 men and 14 women fighting for the world titles are allowed to use any twin-tip board and and any combination of kites, though the most experienced racers will no doubt select foil kites as their weapon of choice.

In the men’s division, Germany’s Gruber, a racing veteran at the age of 24, must be considered a strong contender to take his hat-trick of titles over the course of the five downwind legs in the races that finish in a little over three minutes.

Yet he will undoubtedly be pushed hard by Croatia’s Martin Dolenc, who scooped the “open” TT:R European crown at Hang Loose Beach a year ago in an imperious display. It is, however, a performance he has been unable to replicate in the intervening months since.

Still, Dolenc is one of 24 boys and girls born between 2000 and 2003 who have qualified for YOG in October in Buenos Aires, Argentina, after doing enough at the TT:R Youth Worlds in China in May.

Many of the other YOG-qualified boys have opted to take the opportunity for practice in the “open”, unlimited-age Pump Kite division, where they will be restricted to the equipment that must be used in the games—one twin-tip and four “tube” kites.

In all, 22 boys and six women from have chosen to enter the fray for the Pump Kite Trophy with its purse of €5,000. Among the favourites must be the Dominican Republic duo, newly-crowned TT:R World title holder, Adeuri Corniel, and countryman Lorenzo Calcano.
But the competition will be fierce with Tiger Tyson (ANT), Cameron Maramenides (USA), the French pair of Victor Bachichet, the reigning European TT:R Youth champion, and countryman Benoit Gomez, all in the mix.

The coming days of hard-fought competition are bound to be absorbing with so much at stake—yet another fitting kite racing chapter in Hang Loose Beach’s story that now boasts its seventh successive year of major international competition.
Top