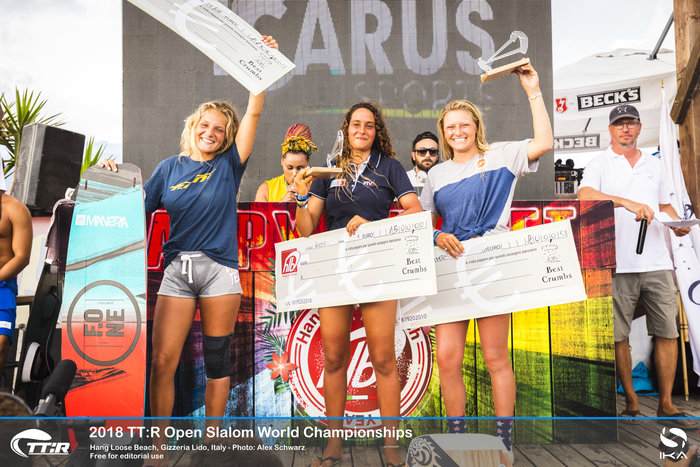 The TwinTip: Racing (TT:R) World Championships went down to the wire with local girl Italy’s Sofia Tomasoni seizing the title in a nerve-jangling final race at the end of five days of thrilling kiteboard slalom-boardercross action.
Tomasoni had been playing catch-up after a faltering start, only managing to capture and hold the leaderboard’s top spot on the last day at Gizzeria’s Hang Loose Beach track, picking up her first senior championship crown to add to her previous TT:R Youth Worlds title.
“I’m really stoked because I so much wanted this second title,” said a visibly relieved and elated Tomasoni. “This is where I learned to kite. This is where my family are. It’s fantastic to get it here. I had problems on the first two days. That was heavy for me. But I managed to change my mindset, so it’s great.” 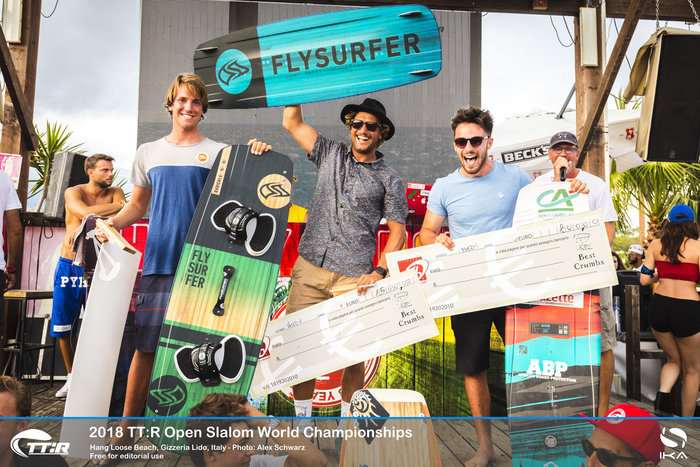 Germany’s Florian Gruber was similarly thrilled to claim the crown in the men’s TT:R Worlds division, his third successive title. But his task had proved easier and his assured performances in the high-octane TT:R discipline ensured he dominated and could have sat out the final day and still won.
“It might have seemed easy, but it’s always hard,” said Gruber. “I had pretty clean racing most of the time and I didn’t make too many mistakes, so I was pretty relaxed. But for sure all the younger kids have got a lot better in the last year because they’ve been training for the Youth Olympic Games [YOG]. So, I really enjoyed it."
One of kiteboarding’s most exciting prospects, who Gruber did not have to face, is the Dominican Republic’s Adeury Corniel. He chose to compete in the TT:R Pump Kite Trophy being run in tandem on the equipment that will be used at October’s YOG in Argentina, where kiteboarding makes its Olympic debut. 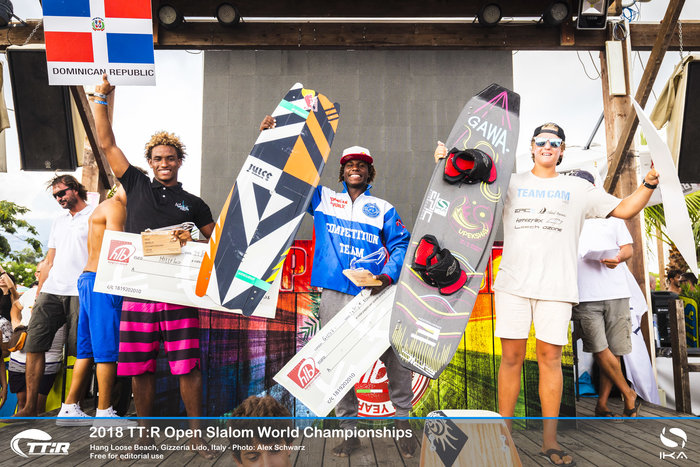 Corniel, the reigning TT:R Youth Worlds title holder, led the men’s Pump Kite division from start to finish and rarely put a foot wrong, winning almost every one of his races and all the vital elimination round deciders.
“It feels amazing,” said Corniel. “This game is about concentration and focus, that’s the most important thing. I’m super-happy. It’s not easy to keep winning every race. I’ve been training really hard, but so has everyone else and they could all win. The level’s so high now.”
The women’s Pump Kite Trophy was won by Poland’s Oliwia Hlobuczek, who got the better of Russia’s Anna Fedorova and Brazil’s Maria Beatriz Dos Santos Silva in hard-fought racing in moderate breezes that ranged from 10kts to 16kts, occasionally hampered by unseasonal thundershowers.

But the spectacularly-quick TT:R downwind slalom format, specially-developed for the YOG in Buenos Aires, has proved particularly popular. Fifty-nine young athletes from 19 countries and five continents—women making up 40 percent of the field—made the trip to Gizzeria to fight for glory.
It was in the women’s “open” TT:R Worlds—contested on any kite and any twin-tip board—that the competition was fiercest, with any of the top 10 competitors capable of lifting the crown and a share of the €10,000 prize money.
Perhaps the biggest loser was overnight leader, Germany’s Alina Kornelli. She showed just how difficult it can be to win despite two good days in the middle of the regatta. Her points’ lead ebbed away on the last day thanks of two disqualifications for tangles that kept her out of the elimination round deciders and put her down to fifth overall.

By contrast, early leader, France’s Poema Newland, had lost ground as the competition progressed after a series of uneven outings. But she regrouped and did enough on the final, tense day of racing to take the second podium spot, leapfrogging the US’s double Formula Kite hydrofoil champion Daniela Moroz, who took third.
“It was so hard because it was so up and down in the women’s division,” said Newland. “I was fourth overall earlier on the last day and I really didn’t want to finish there again. I always seem to finish fourth. So, I really pleased.”

Re: Nail-Biting Finale at TT:R Worlds as Kiteboarding Champions Crowned in Italy