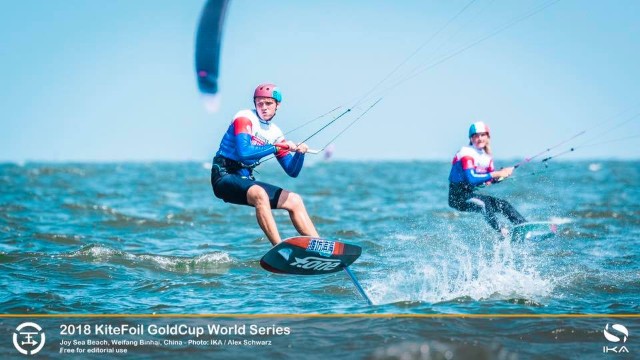 
British racer Connor Bainbridge opened his account at the KiteFoil World Series in style, with a trio of wins that gave him the leaderboard’s top spot at the season-opening event being played out in Weifang Binhai, eastern China.
The veteran sailor and windsurfer also bagged several high-placed finishes against a field stacked with the world’s fastest kitefoil racers, giving him a healthy points lead on the first of the five-day competition.
Bainbridge was even able to shrug off the misfortune of catching some debris on his foil and crashing, putting his kite in the water and eventually finishing down the order in the third of day’s six races.

But with the likes of Monaco’s Maxime Nocher snapping at his heels on the windward-leeward course and on the leaderboard, Bainbridge is experienced enough to know he can take nothing for granted and all is still to place for.
Multiple world champion Nocher, who suffered his own misfortunes on the course in breezes of 14kts to 16kts under clear skies, is clearly coming back to form after a dip over the past year.
All the 32 athletes from 16 countries who have travelled to compete in the first act of the International Kiteboarding Association (IKA) KiteFoil World Series revelled in the glorious conditions, with steady breezes blowing over the Yellow Sea’s flat waters.

The Weifang event—the first of four scheduled to crown the KiteFoil World Champion—has a total prize money package of €60,000, by some margin the richest in kiteboarding. It has drawn all the leading kitefoil athletes.
The series’ similarly wealthy second act a few days after completion of the Weifang tour stop will see the racers head to Fujian province’s windy Pingtan island, marking back-to-back events in China and signalling the country’s deep resources and vaulting kiting ambition.
In the women’s group, racing among the men, three-times Formula Kite World Champion, Daniela Moroz, held her own against the strong fleet. She sits sixteenth overall, just ahead of rival, Russia’s Elena Kalinina.

But it was among the leading men that there were the biggest upsets, with two-time Formula Kite World Champion Nico Parlier (FRA) apparently having difficulty finding his groove, sitting fifth on the leaderboard despite a win in the day’s third race.
Fellow countryman Théo de Ramecourt had a good outing, posting a clutch of high placed finishes that took him to third spot overall, just above the young Slovenian, Toni Vodisek, who regrouped from a slightly poor start and bagged several third and fourth places.
Yet it was Bainbridge who exploded out of the blocks after a number of strong showings this year at IKA Formula Kite “short track” events. Bainbridge believes longer windward-leeward courses play to his strengths because of his fleet racing experience.

“For me this style of racing makes a nice change from ‘short track’, which is more like a ‘drag race’,” said Bainbridge. “This is much more tactical, more involved, which I think plays into my hands. It's fun. But it’s an insanely good field when you’re on the start line, so I’m really happy to be in this position.”
Nocher was similarly pleased to find himself back in the hunt for glory after a spell of mixed performances over the past year.
“I messed up two races, the second and third of the day, but I’m happy with my speed,” said Nocher. “But in the others I made some good starts and I had perfect angles, so it feels good to come back. I’ve been training hard, so it’s paid off and I’m quite happy.”