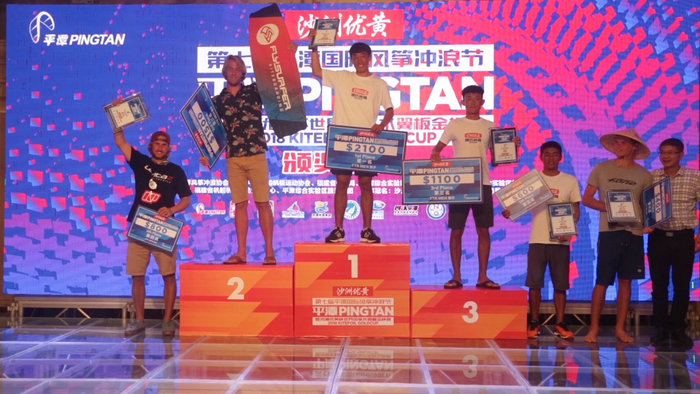 China’s growing strength and depth in kiteboarding talent was amply demonstrated when two of its young athletes saw off both the TwinTip:Racing (TT:R) Slalom World and European title holders to take the podium’s top two steps at the national championships in Pingtan. Haoran Zhang and Jiangang Wu claimed first and second spots respectively in TT:R course racing discipline, holding off Croatia’s Martin Dolenc and Germany’s Florian Gruber over the three days of competition in challenging conditions.

The women’s title at the event, part of the 2018 Pingtan International Kitesurfing Festival that also hosted the International Kiteboarding Association (IKA) KiteFoil World Series’ second tour stop, was won by China’s Jingle Chen. Zhang, Chen and Dolenc, all under 19 years, will head to Argentina next month to compete in kiteboarding’s Youth Olympic Games (YOG) debut in Buenos Aires, battling in the TT:R Slalom discipline.

Such is the rising level of interest in kiteboarding in China, 70 athletes were among those who travelled from all over the vast country to compete among the sprinkling of international racers who were also taking part in the elite-level KiteFoil series. Over eight races, fought out in mounting breezes the hit more than 26kts, the racers competed over one gruelling lap of the course just off Fujian province’s Pingtan Island.

Zhang showed why he managed to land the boys’ YOG qualification spot for China on Hainan’s Bo’ao at the TT:R Youth Worlds, seizing six wins from eight in the competition’s demanding conditions. Fellow countryman Wu was a worthy adversary, taking the second podium spot with a win and four seconds that enough to put him above European TT:R Slalom champion, Dolenc, and TT:R Slalom World title holder, Gruber.

Amassing how small Country like Croatia (with 50 kiters max), is in top 3!