The International Kiteboarding takes place once again in Italy. From October, 16th to 22th, 2016, Porto Pollo, an authentic Kiteboarding paradise in the district of Palau, Sardinia, will host the Grand Slam, final leg of the World Kite League 2016, organized by GLEsport under the aegis of IKA (International Kiteboarding Association) and with the contribution of Regione Autonoma della Sardegna together with the Department of Tourism and the Municipality of Palau.

The Sardinia Grand Slam will be the final act of an international championship that has previously brought the best kiteboarders of the world to El Gouna (Round 1, Egypt, March, 20th-27th 2016) and Leucate (Round 2, France, April, 15th-22th, 2016). In September, 20th to 25th, the Round 3 of the World Kite League will be run, scheduled in Pingtan (China), as last act before the Sardinian Porto Pollo final.

Registrations open officially on September 15th 2016 and the organization expects the participation of more than 70 athletes from 20 nations. The Sardinia Grand Slam is open to Freestyle and Big Air categories, both Men and Women, and offers a total money prize of 50,000 Euros. Great expectations obviously for big international riders like the Brazilian Carlos Mario, currently first in the world ranking, the Dutchman Youri Zoon, and Spaniard Alex Pastor. 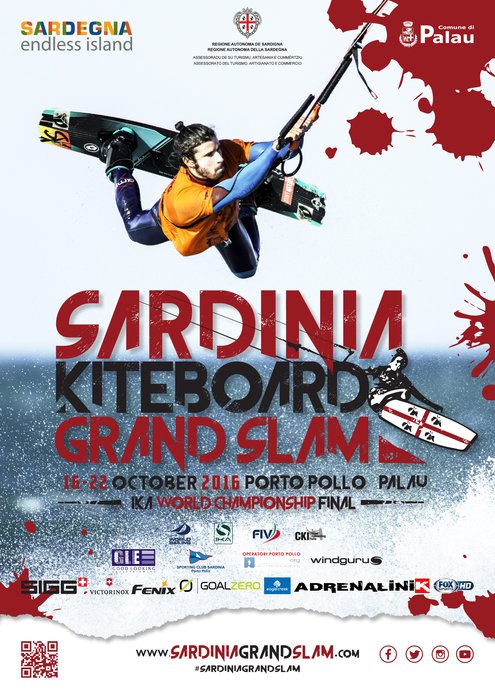