Customer feed back from Canada

Customer feed back from Canada

As I mentioned in a mail sent to you on Friday, the boards were landing that same night. However, we will not be able to clear the board until the end of our long weekend, as Canada Customs is closed for this holiday. We will be getting the boards on Wednesday morning, and we will let you know.

Hopefully you will be able to have the foils shipped to us soon, so that we can provide positive feedback on the forums, help your sales, and stick our middle finger to those guys who have been scorching you on the forums.

Keep up with the good work!

manual carabello, alias ......
Who is this Canadian customer as you posted this quote?
R H
Top

Sorry for you.... Carafino is know for being a liar and a crook, each time he make a scam he is threating everyone and everyone are afraid of this poor guy.

Taaroa was importing in E.U carafino products... most of them have broke and carafino has gone with more than 10 000 €. Severals shops, manufacturers and customers have the same problem with him.

We can easily suppose that the amount of the scam is now very important.

The manufacturer's board of Carafino has try some months ago to alarm everyone that he is crook and Carafino has call every hour to threat him...

Now it's your turn

Because everyone are afraid nobody know the truth.

Many professionels, manufacturer and customers has been threatened by Carafino. Every 4 years he is making a new scam to take money.

Because he is living so far in Bali he is not risking legal proceedings unless all people are making a procedure in common....

M Carafino previously said in a message that he is choosing his customers and more or less that he can refuse to sell to whoever he wants.
I guess (not sure) you can choose the retailers (Carafino is an american company and depends upon the american laws) but not sure that you are allowed to refuse to sell to the final customer (under the american laws too) . Does someone has the knowledge about that ?

I might be wrong but I am curious about that.
Top

A group of my friends here in Canada have purchased several Carafino foilboards. A package of boards from Carafino has arrived here at the airport and they plan to pick it up tomorrow. I will post a picture when I see the boards. The hydrofoils are apparently not included. One of my friends did write the email above (but did not really intend it to be publicly posted.)

I am not involved in this purchase. I did however buy a foilboard from Carafino in 2008 and had fun on it for several years.

Truc wrote:M Carafino previously said in a message that he is choosing his customers and more or less that he can refuse to sell to whoever he wants.
I guess (not sure) you can choose the retailers (Carafino is an american company and depends upon the american laws) but not sure that you are allowed to refuse to sell to the final customer (under the american laws too) . Does someone has the knowledge about that ?

I might be wrong but I am curious about that.

Sure you can refuse to do business with anyone provided you are not discriminating against their faith, color, sex, sexual orientation or any other minority or group of people the media tends to support and/or do not support but talk about in a positive or negative manner. So yes if you dislike a person just because you dislike them you can choose not to provide them with your product. Unless they are ne of the above.
Top

Laughingman wrote:Sure you can refuse to do business with anyone

Buying an item is a purchase or doing a business?
In my mind a buying is a buying, not making a business and it works simple:
a client enter a surfing shop, checks a required board, considers a price, if happy picks it up, walks to a cashier, pulls a wallet out of his pocket, puts a cash or pays by a credit card and ...
...hears from a seller: sorry sir but I don't like your hairstyle, cannot sell it to you and F off from my shop because these boards are reserved only for a guys with a bold head

I believe its called breach of contract and in addition to the other money they owe me they should be reimbursing my flight costs travelling to collect form the Royal Hong Kong Yacht Club. 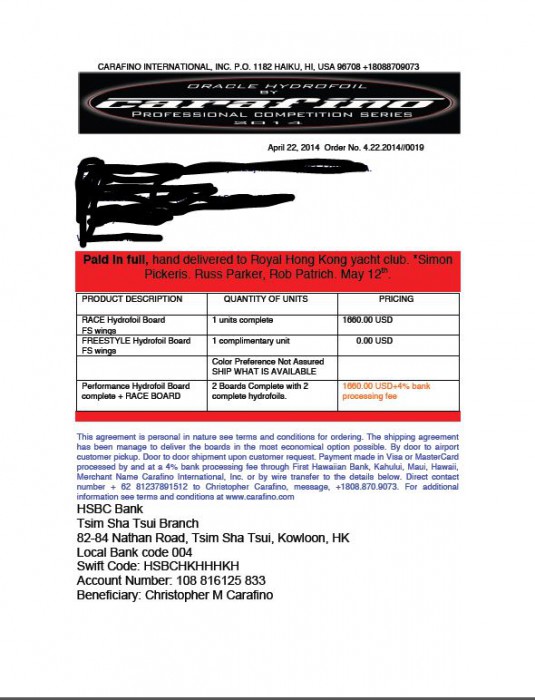 When he failed to deliver he started claiming to the Olympic Sailing Committee I had sued the Royal Hong Kong Yacht Club a whopping lie of such demonstrable epic proportions (a very good friend from 6 Sydney-Hobart races I have done works there and they immediately confirmed that was total/utter bollox) it immediately confirmed to all concerned that Carafino wouldn't know the truth if it bit him in the arse.

This is what the people he claims to have contacted in Zhuhai and Australia. Its possible he may have spoken to the cleaner and got them to say what he wanted them to say and asked if he could quote them on that but these are the guys who run the show at the best hydro foil production facility in the world had to say.