Thanks for all the great feedback! Based on the suggestions offered so far I've made a few changes to the design.

- Wing area is increased from ~450 cm2 to 650 cm2. Chord reduced from 12 mm to 8 mm to account for carbon thickness.
- Dihedral changed from full wing length to flat center section with only tips angled. Total drop is the same, so angle is greater out at the tips.

- Fuselage is shortened to ~600 mm and shown made from a stock carbon square tube.
http://www.rockwestcomposites.com/products/25487h-48

- Distance from front wing TE to strut LE reduced from 100 mm to 0 mm. I did this for structural reasons to reduce the bending loads in the fuselage. This is my first go at this so I want to reduce my odd of structural failure.

With the flat sides, the square tube is easier to work with and interface. I'm thinking of either printing or fabricating a plug (highlighted orange) that can be inserted and epoxied into the tube. 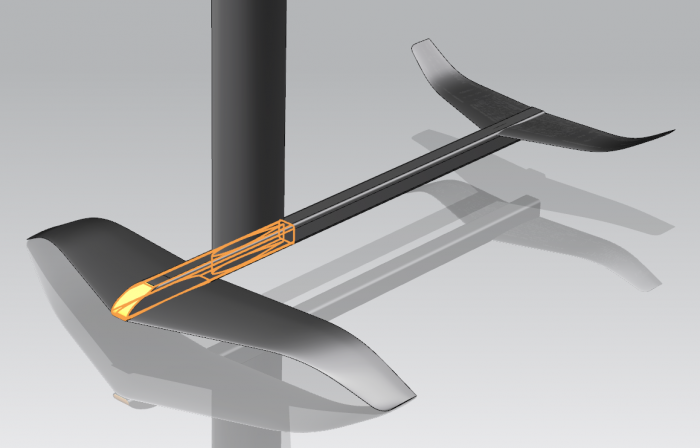 The plug would have cross drilled holes to allow for barrel nuts to be used as inserts for the wings in a completely blind hole. It would also have the female shape to accept the strut. The whole strut/fuselage assembly would be epoxied and then reinforced with a few layers of carbon.

So I have a few questions:
Regarding Dihedral- My newb intuition tells me that since the angled tips have their lateral center of pressure further aft from the vertical center of pressure of the wing, this should provide better yaw 'stability.' Not sure. Can anyone comment on the merits, or lack thereof, for different dihedral geometries? Low aspect free ride wings seem to be more constant radius where the racier wings have a flat section in the center. The constant radius also has structural merits because it l can act like an arch but I can see how this would be less efficient because you have more parasitic drag for a given amount of projected area.

Regarding front wing placement relative to strut- I've seen everything from wings mounted under the strut to wing sticking way out in front of the strut. How does this relationship affect the behavior of the rig?

Thanks again for all the suggestions!

Need to work the empenage fairing/aft wing joint and board connection next!
Top

That looks like a winning design, keep us posted on your progress.
Top

Why do you want a shorter fuselage ?

For gliders, the longer the better almost, as you get much more stability, and a "better one" so to speak, that responds so much better, with longer fuselages thus smaller thus way less drag stabilizers, so a win win except at one point where you get a structural and practical difficulty yes.

Hello compo pete,
how is your build coming up?
do you have pictures to share or video?
Pedro
Top

Could you give the 3D files of your kitefoil please ? I'd like to get started on a DIY kitefoil and I think it is great to start !