Slyde wrote:Hi Mike, Glenn here, that was me on the spotz. You should try it sometime and then you'll see it's all trade offs. I agree with what has been said but Peter is incorrect about needing way more power for the speed wings. They generate so much speed that they need smaller kites, that why I was on a 7 and you were on an 8. Sure, the racers will hold onto as much rag as they can.
fwiw you looked pretty stable to me. I was working hard for that speed and the trade off is I'm still crap at the corners after a year whereas with a slower lower aspect foil I might have progressed that a bit faster.

I have never said yoiu need bigger kites for faster wings, as because of the speed they can ride with the same kite indeed.
But if you want to go the same angle upwind, with a small wing, compared to a bigger one, you need a bigger kite for the small wings, not in doubt at all

VMG is another issue, and not quite as easy to determine, as you go a little lower but with more speed, for max VMG - but you still need a bigger kite than needed for the bigger wings IMO, to max the numbers

Sorry Dude, simply not true. Slower wings dont need the little power spike to get going that faster wings do, but otherwise the faster you go the smaller the kite you need. Upwind and VMG are essentially the same thing from a practical point of view. Anyway I'd rather ride than talk about it so I'm out.

I am a newbie but with that said I find the kite power, the position of kite in the wind window and weight on my feet to have a big impact on my foil performance regardless of my foil speed and water conditions (white water). Trying to take advantage of all of these variables is so much fun.

I have a foil friend that ordered a new MHL wing to replace his older fairly worn freeride wing and is going medieval on his old one to try and get faster performance. Interested to see the results.
Top

Sorry Dude, simply not true. Slower wings dont need the little power spike to get going that faster wings do, but otherwise the faster you go the smaller the kite you need. Upwind and VMG are essentially the same thing from a practical point of view. Anyway I'd rather ride than talk about it so I'm out.

Aaah, c'mon, are we talking about the same here ???

That is NOT the case, I can assure you - particulary the upwind angle will suffer with the smaller wing, in light wind, and need a bigger kite to compensate or max

There must be loads of racers out there who can confirm or not ?

I am very sure, that a bigger (= slower) similar wing will perform better with smaller kites and/or in lighter wind, and not the other way around

In my racing experience we always felt that a bigger wing gives a better upwind angle (and VMG). You cannot match this with a smaller wing & bigger kite combination.

But there is a size limit where the wing is so large that it's drag outweighs the benefits of its lift.

And of course a bigger wing has more drag so on the downwind race leg you will go slower and then may not win the overall race.

How did I get myself sucked into this discussion. Peter both of those Sword wings are fast wings. Now I'm definitely out.
BTW Mike the offer still stands to try the Spotz for comparison.
Top

I will jump in this with my limited experience , I have the 2014 MHL freeride ( actually have had 3), in my experience it does not need the rear wing trimmed ( Angle of attack changed), I have shimmed the rear wing a bunch of different ways and find the original setting to be best, however it does seem sensitive to foot position, since I ride strapless I can make minor adjustments while riding for various conditions and find I have different foot positions for riding hard upwind compared to off the wind, I have ridden with a friend who has the 2014 race wing, he seems to do just as well in light conditions.
I have since bought the 2015 freeride wings and made a new fuselage, angle of attack of both wings is the same on this fuse as the original fuse, the 2015 wings are much lighter and have a thinner profile, they are * perhaps * a bit more stable at speed and gliding through turns, I notice this mostly when riding toeside, It feels to me like the newer wings need a tad more speed to get foiling, also the new fuselage I made is much more hydrodynamic than the original MHL so that may have some effect on what I feel.
The picture shows the difference between the original 2014 lift and my new fuse with 2015 wings (2014 mhl on the right) 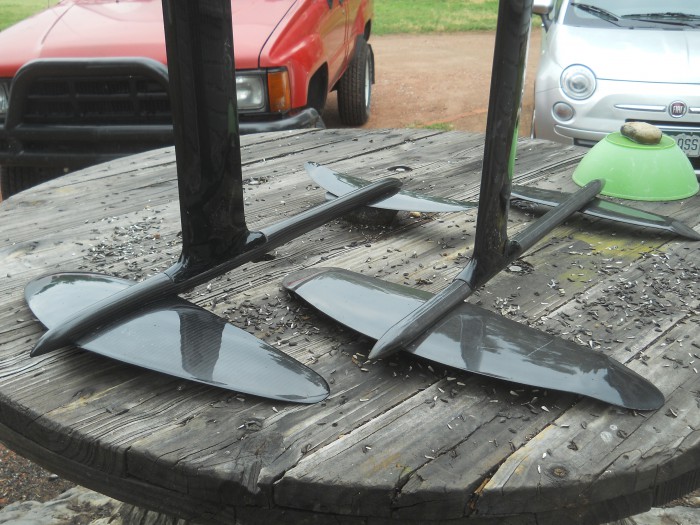 On the other hand, I have done repairs on several MHL lifts and shortened the mast on two of them, I am not at all impressed with the quality of construction, inconsistencies in the fit of the parts and their advertising which leads you to believe these are carbon foils, they are actually fiberglass wings with a cosmetic layer of carbon and the fuse and mast are divinycell cores with carbon skins, I have found huge air pockets in the layup especially at the mast to base plate connection which is one of the most highly stressed areas on a foil. That being said they work just fine.

hope that is of some help, just my observations.
Top

What's up with those sharp fuselage noses? All submarines use bulbous noses. All tankers too. That is counter intuitive but common wisdom nowadays. And perhaps wings leading edge could be less sharp as well?
Top

tegirinenashi wrote:What's up with those sharp fuselage noses? All submarines use bulbous noses. All tankers too. That is counter intuitive but common wisdom nowadays. And perhaps wings leading edge could be less sharp as well?

that seems to be the trend in the industry right now, the first 3 foils I built had blunt leading edges on everything for safety while learning, while they work fine they are slower and had more of a tendency to be noisy and had ventilation issues, after reworking the profiles and sharpening the leading edges my DIY foil is silent , faster and no ventilation problems, 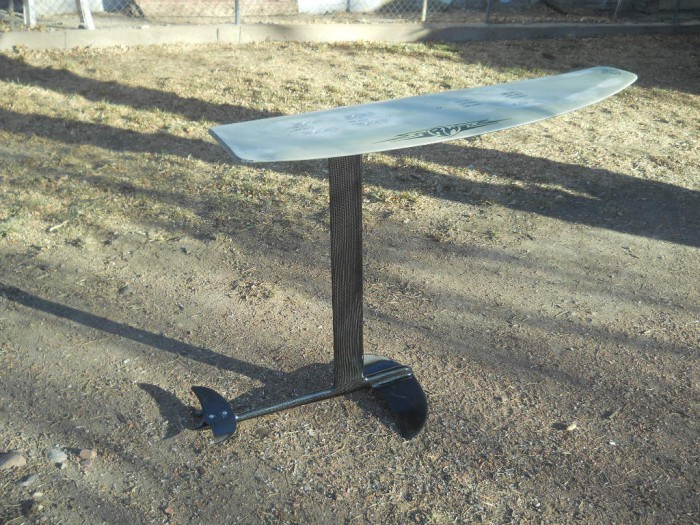 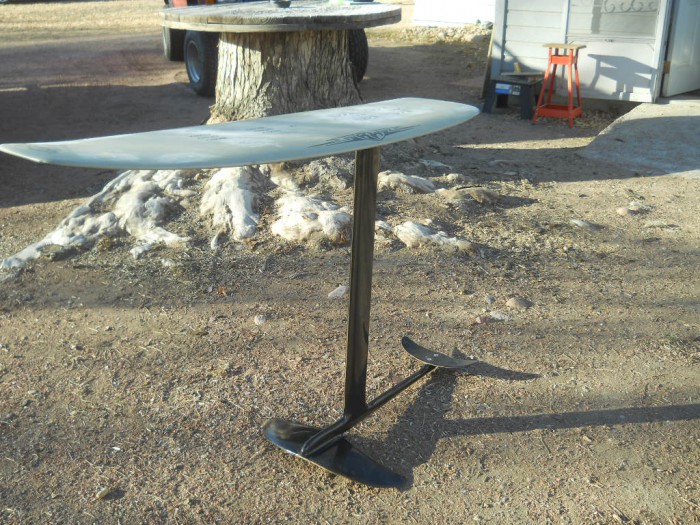