Thanks, glad to hear you enjoy the videos.
Here`s a new video:
Trying out some "drifting "(sideways sliding on the foil)
The Stabless foil makes it easier to slide sideways, lots of fun

Øyvind wrote: ↑
Tue Nov 20, 2018 4:28 am
Trying out some "drifting "(sideways sliding on the foil)
The Stabless foil makes it easier to slide sideways, lots of fun

2 years ago in post 9 it was presaged, that once there will come an experienced, able to drift a foil.

Very nice one,
also tried drifting more the last month and felt it is not to hard, if respecting some aspects, but doupt that I can already do it so nice as you. Here is how it basicly works:
You need: Well powered kite, flat water and a big wing with not too much anhedral.
I think the 1200 cm² of Ketos Øyvind uses should be pretty good, remebered the 990 cm² instead, due to anhedral, felt worse than my 680 cm².
Ride in switch stance to create the momentum, ride slow, get slowly higher with a kite at 11/13 and wait until it starts to drift by itself when enough area of the strut is out of the water and does no more block the drift. Then try to stabilize situation with power and depower and kite position to keep speed and enough forward pull.


Also bought a new monofoil with the big surf (70 cm) and SUP (80 cm) wings from GONG and liked it, as very easy to ride as monofoil. While the 70 cm with stabi felt already nearly to big for wave and kite. Even the 80 cm felt still very nice in the mono setup, but the foot position traveled back by about 15 cm when I dismounted the stabi, which shows how much the stabi disturbs, blocks and breaks the system. First simple video with the 80 cm wing and a 3 m² Peak4 single skin already shown in the foil kite section:

Hi Horst,
Which of the Gong wings would you recomend for a mono-beginer?
Thanks!
Top

I already have the same kite size. I just miss the skills

@ap888:
No not yet, but more and more people ask me, while finding out is so easy, just forget to mount your stab. But I have no doupts a 1200 cm² Wing especially with the shape of the Onda has to be easy, look at the video from Øyvind what is possible, would espect the ketos and moses 1200 cm² mono are on a similar level for mono.

@jaros:
At Gong actually I would definetly go with the 70 cm span "size M (1257cm2 projected area, 1450cm2 developped)" surf wing:
https://gongsupshop.com/epages/box1707. ... LLSURFCPTM
But actually I would recomend it with an additional 90 cm strut, which I haven't tried yet, but shouldn't be to soft for that, tested it with the 80 cm which was also ok.
The 80 cm SUP wing, can be ridden as kite monofoil, but is not necessary or close to to big, starting in combination with a pocket board has been more difficult with the 80 cm wing.
The surf 65 wing is in my eyes just to soft at least for normal stabi foiling, but still have to test it as mono, but than for sure will cut the tips to make it smaller and stiffer, but so not sure if good for monofoil beginners.
And pay Attention, the SUP 80 cm and Surf 70 cm wing conection to fuselage is longer and is in both direction not compatible to the both kite (65 and 60 cm) wings, why I build a fuselage cutted in three parts to make every combination and also monofoiling possible. Not finished yet, final goal is to have 1000 different combinations, calculated without the possiblity to additionally shim the stabi and strut. Actually I am at around 100 foils as I am also able to move the mast in steps Forward above the wing. … But as you can expect, it will take a bit to test all possibilities to find the best. 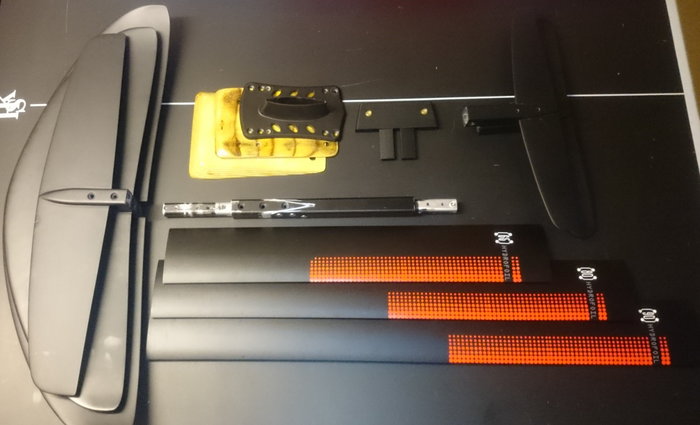 But also know, I am not sure how the 70 cm will be for jumping and how it will survive it, as to much span and therefore load and also a bit to slow for fun with jumping.
So for jumping best beginner choice is still the 990 cm² Levitaz Cruizer in combination with one of the newer full carbon struts from 2018. Or maybe the named wings from moses or ketos, where I don't know the stability for jumping and also would have a bit of a doupt, when jumping and landing hard.

@Regis:
Thanks for the link, just great, every new video.

If the above is true, the need for back foot preassure at acceleration should be lower for bigger foils.

Horst, you have the most experience in that matter?
Does that happen in reality?
Have you ridden a foil too big in your opinion? Why it was too big?
Do you depress speed during your ride on smaller foils. If yes, how do you do that?

You recommend just forget to attach the stab.

I understand that the stab provides the force opposite the one one created by the front wing.. (ie: front wing pushes up and stab pushes down). So both screws attaching the fuselage are probably almost equally loaded? but when you remove the stab, the lift increases and so the front screw now handles all the twisting pressure coming from the front wing and back insert experiences the screw being pulled out of the insert? Basically, what I am asking is: Will the imbalance created by removing the back stab on a from wing like Onda ruin the inserts and damage the mast eventually?

Onda Wing sits quite far forward from the mast. Unlike the front wings you guys ride. The leverage is therefore much larger to pull the inserts out. .

Horst Sergio wrote: ↑
Wed Dec 19, 2018 10:57 pm
@ap888:
No not yet, but more and more people ask me, while finding out is so easy, just forget to mount your stab. But I have no doupts a 1200 cm² Wing especially with the shape of the Onda has to be easy, look at the video from Øyvind what is possible, would espect the ketos and moses 1200 cm² mono are on a similar level for mono.

I racon no one knows for sure. But, to be on the safe side I would look for 8mm bolts and inserts.

I hear you about 4 bolts, but if one has an off-the shelve foil, you don't have that choice to have 4 screws.
So we either take the risk of ruining the mast or wait till monofoil specific mast/fuse comes out..

Or use cheap aluminum gear for mono-foil, where you don't care if something breaks.
But that means, buy extra set of gear just for this purpose. So taking out the stab, is very appealing.. (require no new purchase), but maybe leading to costly repairs or damage in the future.