The stabless normal profiled wing will be the lowest drag and most efficient, IF the rider can control it sufficiently for max performance that is.

Meaning, as a comparison, just like if you had a kite without much or any bar/rear line feedback you would over and undersheet it very subtle without knowing (feeling), thus it will not perform as good in reality eventhough it might be the best in theory.

This could go for hydrofoils too, or not, time will tell.
As we stand so high, thus change AOA very slowly because of this lever, I think one can indeed control it, but difficult to say.

A reflex wing will never be as efficent as a normal wing with a stab when lifting, as this design is a compromise, eventhough they work quite okay at higher speeds indeed.

But as both Denise and others know, it will work quite well for "freeflight or freeride" and lively.

Also, the lower drag and ease of not having a fuselage and stab, might outweigh so it goes even up, and MUCH simpler with only a frontwing and short fuselage

I did get out yesterday in very light wind, flew 9m airush ultra and FS peak 4 8m.
Peter you are right about eficiency , the reflex wing is a little bit slower, (just can notice) than the non relex wing but I can go faster overall on the reflex due to increased pitch stability which is very noticeable, the trade off is worth it. All monowing should have reflex, and curved trailing edge ( tips behind root) in my opinion.
Unfortunately the wind died before I could test Levitaz. ( Maybe tomorrow)
I am quite happy with the new wing for now and am out of carbon and epoxy so won't make any more for a while.
Top

Today was good conditions for testing, flew Ozone Uno 6m average 16 to 18 knts wind.
Rode Levitaz element stabless for first time and rode my mono foils to compare. Keep in mind my wings are 30 percent bigger than element.
This is what I think .
Levitaz is more unstable at low speed but stability increases with speed, it is faster ( it's smaller and thinner foil section) I like the free turning feeling of element and was not difficult to do 360, toeside tack etc. But had to maintain much more speed. No flying footswitch on element and still difficult to do even with reflex wing.
Sudden pitch change is more controllable than my first wing but more difficult than reflex wing .
What I think I want?
Levitaz element outline shape, flatter tips (like my wing) thin foil semi semetrical section like element ( not flat bottom like mine) but with maybe 2 degrees reflex. Like thinned MH45 airfoil .
Something about 850 sq cm wing area for freeride.
I think also I want to change my board to have less board in front of strut and more in the rear so more even weight to help with strapless foot switches? Lightest possible weight board .

I also tried rodeo today on reflex wing, had to have feet on nose of board to control pitch and butt in exact right place , had to start from sitting on board in the water but rode maybe 50 meters so I think it's possible with more practice.
I would like to try Levitaz cruiser wing but none available to borrow.
The standard element is a great wing to start mono foiling IMO.
I ordered more carbon and epoxy to try new ideas.

Has anyone tried just taking stabilizer off and riding with front wing on the fuselage?

I’m riding Moses 633 Onda on pocket board. Watching Oyvind’s tight carving abilities has me looking for more freedom to really swivel that foil around.
Top

Yes, this is how I rode the Levitaz yesterday, just removed the stab , you will find the foil should be further forward on the board or foot placement further back without stab.
Top

Hi Denisesewa,
thanks again for all the research and sharing. About element, I also think the higher speed is something that even increases sensation, but even if it is allready good for beginning, especially for heavier riders the cruizer is much better and easier, and also a bit more high performance and maybe wider speed window.

And yes your thoughts about a future wings sound also good to me, especially flatter tips is something to look at for surfacing, this is one point where cruzier is worse. Also board weight to the back should help for Food switch.

Riding rodeo on a mono is a real great sign for abilities of you and your reflex wing.

Would be cool to see a video of it and would give me hope to once also ride rodeo on mono.
I think I tried it more than 100 times, but never realy get it, not even with the big Gong wings in the past.

What also would be interesting to find out, how much the reflex lowers glide ratio in comparison to its benefit. But not easy to seriously test without building two similar wings and comparing back to back in upwind.
But as I understand it doesn't feel to bad, not?
Top

If I get rodeo figured out I will take some video, it will take alot of practice I think.
Today I rode small waves maybe 1 meter for first time with reflex wing, this I think is where reflex really shines, very controlled in pitch and so much fun to carve turns feeling the wave power, I also think that reflex helps to control speed to stay on the wave, it is much better for waves than the non reflex wing .
As you say, glide is difficult to compare but it's not so much different to matter to me.( If I can even feel it).
Top Has anyone else tried the Space Skate? I will try. But, can anyone give a good guess whether to take A or B position at the fuselage? That is, mast into the wing as in the picture or wing in front of the mast? The latter might be a bit more stable?

I would use a more forward wing position than what you do in the picture.

As without the stab, the COE moves back, so you have to stand further rear than with the stab mounted.

Thus to obtain somewhat the same balance, the wing should be moved a tad forward IMO.

I have come to conclusion the a slightly rear position of the mast to wing is better, I have one wing with mast @ trailing edge and one 30mm further rear, the further rear seems easier to control high speeds, I think this is because the pitch arc of the board becomes more vertical thus easier for weight shifts to control pitch because of being further behind center of effort/lift of the wing.
Does this make sense? 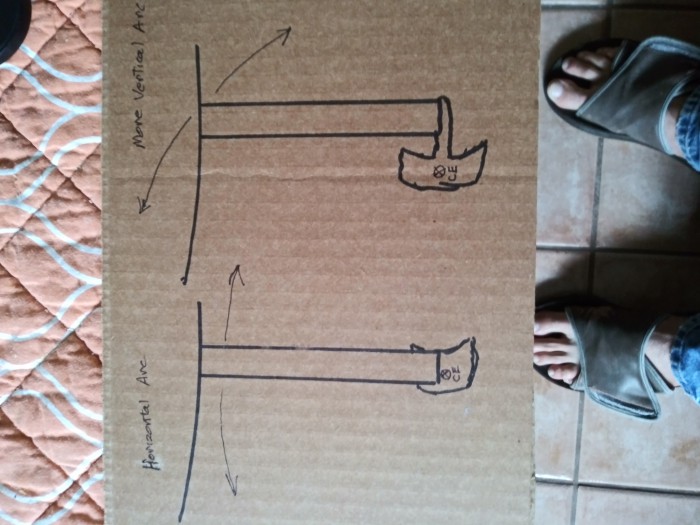