On my China HF, I can replace mast inserts with my own solution.

Even with Alu mast, the risk is loosing a wing...Remember, all bolts snapped on TT foil when the guy hit a sand. Huge force.
Top

You recommend just forget to attach the stab.

I understand that the stab provides the force opposite the one one created by the front wing.. (ie: front wing pushes up and stab pushes down). So both screws attaching the fuselage are probably almost equally loaded? but when you remove the stab, the lift increases and so the front screw now handles all the twisting pressure coming from the front wing and back insert experiences the screw being pulled out of the insert? Basically, what I am asking is: Will the imbalance created by removing the back stab on a from wing like Onda ruin the inserts and damage the mast eventually?

Onda Wing sits quite far forward from the mast. Unlike the front wings you guys ride. The leverage is therefore much larger to pull the inserts out. .

Horst Sergio wrote: ↑
Wed Dec 19, 2018 10:57 pm
@ap888:
No not yet, but more and more people ask me, while finding out is so easy, just forget to mount your stab. But I have no doupts a 1200 cm² Wing especially with the shape of the Onda has to be easy, look at the video from Øyvind what is possible, would espect the ketos and moses 1200 cm² mono are on a similar level for mono.

The bolts do not snap within a flight. We know that.

The bolts snap when the leverage increases suddenly. Whatever that “suddenly” is.

And that must be addressed.

So after reading through this thread and watching the awesome videos I decided to give monofoiling a go.
Given the info shared I built a diy mono for use with a slingshot strut I happen to have, the wing is 570mm span, 200mm root chord, 50mm anhedral, 24mm thick @ 30 percent chord, flat bottom with aprox 2 degrees washout @ tips, aprox 950 sq cm.
This is a larger version of my diy foils I have been riding for the past 3 years.
In retrospect I think maybe I made a mistake with the straight trailing edge as I think maybe a curved trailing edge may increase stability by having the tips further back than the root?
I finished the build this morning and if the wind comes up I'll try it this afternoon.
of course the main problem is I have zero experience monofoiling so I won't know if it's a bad design or if It's my lack of experience but I won't give up easily.
A friend has a Levitaz element so at some point I may get to try it without the stab so I will get a comparison, the idea of building one from scratch is that I can easily modify it once I understand what I want to feel.
Wish me luck! 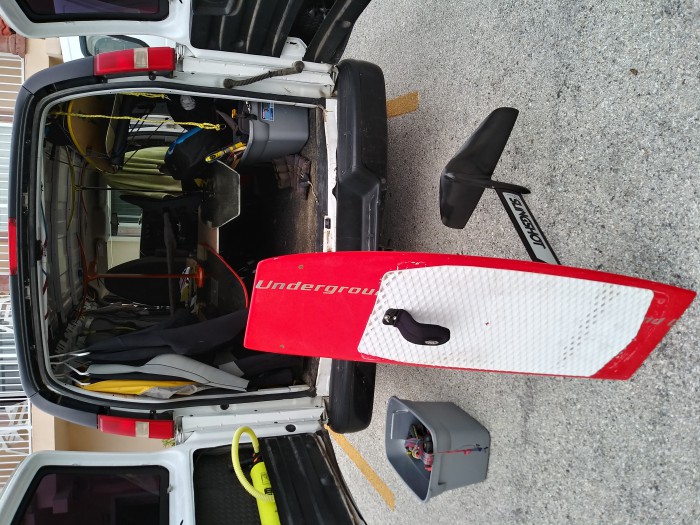 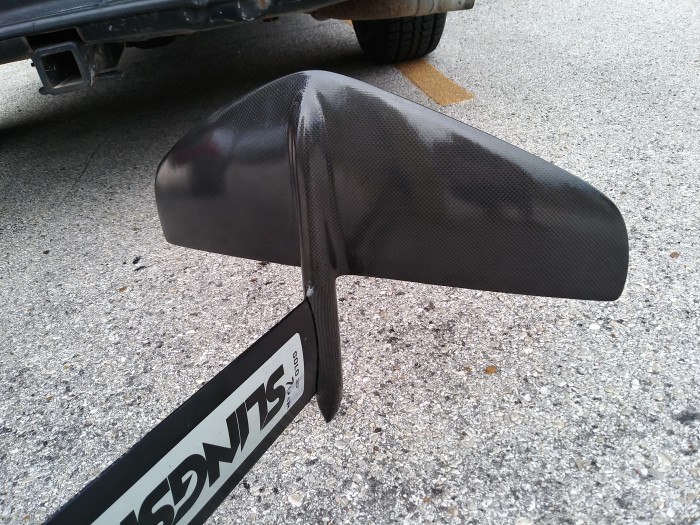 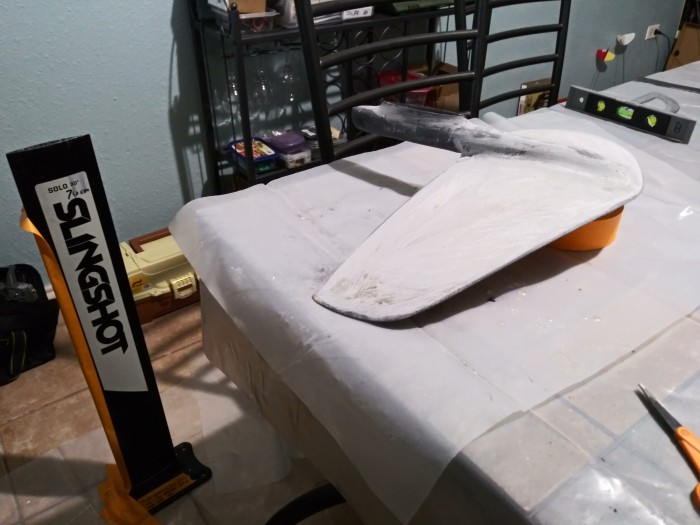 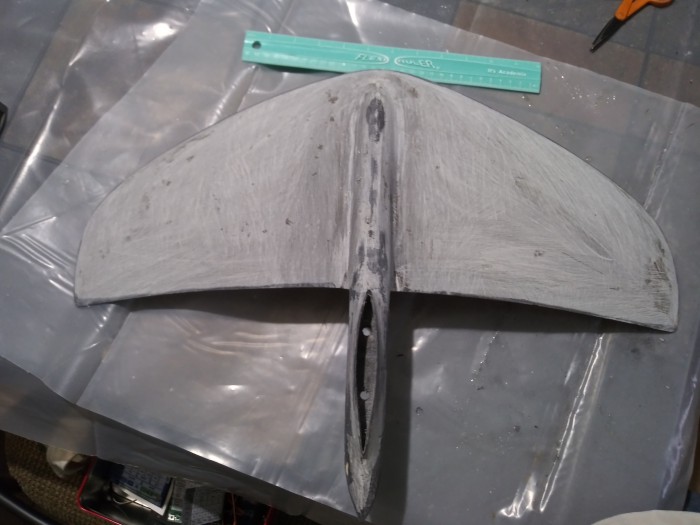 I am happy to report that my mono works just fine, much better than expected actually, took about 5 minutes to get a start and figure out where my feet needed to be, after that I could ride unlimited distance on my strong side and my strong toeside, took a bit to figure it out on my weaker side, jibe to toeside on foil but crashed or touched down shortly after all except once, jibe from toeside to healside no real problem, only had 30 to 45 minute session in 8 to 10 knots then the wind died.
I found it almost impossible to get a start and keep the board on the water although breaching and touchdowns were controllable.
Looks like this will be my go to foil for flat water since I get kinda bored when waves aren't breaking.
Can't wait to put some real time on it.
Top

What's the white stuff and your wing/fuse core?

I'm thinkin to build the same, and got the alu mast already...
Top

The wing Core is laminated 3mm Baltic birch ply, the white is just epoxy & micro balloon surface filler prior to carbon fiber and the fuse I made from a hickory hatchet handle with carbon sleeving. 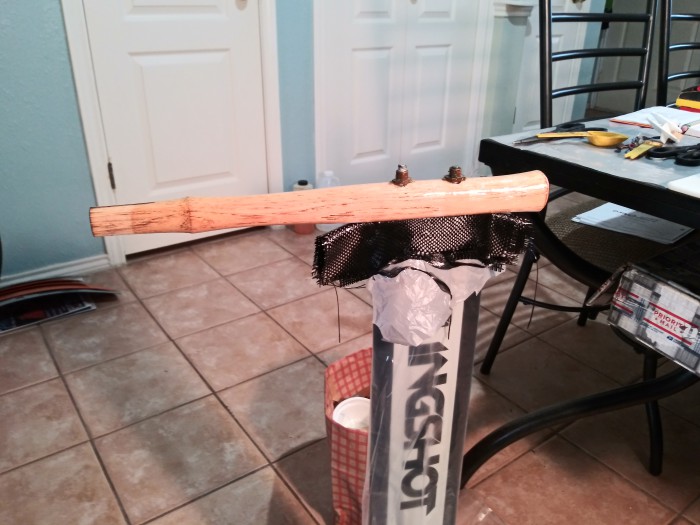 There is a thread on here in the foil builders section which explains how I make budget low tech foils , after several years of refining they work as well as anything I've ridden.
Of course that's just my opinion .

@flying grandpa
Hi Tadeusz, I think what you said is more or less what I also feel. I control speed same as on a normal foil by course and kite position. The named 80 cm (span) foil from Gong was not directly to big for my 63 kg, but hard to start with small pocket boards. I will experiment with big wings a bit more, as I think in their case the usage as monofoil, could reach higher speeds than with a stabi, which pushs the wing into high AoA position, all in respect to their overall low speedrange for sure.
But apart from this and maybe some wave and pumping experiments for me small wings are more interesting, as more speed, lively, adrenalin and also easier to go faster and therefore also jump higher. At speeds small wings profit to create not as much extra lift as big wings when pitching up to much, so you have a chance to push front foot down again, before the for big wings pretty violent front food pressure overwhelms you.

@fun2kite & downunder:
Don't worry, all forces at all components will always be significant lower on a monofoil including also all possible fails, due to several effects, mostly already described.

@ronnie: Thanks for great explanation

There is maybe just one small effect against structure stability:
A monofoil is a bit more sensible to flexible parts, especially boards and wingtips. But on the end all parts which have been noticed as too flexible has been also seen as bad for stabifoiling. The biggest difference is that on a monofoil you can more clearly name the bad parts, as I can with some to soft boards/worn board fundaments and coming to wings for sure the kite foil 65 cm wing from Gong, which you just have to take in hand to see, that it is thin (ca. 15 mm glass and carbon) and therefore to soft at this span.

Great work, I think you build the worlds first monofoil only wing

And it looks pretty much perfect to me.
A few small things maybe could be improved:
- If you start to ride faster try to put the strut more forward under the board, you will feel this when bending your back leg more and more at speeds which costs force
- the end of the fuse being a bit longer reduced in a flatter angle could create a bit less drag, but this part is always a compromise, my idea is to use added ends out of softer materials that can be exchanged, when worn after putting them on the ground as in your picture.

Try to find somebody to buy your old foils, as it could happend that you never want to go back

Hi Horst , you are right , after the first session I moved my foothook back 25 mm and the mast 25mm forward, much better with near even foot pressure. yesterday I had a better session in 12 to 14 knots with gentle swell, I managed several 360's and one toeside 360 on foil, still no footswitch while flying but it will happen.
I blame you for all this fun !
I just finished making a new backpack camera so maybe get some video after all the storms go by.
Top
Post Reply
308 posts