@ Denisesewa
Thank you for sharing your experiments outcomes.
I am especially interested in your opinion about foil reflex.
As a monofoil rider you are a supercomputer!!!
Keep in mind that CoG is 2m above monofoil, so the setup is highly unstable in many ways and you are good enough to control pitch, direction, hight both for monofoil and for kite in changing wind speed/direction and waves.
There is no computer powerfull enough to do that until now. Not to mention to built a new monofoil wing!!! Planes are usually more/less selfstable so it is easier to control them by computers.

@ Horst Sergio
Your roll tacks looks as they are really simple and easy. You’ve done 1000 of them untill now or more?
At 18 second of your movie there is a nice and strong tip vortex filled with air.
I will try some pumping towed behind a boat when my lake unfreezes.
What setup do you have in mind here -„freerace setup with a more symetrical wing with less camber and less cord does have this behaviour much less than the low AR higher cambered wing” What foil you use in this setup?

So I just got a short session with the reflex wing before the wind died, it does have a positive effect , not as much as I expected but my stance is a bit further forward and sudden pitch change is slowed down, it works well enough that I will build a fusalage for it so to have a fair comparison with the non reflex wing.
I also tried to open my stance ( more like race stance) and that has a big effect on controlling pitch.
Only 45 minutes riding today but things are looking good.

Interesting day, I was able to ride reflex and standard monofoils back to back in rough water and Gusty winds conditions (16 to 23 knts), The reflex foil really worked well and I managed first flying foot switch, the standard mono was difficult and I did not come close to switching feet.
After a couple hours I rode my stabi foil for the first time since starting mono, so odd, I wasn't comfortable and didn't like it for the first 15 minutes, so much drag and feeling everything in rough water

. it looks like monofoil is my future for everything except waves.
Started making fusalage for reflex wing to go on carbon MHL strut.

Please post photo when done as well as on, in the H2o results.
THX
rh
Top

This is interesting Denise, and I remember having had the same discussion long time ago on the forum, but not many listened back then...

For most people, including me, the stabless normal wing is too lively and unstable and I lose the lovely carving and driving feel somewhat.
REALLY fun just for "doing it" though ha haa, a great experience

You write you dont think it works well for riding waves, why not? (although I agree)

Then we got the "not mortals" like Horst and Oyvind who just blasts along playing, soooo great!


A couple of comments:

Yes, using S (or "reflex") cambered wings would be the best choice I think.

It is a compromise between some lift and still stability (positive pitching moment coefficient), and the best part of it is, you can ride really fast at low AOA, or slow at higher AOA with low drag.

Another way to obtain the same stability, but with a lot more lift and performance, would be to have a really backswept wing with washout in the very tips.
It can also have a neutral or positive pitching moment, and more lift/camber and because of the vortex'es be very lifting compared to the lower efficiency S camber.
BUT, it will only work at lower speeds, as at higher speeds it will be draggy, because the wing ride at different AOA's throughout the wing when overall AOA is close to zero (= higher speed), so not a good solution I think

On the other hand, maybe when we are many who likes to ride around turning and hardly never ride fast, it might work too?


Regarding the dynamics, if everything else is equal (and only practical tests can reveal), the wing has to be positioned even further forward of the mast on a stabless, as you move both the wing COE forward when having neutral or positive pitching moment coefficient, but also the total COE will be moved even more forward, thus to have the same balance and effect of the mast, the wing has to be even more forward, compared to a regular hydrofoil.
Or easier to understand: When you remove your stab, you have to stand further back on your board, thus you should have the wing moved forward relative to the mast, if you should stand in the same place and have the same lever to the horizontal COE of the mast.

Thus, having the wing directly under the mast, wont be any good IMO, and the wing should as said be even further forward than on a stabilizer hydrofoil, for the same effect in turns and feel when going straight.
Has to be tested though, so some have to move the wings back and fourth a lot, in many different configurations, to find out what works - just like it has been done on "normal" kite hydrofoils the last 10 years.

Just a sidenote though, as moving it a tad forward and using a reflex profile (S camber) WILL work of course, so could be interesting to go further into this, because of simplicity

As you correctly compare Denise, we control the foil in a similar way to a computercontrolled instable fighter to some extent yes.
Also, being on a longer mast high over the wing, we actually GAIN some time to react, odd but true.

Center of gravity normal flight "self" stability from planes do not apply the same way in hydrofoils, but many other factors are the same.

Having said that, I still personally believe that super small stabs are the most efficient for getting a really lively foil, still having pleasant stability and driving feel in turns, but only my personal gut feel and experience from trying stabless a few times, and aerodynamics, even though the latter are not fully the same, agree.

The feel when riding stabless versus stabilizer can maybe somewhat be compared to riding a board without fins, versus one with fins?

Some like playing around on finless skimboards, others like the driving feel of the fins (I hate riding finless myself, but some love it)

That was some thoughts on this

Great you go this way Denise, testing what we know from planes, and see how much works or not, as the balance dynamics are so different, and it is all about FEEL and what we as humans like the best and our bodies can learn to master


You write you dont think it works well for riding waves, why not? (although I agree)

Then we got the "not mortals" like Horst and Oyvind who just blasts along playing, soooo great


Great you go this way Denise, testing what we know from planes, and see how much works or not, as the balance dynamics are so different, and it is all about FEEL and what we as humans like the best and our bodies can learn to master

Hey PF
It is all very interesting to think about..
For me riding waves is about graceful carving , feeling the energy and simulating what I grew up doing on a surfboard. I was never a slash and pump type surfer, for me stabi is the way to find this feeling, mono is too nervous ( at least for now).

Horst and Oyvind skills will show us all what is possible, most of us will never catch up ( I'm too old anyway) I only have desire to find the most enjoyment and fun " for me ". I love that they show us Superman possibility otherwise we would not know it's possible.

The problem in development for me is I don't know what others feel in their different wings so discussion is difficult, I can only compare to what I have, is my reflex wing even as good as Levitaz or Ketos? It's better than my non reflex wing but maybe my wing is junk ? Maybe not,
I don't have the money to buy and try these other wings and distance is too much to ask Horst or Oyvind to try mine so we can discuss things on same level, and then the problem of what feels good to one person may not to another person. Maybe in March I can try a Levitaz element wing when my friend comes here, then maybe I will know something.
What is needed is for others who are smarter and better riders to start development with monowing design. Until then I can only share what I find wether it is of any usefulness or not.
As for a wing with alot of sweep, we know that when in turns the direction of flow over one half (outside wing) will see more lift and more drag and the other half much less, as seen in combat wings this creates ossilations , in my mind this is difficult to counter without creating even more drag.
Untill commercial interest starts this is going to go very slow.
" D"

Peter Frank in a thread: viewtopic.php?f=196&t=2401911&start=10 wrote:
„Camber (meaning the "average" curve a line between the top and bottom of the wing got) is almost solely decisive for the max lift.

Meaning, if you have a very very thin curved wing, like a seagull wing can be, it will have the most lift and quite low drag too when riding at high lift.
It can not operate at low AOA's very well though, extreme drag here so going fast is impossible.
And also quite big stabs needed as the moment of torque is the "worst" on these.”

Reflex wings have small positive moment of torque, helping monofoil rider to manage pitch stability.
There are many of them. Some have small, other have bigger moment of torque.
Wing with biggest positive torque should be best for mono.
Last edited by flying grandpa on Sun Feb 03, 2019 4:23 pm, edited 1 time in total.
Top

This morning I finished the new fusalage for the reflex wing, I also borrowed my friends Levitaz so now I can test original, reflex and Levitaz element wing back to back.
All I need now is wind. 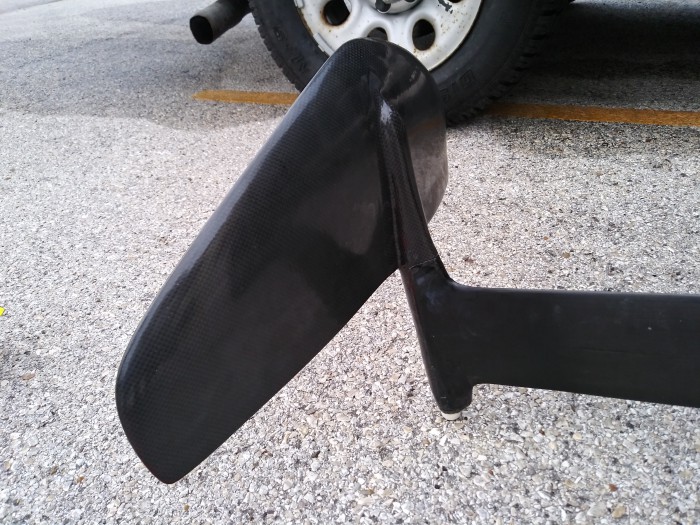 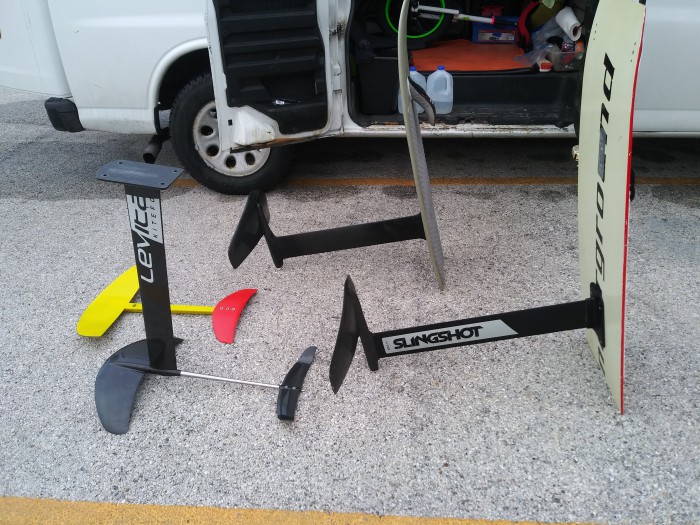 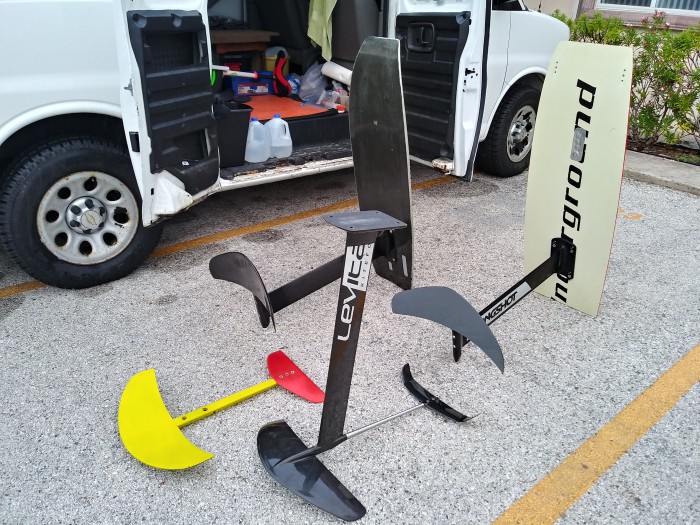 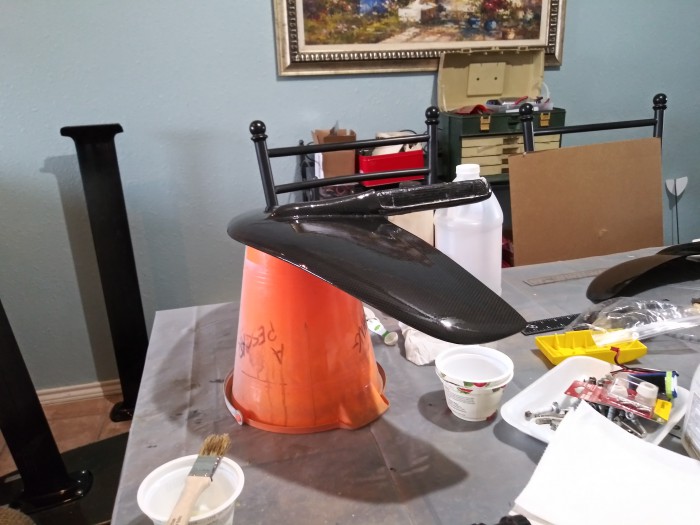 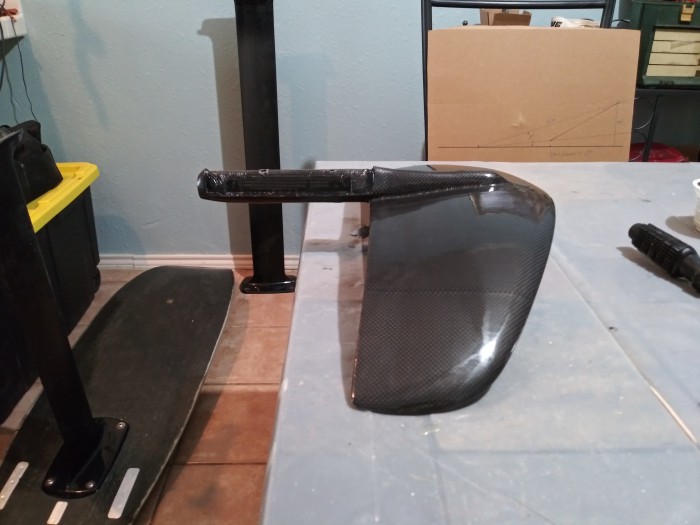 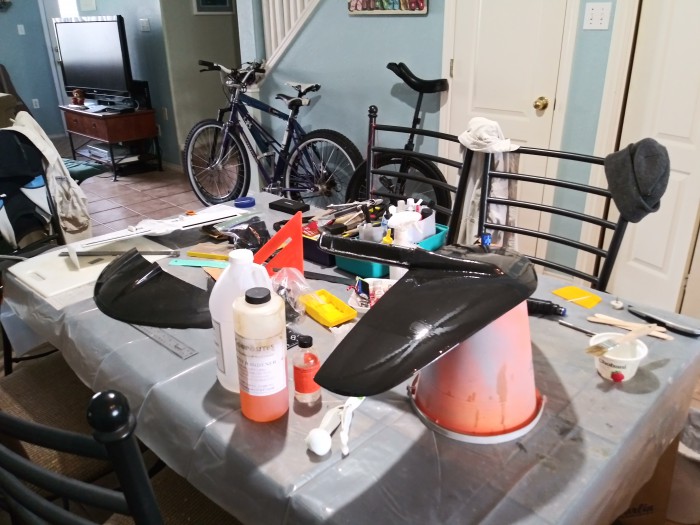