What about using a smaller stab t.ex half the size, instead of moving it forward still big?

Easier to do than make a new fuselage, unless it is a square rod.

Would also give extreme liveliness, but less drag and not be in the turbulent wake from the main wing.

I think a bit shorter fuselage than most, with a much smaller stab, would be the best overall solution

Another alternative to Mono with a small stabiliser might be a Canard design? Nicolas seems to prefer the Spitfire XXLW for surfing and SUP. He has been using the XXLW with a wing.

Quote from a French Forum.
Hello

in windsurf mode, no need for too big, otherwise we lose the player side, in this case the 950 home carver for example is really top wave sail (it's the config on windfoil video)
for the wings, it takes a lot bigger because it is much more difficult with a wing to generate speed.
But be careful according to the templates, according to my preference not too big either.
If you do 100Kg, of course take the largest possible foil, for my part I take foils very elongated and with little surface 1300-1600cm² (I'm 82kg right now) and in this case we have the speed and fun.
I took a lot of time to put myself in the wing, because I tried with big foils at the beginning (2000 to 2500cm²), and I really did not like this side slow, sanitized, basically the foil without the 'adrenaline. But now with so-called fast foils (Zeeko's spitfire XXLW or signature albatross 210) it's a treat, but it does require more coordination for starting (pumping with the wing and foil at the same time). In 6m I go to 14nds and more than 30nds without problem.

And from the Zeeko forum - Nicolas saying the Spitfire works very well with a wing.
Hi hello,

yes, I tried a lot of configurations,
A question, what do you call freerace?
The winglets, it works well on the rear wing, I do not like at all on the front wing of the spitfire because it locks the foil too yaw.
At the back is more interesting. The program of the spitfire is the maximum maneuverability that is why the wings are not drawn with winglets.

For the windfoil duck mode, we did tests with very good riders (world class windsurfing) and windsurfing is really a special case with the foot of mast that supports in front, and it completely changes the geometry and the foil is less interesting in windfoil.

By cons it works very well with a wing.

If your fuselage is shaped for the wing, then taking it off or getting a smaller wing are the two best options. The smaller wing idea was discussed earlier in this thread, so I assumed people were aware of that option. I was just adding another to the list.

I originally bolted the back wing on my surf mono as a joke. I really didn't expect it to work. The bolt holes just happened to line up with the mast. To my surprise, the mast and front wing wash didn't affect it. I attributed that good outcome to the lower position of the wing, so I drilled and tapped new holes (flat mount wing) and made it a trainer monofoil.

When cutting my second carbon fuselage for mono, I decided to leave it a little longer to stop the turbulence caused by having the end too short. The LP back wing bolts on top, so I thought for sure it wouldn't work. But why not try it--just two extra holes on top. Again, it works just fine. I think for surf foiling without a kite it'd be fun too. But that's for another person to try.

The extra bonus is not having a long fuselage sticking out; one of the nice things about riding mono.

Lots of ways to have fun foiling. Enjoy!

I like the idea of having the stab under the mast, maybe trailing edges aligned foilfun

No fuselage sticking out, much better turning dynamics with the front wing quite forward of the mast, and not under or too close. 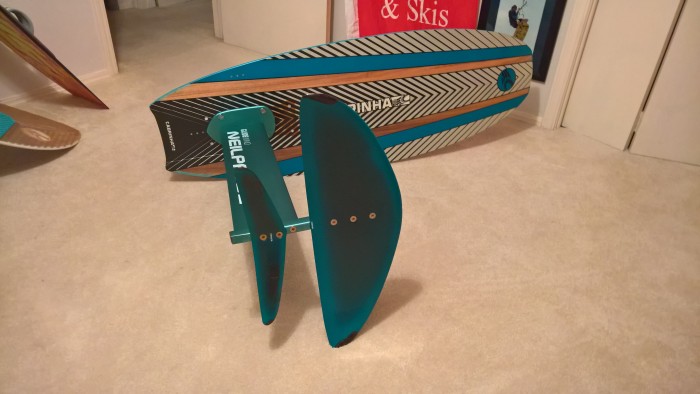 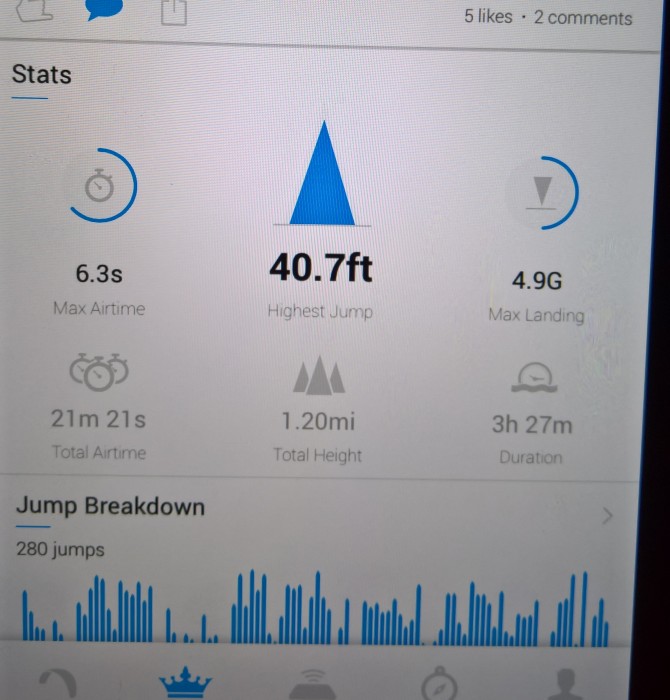 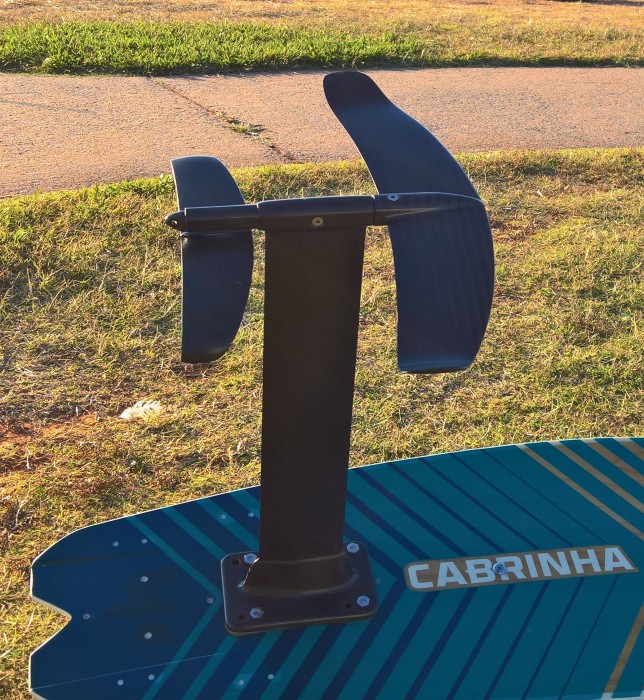 I am with both of you, but personaly I would prefer the normal length fuselage + extremly small stab solution over the other way around, as it is closer to the main magic of very low drag, even if it means to have the higher weight and the spiky long tail.

On the other hand I see both setups more as a step in between on the way to pure monofoiling which also for me stayed for now about 3 years, but seemed to end now, as I am close to sell all my stabis as I just can't stand the drag they all cause anymore. Even the one of the super tiny one shown here:
viewtopic.php?f=196&t=2393935&start=62

To me advantages of stabis have melted down to just:
+++ riding sitting and doing the canery man
+ a bit higher speeds for long distance and a bit jumping high
+ a bit better pumping partly consumed by the extra drag


thats it and easier to say it this way around than listening the close to 100 points where to me pure monofoiling is better. Last try with the shown tiny stabi I had, even the bit higher jumping was no more fun than to do it with the freedom, lightness better landings and lower risk of a monofoil.


Apart from that, biggest problem for monofoiling stays:

It's hard to find kites smaller than 2,5 m² for normal winds

... if not yet seen in the foil kite section:

I agree the mono is more fun. But in certain conditions adding a stubby rear wing can be nice. Indeed your wing was very small, but it still has a lot of leverage on the long fuselage. Have you tried a stubby? I don't even need to move my mast position. That's how little leverage it has. Like mono, I'm sure some will refuse to try it because . . .


somebody? what is expert opinion here? Delta is quite respected

foilfun wrote: ↑
Mon Oct 21, 2019 10:49 pm
I agree the mono is more fun. But in certain conditions adding a stubby rear wing can be nice. Indeed your wing was very small, but it still has a lot of leverage on the long fuselage. Have you tried a stubby? I don't even need to move my mast position...

Also the leverage of the XXS stab with normal fuselage is so small that difference of pressure point is not much more than 1 cm and I also don't need to move strut. Haven't tried stubby, but I would be afraid of the drag that stays which is 60% of the reason to ride mono. On the other hand I like the ability of yours to have a nearly 100% perfect mono mode but close just be screwing the back wing also a trainer mode. I have also a fuselage elongation to add to the mono but with 3 screws it requires more time to add. I think the ability to switch fast inbetween both modes could bring a lot of people to monofoils. There are also a few brands who have this ability, not basicly designed for mono but just a fuselage in two parts for example fone for their "Gravity" Front wings with stuby fuselage one piece and others in the past.

@tomtom
Very cool.
Who is the first manufacturer to offer a serial monofoil option? The honor goes to George from www.deltahydrofoil.com

But as I see he just build an mono fuselage, not yet a wing specific designed for monofoiling as ketos has it around as proto since quite a while. So still posible to be first here.
When I first saw the wing I thought 1500 cm² and to offer it also as wake foil is not such a good idea as 1500 cm² for most kitefoilers can be already to big and wake foiling with a mono could be quite difficult. But when I saw his video I was quite impressed, even if not knowing the proportion of the skill of the rider and the foil. And even if never have seen somebody pumping a monofoil from outside, just knowing what I try, it looks pretty well performing for that. Would be interesting to see if he already can pump it without external impulse over a longer way.

Last days I have been out myself with a 1500 cm² monofoil and Peak4 5 m² in very gusty an low wind conditions. My GONG "M" wing is a bit fat and slow for that and my weight but for anybody a bit heavier and if the wing is more slim it could be also a nice combo to start into freeride monofoil kiting. Also the other guy at my lake with his 1250 cm² duotone mono now starts to be very happy. Actually depending from weight and wing thickness I would recommend 1000 - 1400 cm² as a first mono wing. I ride my 1000 cm² Levitaz Cruizer a lot for light wind and kite wave riding.
Top

A few basic questions for those experienced monofoilers. For an experienced foiler, I am sure I can learn to monofoil with enough effort but how hard is it to go back and forth between riding with and without stab? And what about waves and monofoiling? Anyone doing is successfully? Thanks.
Top
Post Reply
341 posts