Horst Sergio wrote: ↑
Sun Feb 16, 2020 4:46 pm
After having tried also a lot other big wings I think the old gong wings (mostly "M" used and shown) are good for monofoiling as being big but it seem there are significant better wing shapes especially for monofoiling, as for sure Moses Onda but also Duotones big ones. Actually not enough motivation to invest into a new M pro wing. But if anybody is interested to buy my old convertible fuselage with wings, maybe I will go for it and build a new convertible fuselage, even if the actual works pretty good.

Is the W633 one of the nicer foils to monofoil then? Looking to get into trying stabless, looks fun

Just remove your stab, step some inches further back on the board, and see if it's for you - but you have to use some time for muscle memory to adapt, before you can know

Peter_Frank wrote: ↑
Tue Feb 02, 2021 9:01 pm
Just remove your stab, step some inches further back on the board, and see if it's for you - but you have to use some time for muscle memory to adapt, before you can know

Tried today with my Gong M pro, worked pretty well but was quite unstable. Very quick turns though. Had a pretty big tendency for nose to go down when picking up speed. All in all enjoyable! No flying footswitches yet

Nice!
And yes, it is the very "art" of stabless, the pitching moment will play you some tricks at different speeds, so body has to learn. .

If nothing else, riding stabless will dramatically improve your overall foiling skills. Flying foot switches is very difficult
Top

if you have a Moses Onda 633 try this, it is a much much better mono wing than any Gong wings will be for sure, at least my Gong M Rise and Curve (Pro is not a name of Gong wings, all Gong stuff seems to be "pro"

The only way to find out quality of a wing to me is riding it as a mono. The Gongs are completely unharmonic compared to more expensive wings made with higher development effort as for example from Moses or Levitaz.
Have been riding the Gong M Curve for a while on my inflatable Wingboard due to my only foil with a fitting tuttle connection. First time with my new board and back on my Levitaz Cruizer was like day and night, for sure also a bit fault of the inflatalbe, but I have also tried the Curve on a hardboard.
A well shaped wing may allow you to speed up on a mono up to over 40 km/h without having the tendency to nose dive at certain speeds as you described, this is just a behaviour low quality wings do.
Had to ride quite many wings as mono to find this out for me.

Horst Sergio wrote: ↑
Thu Feb 04, 2021 2:03 am
A well shaped wing may allow you to speed up on a mono up to over 40 km/h without having the tendency to nose dive at certain speeds as you described, this is just a behaviour low quality wings do.
Had to ride quite many wings as mono to find this out for me.

Horst, I think this may be more a relationship of the foil cross section than the build quality or cosmetic finish. I believe Gong use quite a flat underside?

And these characteristics will make it more unstable:
No sweep back to the tips.
Short chord.

For performance I believe you need a foil with around 2:1 top:bottom curvature profile.
For stability without drag penalty you need sweep back to mitigate instability of high aspect ratio.
Something like this: 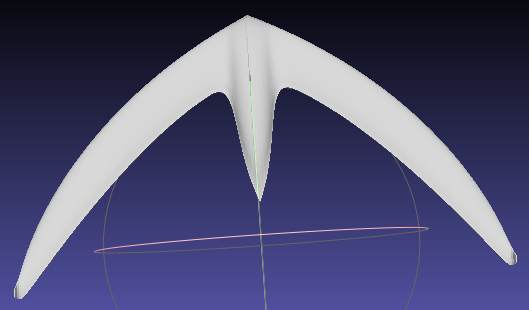 Horst Sergio wrote: ↑
Thu Feb 04, 2021 2:03 am
A well shaped wing may allow you to speed up on a mono up to over 40 km/h without having the tendency to nose dive at certain speeds as you described, this is just a behaviour low quality wings do.
Had to ride quite many wings as mono to find this out for me.


Really? The nose dive with speed is what made me stop further mono experiments. Might try again if I find a wing that doesn’t do that.
Top

grigorib wrote: ↑
Fri Aug 16, 2019 9:01 pm
I can ask Stringy about making custom CNCed monofoil fuselage for 633.
...
The simplest would be a cutoff from existing setup behind the mast. A better one might be mast mounted above the wing and wing trailing edge located behind the mast mount

Hi grigorib,
I would recommend a 633 Monofuse that is shaped like normal or with the strut just a little bit more forward as your previous models, but I would take care to give the "cutted" end a nice hydrodynamic shape by reducing diameter, for example by two planes hitting each other with an sharp angle of around 14° as the strut profile does but not necessarily sharp on the end but well rounded with a radius of about 1-2 mm. So you will achive both a low drag but no extra parts but less parts that may hurt you.

I would not recommend a strut over wing concept for first try:
1. As it just feels additionally to the loose pitch also loose or better to say "different" in yaw and combined roll, which you don't want maybe, especially not for the first year of monofoiling
2. By dismounting the stabi your strut position under the board comes about 3 - 6 cm more foreward anyway, so if additionally putting the strut more about 11 cm more forward over the wing will cause that you need an additional track in your board. (I just have one special customeade board with a so much forward track)
3. With the moses system a strut over wing design could maybe become a bit wide and therefore draggy.


I had today my first try in Wing Monofoiling

(again with the duotone 5 m² Foil wing)
and it was as expected very easy, first 3 starts maybe needed a bit more wind or failt, till I found pressure point, but then everything was the same as my other till now two wing foiling sessions.
Even the jibe nr. 3 was already the first successful. Just foot switching for sure could take quite long to learn without stab, as for that the support of the wing is worse then you are used to have by a kite. After 1/2 hour I started to Jibe, Jibe, Jibe, Jibe in just about 8 m distance like mad and as never done with a kite where even with short lines you can't switch course so quick. It was a real pleasure.

Only drawback this day was a start with my 40 l foil raceboard was not successful, not necessarily impossible, but the moment when I managed to stand on the board pressed under water and with the wing flying over my head there was just to low wind to word the board up to the water surface. So I had to use again the giant around 80 litre old kite raceboard.
Hope to find something significant lighter and jumpable with straps, but in the range of 50-70 litres nearly no big surf foil and also no small SUP foil boards.

Oh and last try was with the XXXXL (old kite race) monofoil board and my 5 m² Peak4 in so little and difficult wind that even the Peak sometimes started to collabse ... unexpected this strange setup worked pretty nice and started with no pull in the loops but also due to the mono was able to turn and react fast enough in some strong gusts.

..also tried the Ozone single skin in comparision, but better not talk about that .. let's say, as this is the wrong topic anyway.

@grigorib did you make a custom fuselage for w633?
Top

For performance I believe you need a foil with around 2:1 top:bottom curvature profile.

Are these statements backed up by any calculations Fluidity? Showing that those changes cause less "dive" with increased speed.
Top
Post Reply
366 posts