Light and Frost is a nonprofit research group interested in developing equipment for the onshore wave riding environment. Previously we developed wave twins for wave riding and alterations in ram air profiles into what we called a death glider mod to provide constant power when moving upwind thru a wave line. These mods were published in forums at the time for general use.

In onshore wave riding the most difficult aspect is beating out thru multiple wave breaks. Upwind ability is therefore paramount.

With the advent of practical hydrofoils designs Light and Frost became interested in the use of hydrofoils in onshore waves due to the extreme upwind ability these foils provide. The concept was to ride out thru the wave line on the board then turn and come in on the foil. The board therefore must have good control in the three aspects of board/hydrofoil operation being no lift, semi lift where the board is just above the water and full hydrofoil lift. A 70 cm and 90 cm curved mast was constructed using wood, glass and only small amounts of carbon fiber to provide stiffness.

To promote mast/hydrofoil control curved masts were developed similiar to the fin on a surfboard. Secondly vortex generators are currently being mounted on the foil and wings. Tests are underway as we speak. For those interested in these concepts examples of one of our test vehicles is seen below. Reference vortex generators, suggest consulting aviation materials as little is found in hydrofoil design. Currently our 70cm test vehicle has vortex generators mounted on only one side of the mast. No control issues have been found and it appears from the limited test conducted that the upwind ability is greater on the side the vortex generators are mounted.

Shortly small vortex generators will be tested on hydrofoil wings 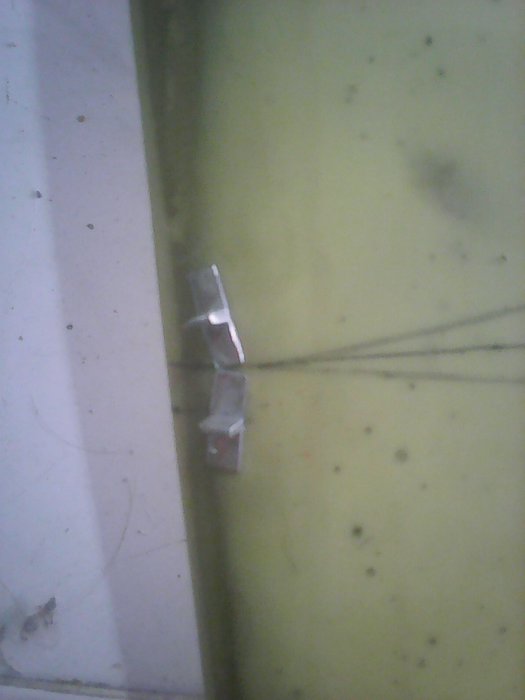 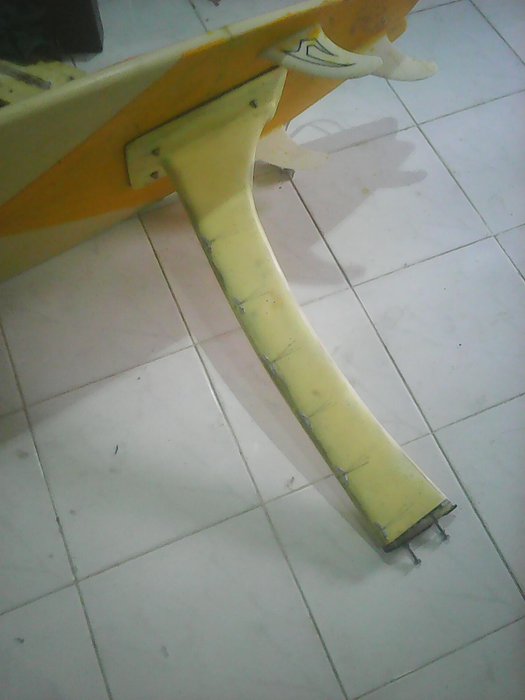 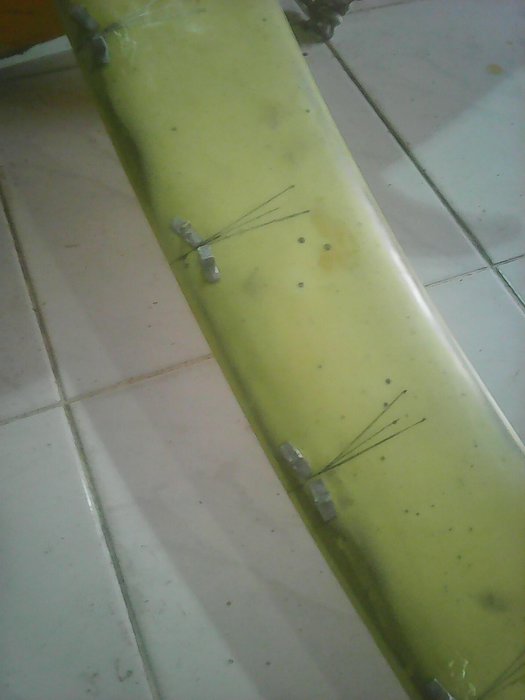 Thoughts:
Apparently your foil goes better upwind on starboard tack than it does on port and you attribute this to the vortex generators on the port side of the mast.

But did you mean faster on starboard or higher to windward or just better vmg either way or did you really measure vmg? How?

Is the foil mounted to the board perfectly aligned longitudinally or does it have a couple degrees play as most plate mounts do?

Is the performance consistent for multiple riders including some who are better on each tack?

How refined is the profile of the mast?
If not awesome, you might see as much or more advantage on one side based on the mast being slightly asymmetrical or not finished the same both sides.
Etc.
Interesting though. Tell us more.
Probably a good idea to make 2 identical setups one with vortex gen both sides and one without, test A ve. B...
Easiest way to test would be buy 2 high quality fast foils and modify one, test back to back. Would cost something but give data people could relate to a meaningful baseline. Without a known reference point like this you might have a hard time convincing people you have something there.
Top

Interesting that the mast is swept w concave facing rear, instead of of facing forwards.

I thought vortex generators were designed to prevent turbulence behind a square-tailed object? For example, behind a tractor trailer truck. Since foils have very streamlined trailing edges, I don't understand the necessity of vortex generators.

I am certainly in favor of trying new hydrodynamic concepts. I would like to see someone try super-cavitation foils, capitation-stopping fins part-way down the mast, and lobed trailing edges (like humpback whale fins)
Top

Vortex generators delay flow separation, which is good for preventing stall at high aoa/low speed, so they say, and can also reduce drag. Typical applications feature larger numbers of smaller generators than shown above, but they are usually a solution empirically fit to an existing design to improve its performance.
It seems plausible they could help to pinch upwind, prevent ventilation, etc in this application.
But if the foil pictured is a one-off, it's hard to be convinced exactly which of its features makes it work well, and which might be neutral or just "along for the ride"
Top

How much does the mast affect the upwind ability? I can see that on a windfoil with the mast vertical there is a lot of lateral forces and lift from the mast and its foil shape and flow could be important. But with the kitefoil inclined so that the rider forces are vertically aligned with the mast, I wonder how much the mast does once the board is leaning over to windward. Or does the kiter twist the whole board and create an angle of attack that way?? I would think a techy racer type who has ridden lots of gear could comment on the upwind ability and the effect of wings vs. the effect of the mast.

Light and Frost tested a 70 cm mast with vortex generators(vg) mounted on both sides of the mast in flat water to extremely rough beach breaks and chop.

First no negative effects were seen. Further comparative tests were run with two(2) Speed II 19 meter kites on flat water. Both kites' line lengths were tuned with larkshead extensions on the lines to return to factory setting and both riders flew both kites to cross-check for kite function. One rider was using a 7ft Naish directional which until the advent of race boards always was the first on the water going upwind as wind speeds increased. During this test wind speed was just enough to fly the kite without constant back stall. The very small surfboard mounted with the 70cm mast, vg and a small wing set ran rings around the 7ft Naish surfboard. This does not prove a positive effect of the vg installed mast but it does show that there were no negative effects. The board was kept in a sub planning mode just off the water with the aft thrusters and tail just touching the water. The 7ft Naish board would hardly move across the water while the small hydrofoil surfboard flew back and forth around the 7ft surfboard. Hence vagaries in wind speed were not a factor as both test vehicles were in close geographic proximity at the same time.

Furthermore the vg seemed to dampen the wobble as the board climbs off the water onto the wings. In several cases in highly overpowered conditions the kite was flown directly overhead. The board climbed off the water surface on the foil and very little foot steering was required to keep the board riding in a straight line.

From the perspective of cost, making these vg is no more expensive then a cup of coffee. A small aluminum Tee-bar was found in an air conditioning shop. The Tee-bar was cut into 0.5 cm sections and shaped with a metal file. The vg were mounted using superglue much like an aviation installation at 10cm intervals. Each vg pair was set at a 15 degree angle to a 90 degree line against the mast. With respect to superglue, the glue was applied in two stages as follows.

To repair dents and cracks in airplane propellers to include surfboard dents, superglue can be used. First fill the dent with superglue, then sprinkle finely ground Sodium Bicarbonate(Baking Soda) on the surface of the glue. The glue instantly hardens 5 times stronger then normal superglue. Next brush off the excess Baking Soda with a brush then file or wet sand. If the void is not filled apply the process again until void has been removed. What is important here is the hardness

If you wish to remove these vg use acetone(nail polish remover) to dissolve the glue.

Currently a 90cm mast is being tested on a heavy 7ft surfboard. The board will be tested without vg then vg will be installed and comparative tests conducted.

Small vg are being designed for the wing. These tests will also follow

Very strange style of semi scientific writing but then using extremely subjective measures and bizarre comparisons like a7 foot directional (WTF) versus a foil.

Maybe someone got grant money to do vortex generator research, and they decided to go kiteboarding? This "research" is just BS they feed to the sponsor (who knows even less than they do) to justify the grant?
Top

First thanks for all the commentary. We will try and answer as we can.

We placed this thread in the general section in the hopes others would experiment.

Light and Frost has no contact with any board/foil/kite manufacturers. We are interested in developing foil/mast/board systems for the extreme onshore rough water wave riding environment.

Respect vortex generator(VG) results; all we can say is we are currently testing.

The comparison with a 7ft surfboard was only to show that we could find no negative effects when VG were placed on the mast.

VG have now been installed onto the leading edge of the front wings and are awaiting wind for further tests. These wings have been ridden hard for over two(2) months. We then applied the VG to the leading edge at 3 cm intervals. We did not remove, repaint of refurbish the wing nor redo the fuselage surface. The fuselage is stainless steel filled with epoxy-silica power mix covered with shrink tubing glued on with rubber cement. If the rubber shrink tubing becomes damaged we simply remove the shrink tubing and glue with thinner, apply another coat of cement and shrink wrap and then gently heat. 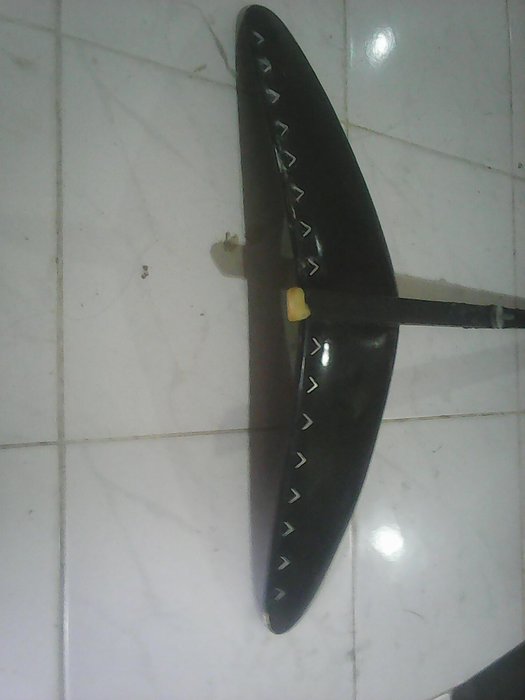 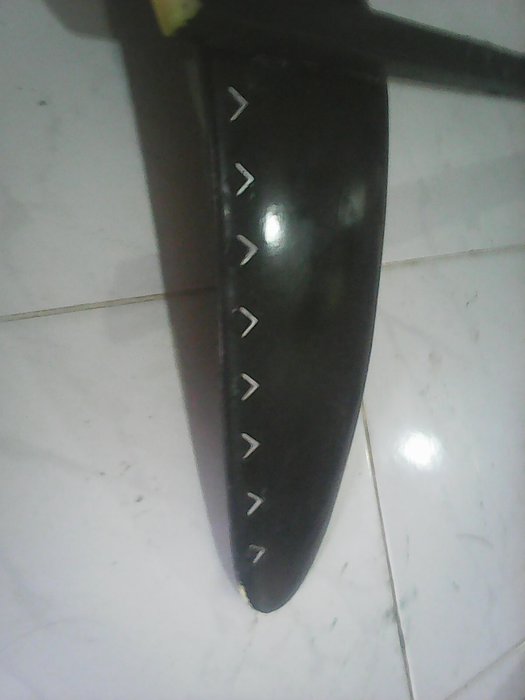