Looks like the only one out there is for Levitaz....generally to protect the way their fuse connects to the wing and mast....
EP 2907737 A1

Frankly I am a bit surprised that such a patent gets granted since the principle of foil underneath a (kite/wind)surfboard was already common at the date of filing.
My Mitu convertible does not differ significantly from a surfboard. So the simple fact that the same setup is used with a different source of propelling power (wave vs wind ) makes it qualify for a patent?
Top

That patent cannot be valid due to prior art.
Top

Peert wrote: ↑
Fri Dec 15, 2017 3:39 pm
Frankly I am a bit surprised that such a patent gets granted since the principle of foil underneath a (kite/wind)surfboard was already common at the date of filing.
My Mitu convertible does not differ significantly from a surfboard. So the simple fact that the same setup is used with a different source of propelling power (wave vs wind ) makes it qualify for a patent?

There might be some details in the patent application that isn't clear here, but if it is as generic as a foil attached to a SUP there is plenty of prior art. One company offered a SUP / Windsurf Foil combo...with a removable foil maybe 3 or so years ago..it was in production then at http://windsurfdeal.com/ with images and pricing. If you search youtube there was a guy SUP foiling waaaaay back.

I would be surprised if that patent held up. The foil was a AHD. http://www.ahd-boards.com/models/afs-1/
I was in contact with a shop who sold them. I remember the price was about $4500. Foil was offered at $2100. 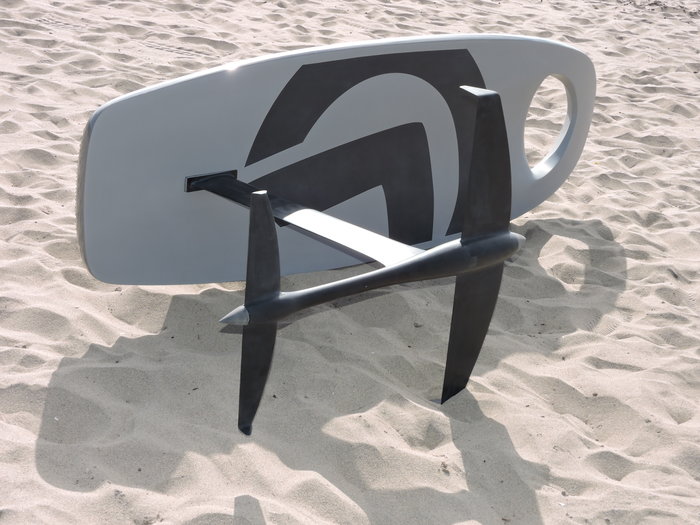 ...here is a video from 2015:
https://www.youtube.com/watch?v=VvBddeogeSE
Top

The gofoil overlaps with several other patents. Sometimes the reviewers just approve patents with overlap....sometimes they dont. I view the patent office as really just a formal library. They really dont protect anything....thats the attorney's job. When someone copies an invention, you can tell the attorney to go look it up - and then go scare them away....The gofoil figure is rather kooky....


Could it effect other patent applications? There wouldn't be any prior art to this, as dodgy as my art skills were!
Top

You can talk about pretty much anything you like in a patent abstract and disclosure. But the only thing that's "patented" is what you outline in the claims. The 9789935 patent has only three independent claims, and they're bizarrely specific. For example, claim 1 requires that the profile of the mast must be widest at exactly the 1/2 chord point. It also says the mast must be between 18 and 30 inches long and that the front wing must have anhedral, a foil thickness of 14 to 17 percent, and that the thickest portion of the foil must be between 20 and 33 percent of the chord. So all you have to do to get around that claim is to be one hair outside *any* of those requirements. The same is true of the other independent claims, and you can't violate a patent without violating one or more of the independent claims.

There are two potential reasons for them to be so specific in their independent claims.
1) They're lousy at writing patents. This happens more than I would expect.
2) They had no choice. The only way to get a patent in light of prior art is for them to thread a very fine needle.

>> do u reckon my idea/drawing is worth anything here...

Worth anything in what way? Do you mean in the sense of patenting it? From the time of public disclosure (e.g. posting it on this forum) you have one year before your option to patent it runs out. Also, the first to file wins. So even if you drew that before someone else patented the idea, you can't patent it. You could potentially invalidate their patent if you can prove your idea was in the public domain before they filed.
Top

Im not an attorney.....but I am involved in a lot of patents. Do you need to be an attorney to submit a patent?

What if someone has a utility patent on your foil?

Create a 'design patent' and claim a different look....MUCH cheaper too....

Agree with Spork on the claims...why write such details when open claims give broader protection?
Top

>> Create a 'design patent' and claim a different look....MUCH cheaper too....