It is time for an update!

How is that foil Tegirinenashi bought working out? Spork rode it once? A bunch?

How is it holding up? Any issues? How much use has it had?

Anyone else using one and happy with it?

Just guessing, but figured Tegir would have said a bit more, but this thread has been crickets for months.
Top

Re JNJ, it has brass inserts for fuse and mast, just like ie WS fins. This is important, u hit the bottom and brass will give away.
Unlike 'embedded' bolts which will snap and stay in the mast. I've seen this happening.

Something to think off when buying a first foil.
Top

Finally tested my JNJ Carbon foil mounted on a 4.8 rocket, note put one credit card shim on the back foil and mounted the foil all the way back on the track. Compared it to a happy foil back to back.
New JNJ foil effortlessy pops up, and is a stable platform, lean into the foil it takes off like a rocket, Jumps well too. Happy foil on the other is skittish and not as stable, not to mention the foil and mast is heavy.
The JNJ foil may not be the lightest Carbon foil out there but for 450$ not bad
Top

No wind and time to try.

So the JNJ is 'raked'. This means the foil I have mast is under quite on angle, top Tuttle view: 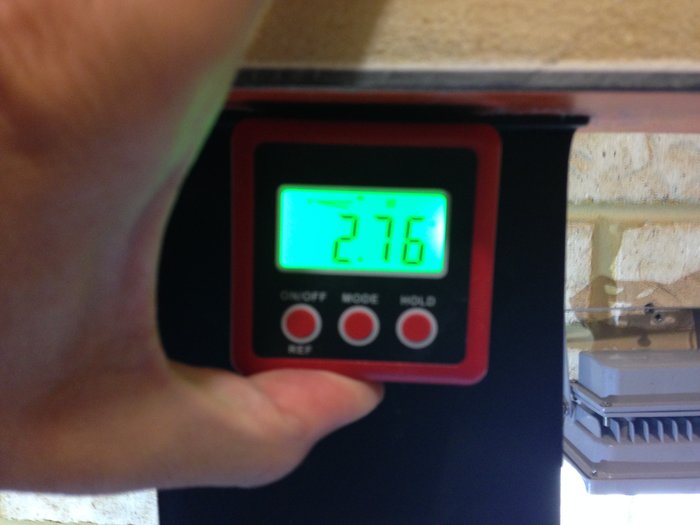 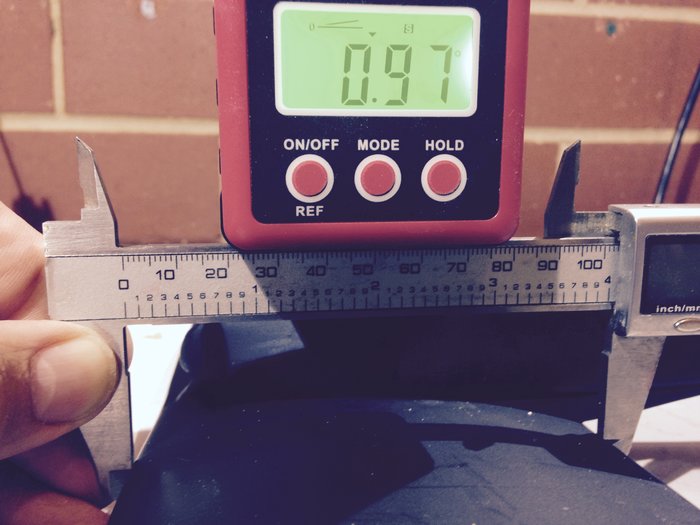 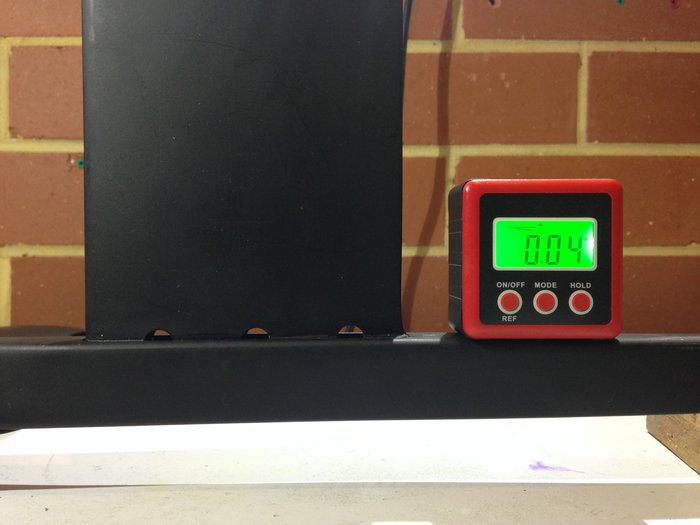 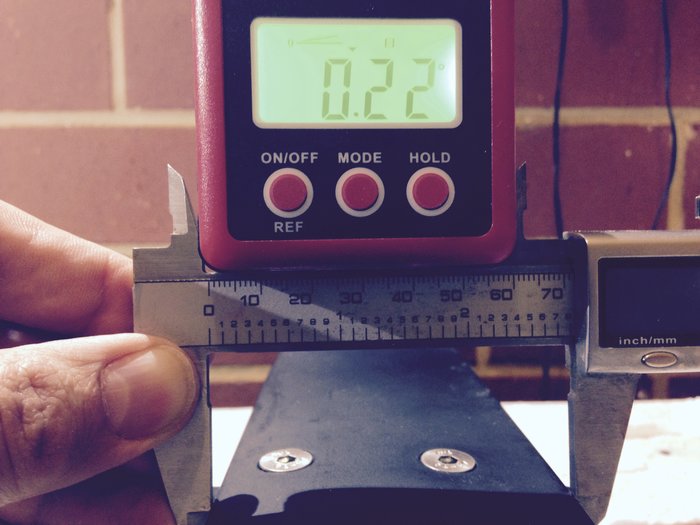 Back wing can be 'shimmed' no probs. Even the front can. But the mast is what it is, unless I build my own Tuttle box (or a plate). The new JNJ might be also raked, so ask them this info b4 u buy. Above poster might know as well.

This is excellent platform for customization, actually I can already mount my own back wing but will rather wait to try first.

jumptheshark wrote: It is time for an update!

How is that foil Tegirinenashi bought working out? Spork rode it once? A bunch?

How is it holding up? Any issues? How much use has it had?

Anyone else using one and happy with it?

Just guessing, but figured Tegir would have said a bit more, but this thread has been crickets for months.

I have the one that Tegirineshi has. Its been a long time waiting on some issues to update. I finally got to put it through its paces.

I bought this at the end of last year after testing lots of foils. Got 2 rides in early season on a new board then Had a problem.
First is you will have to drill holes on the base plate to conform to using other board brands the holes are tiny and will not accept countersunk bolts t nuts for track boards. I ghetto drilled with tape and a drill not super straight cause i Made them glue the mast plate before shipping. Not a big deal they work but not perfect like the nice countersunk factory plates but who cares they go in tight and hold fine.

Next was when my issues started. I know i tightened the wing screws before each ride and remember vividly doing this before the 2nd ride. After 30 minutes i lost the rear wing. After begging and pleading to get another rear wing I got one shipped and took well over a month to get. USPS in Chicago is the gilligans island of packages sat there almost 20 days before moving again. JnJ has been excellent to deal with and always ships fast and does almost any thing you ask them I've been super pleased with the seller.

The inserts or sandwich of a allen nut with a allen bolt that goes through the rear holes are in my opinion not good. The updated version that downunder has looks WAAY better all around. the bolt bottoms out in the nut leaving the rear wing somewhat loose. I bought some more nuts and got JnJ to throw some more in on this last shipment. I'm still getting the bolts loosening up around 4-5 hours of riding. Yesterday I put LOCTITE on them and noticed it loosened up again. I will continue to monitor it and if it does it again im going to the red loctite and making it permanent. (i might try a shim just to get the bolts to crank tighter)

I have had zero issues with the front wing only the rear. the build quality is shockingly really really good for what your getting. I wouldn't hesitate and get another one.

As far as the ride is concerned I'm actually impressed with the speed its faster and smoother then all of the aluminum foils i've acquired. I was keeping up and at times going faster then a ghost whisperer of course I was pushing it hard to see if it has a top end. I think i found it but it could be the gusts it seemed to want to go down at max full speed making me adjust more upward movement on the foil taking me off the speed run.(this could also be my body position as i tend to crouch to try to be more aerodyanmic possibly throwing my weight more forward) You can tell right away on the name brand aluminums when you hit max speed as you want to push it faster and they just wont go beyond a certain point making you want more. The carbons have a top speed but finding the max is tough as you are going so fast you crash it can end up in broken ribs and possibly getting knocked out.

This thing cranks and is very smooth on the transitions. it does have a higher stall speed then my other name brand foils but i expected that with the higher aspect wings. Right now this is now my favorite foil in the quiver. Granted I have tried some highend foils and absolutely love them and can appreciate the quality difference in highend carbons but boy this thing can almost keep up with them at a fraction of the cost.

The mast is taller then most if you dont cut it. which i like long masts I have the north pro foil board with beveled edges and you can lay this down on its side and you can go in circles upwind very sweet foil for the cost.

For the average foiler that doesn't want to drop 2000$ on a ultra high performance carbon this thing rocks in my opinion you get a taste of what they are like. If they come out with some race wings I'd love to try them out. I think with foiling the tech is gonna be all in the wings at this point. Thats why all the brands are offering so many wingsets this year.
Top

Sad to hear the USPS is that bad tho. Sucks big time. I loved Gilligans back in the day

Re your back wing, it might be that your bolts are just not long enough (or thread on inserts in a fuse)? We have a lot of 316 here, they are cheap and I replaced it all.

Craz z"s review of the JNJ carbon foil is dead on, foil is fast and smooth and back fin bolt issue.

One potential problem is the base, If you jump It will crack!

You would think that a .25 in carbon base would hold up, Mine cracked front and back. Ordered a new base from JNJ, and emailed them about beefing the base up, this must be a known issue since they sell just the base. Back to using my home made carbon wings and Aluminum setup while waiting for the base.

downunder wrote: Re your back wing, it might be that your bolts are just not long enough (or thread on inserts in a fuse)? We have a lot of 316 here, they are cheap and I replaced it all.

I think the bolts are too long and need to shortened to clamp down harder. Do you know of any other way to attach the wing? You mentioned inserts I've never messed with composites and i'm kinda afraid of it. do you cut threads with a tap and then put in a insert like a helicoil? Also im kinda green on hardware we dont have a large selection of quality SS. I ended up on amazon and the only thing i could find was what was similar to the JNJ and its for putting furniture together, so I'm assuming they are crap plated junk too.

On the updated foil you have is the mast plate carbon or aluminum? and are the holes larger for countersunk normal size bolts like the name brand track boards? From the pictures the new one looks like several key upgrades but i can't tell much from the picture on their website. I like the fact you can remove the fuse from the mast makes storing and putting a cover on it way easier. And now it comes with a nice bag shoulda waited for this one i guess.

Also judging from the pictures it appears the new one doesn't use the sandwich nut and bolt just a bolt which would make all my loose wing issues go away. On mine I have to use 2 allen keys one on top and bottom of the wing and tighten it as tight as i can and it still wants to walk out even with loctite usually the opposite happens you want to lube the bolts so they don't seize haha.


bay surfer wrote: One potential problem is the base, If you jump It will crack!

You would think that a .25 in carbon base would hold up, Mine cracked front and back. Ordered a new base from JNJ, and emailed them about beefing the base up, this must be a known issue since they sell just the base. Back to using my home made carbon wings and Aluminum setup while waiting for the base.

Oh boy you don't know how tempted I was to just send it at full speed I'm riding with foot hooks and am scared they will snap if I jump. Now that you say the base will crack I won't even try it. some of my friends are doing back flips and big airs on their foils and its so tempting to just throw down. You must be the reason why JNJ put the base part out there I know i'm the reason why they put the rear wing on the part section. Glad i'm not the only one with the issue!

I guess i'll just keep focusing on dancing on the board instead of throwing down big airs like adam withington. Gybing and footswitching is the single most difficult thing i've done so far land about 5 out of 200 trys foiling

Thanks for the heads up bay surfer!