Why not more canards ?

slowboat wrote: ↑
Tue Mar 19, 2019 11:59 am
I have heard people say pitch control at higher speeds is more difficult with them

At 8 minutes Gunnar says what it is like at over 25 knots strapless.

It may be that because the wings have to work together in a particular way to provide pitch stability, there is a range of speed where the pitch is stable, and beyond that range the behaviour is different to what happens with a traditional foil at top speed.

A mention of someone trying the Zeeko Spitfire XLW in waves while on holiday in Fuerteventura.
http://kitefoil.forumactif.org/t4311p37 ... s-reliance

With Philippe, we return from two weeks to Fuerteventura, where we made foil in the waves, and we fed ourselves well!
There were two muscular sessions in Cotillo, with 25/30 knots and 3 meters of waves, and there is no photo, we used a surfkite.
By cons most of the time there were 10/15 knots and 1 to 2m of waves, and it was magical wavefoil, often almost alone.

About ten years ago, I said: When conditions are good I do the board, and the rest of the time, kite. Today is: surfkite when it's good, wavefoil the rest of the time. The difference is that instead of starting to sail at 15 knots, now it's 8 knots, and that multiplies the number of sessions by 2 or 3. (racefoil ride when it's flat, but is rare in Crozon).

Philippe had a Zeeko spitfire XLW (matt cut to 80cm) and me a Frankyfoil (wing 800, short fuselage, micro flat stab, mat 80, 2.2 kg). We could exchange and compare. I found the Zeeko stable, easy, handy, with the enormous quality of not wanting to get out of the water down the wave. Similar lift and radius of curvature. On the other hand mine is much more nervous, the glide is much better, and the speed of rotation much faster, the impression of lightness is incomparable. The Zeeko is perfect to start the wavefoil, then there is more fun, but more technical.
Top

But Gunnar is testing the old small wing, which is not what is used nowadays really, for wave fun.

The XL wing is the preferred one by users, and would be by me too, definitely, as I have only ridden the one in the video.

The canard has a much better, almost impossible to, stall characteristic.

It jumps and lands better and easier.

It turns better when riding waves, with a more natural feel apparently.

I might be inclined to try one again, just with a bigger wing

Dont know about high speed control issues, not mentioned by Gunnar, and even if, it does not matter when riding waves.

A shame others arent making canards, so it could be easy to just buy a new fuselage and two wings for your current hydrofoil

There seems to be a bit of extra work involved to get the XXLW Spitfire to work as a windfoil, so I'm still waiting for that to appear.

If this comes out first though, that could solve the problem and the standard XXLW Spitfire SUP could be used with it. It also seems easier to tack and gybe than other wind power types.


Nicolas does seem to be working hard on developing different versions of the canard, but Zeeko may be more limited in research budget than some of the big companies, but he is the one who showed it could work when others said it couldn't be done. It doesn't seem to pump well, so it seems that using wind power or paddle power is what it suits.

This is a discussion that covers the speed ranges of the small and XLW Spitfires ( I guess the speeds have some relation to the speeds where the foil pitch stability is working, but they are not necessarily the same - especially at the lower end).
http://kitefoil.forumactif.org/t5827p25 ... nav-en-xlw

This is the translated version to English.
https://translate.google.co.uk/translat ... rev=search
Top

I'm not too far from 2 years on the Spitfire XLW, 75cm mast, and I'm still having lots of fun, and no lust for any other foiling gear.
I had another conventional foil that I sold because I wasn't using it anymore.

At the same time, I'm not testing any other foils on the market, so maybe I'm missing out. I imagine that a carbon mast and fuselage would improve the experience, but as I said, I'm happy with my gear for freeriding. I don't care about racing, I don't really try to push the bottom end too much, 10kts, a 12m LEI and a 9m as soon as it's a bit more. Typically back on the surfboard whenever the conditions are good enough for it. But sometimes foiling days on 7, 5.5 or 4m.

I also have the XXLW set of wings that I've used for a while when kiting, but I think it's overkill/restricting for kiting, and the XLW feels faster and more lively, while still having very forgiving slow lift off speed.
The XXLW will be used for prone surf foiling, on the 4'8 Scrambler, but I have yet to start that. It's been a windy season, and I'll wait for the colder months for the crowds to leave the mellow wave spot and get into it.
I'd more than happily recommend the Spitfire XLW to the majority of freeriders, for its simplicity, safety and overall performance.

Similar sentiment here. Spitfire with XLW has been my go to rig for about 18 months or so (standard wings before that). I'm still happy with it, but would like to try something else in waves. XLW is still a bit too fast in waves. I have not noticed any pitch issues at speed, but it is not often that I push for top end.
My beef with XLW is weight and sea-grass collection. I think the straight leading edge on the front wings is more likely to "collect" strands of grass rather then shedding them. Foil then becomes much less predictable.

I’ve been on the XXLW Spitfire for a bit now and for sure it’s fun Kiting with it on 90cm mast.
Also using it on Windfoil.
Also same foil will be used for Sup and Surf but first I have to learn to do them. Take it as read that going out to try with out knowing how to Sup in waves or paddle into and Standup on a board doesn’t work.

I am now starting to miss my std wings
I’m itching to jump and on head high plus swell the XXLW seems too slow and over powers the kite. Or more a balance thing between kite and foil power.
Plus a wave closing out on you sort of begs for some get away speed. 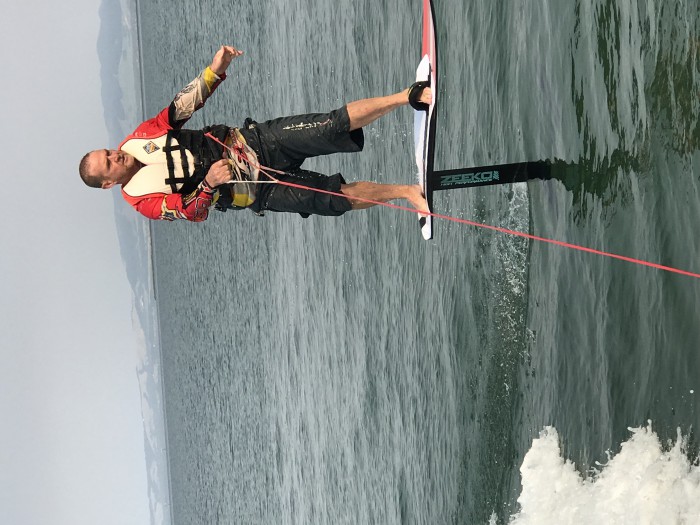 Still the XXLW has progressed my turns learning curve and is fun behind boat.
Next for me is towing into ocean swell.
Top

borist wrote: ↑
Wed Mar 20, 2019 1:54 am
Similar sentiment here. Spitfire with XLW has been my go to rig for about 18 months or so (standard wings before that). I'm still happy with it, but would like to try something else in waves. XLW is still a bit too fast in waves. I have not noticed any pitch issues at speed, but it is not often that I push for top end.
My beef with XLW is weight and sea-grass collection. I think the straight leading edge on the front wings is more likely to "collect" strands of grass rather then shedding them. Foil then becomes much less predictable.

So how do you handle sea grass collecting on the foil? My area has a lot of it and for my surfboard I just ollie to shed them. Would you perform some sort of maneuver to shed them?
Top

I dont have problems with seagrass on the wing, extremely rare eventhough it can happen yes...

It is on the mast, which is A LOT more exposed as in the surface, it is a bugger bigtime here, and one single straw on the mast and you can just as well stop fully, as nothing is fun nomore now with this added drag

And here sweep or anything wont help at all...

So for me, sweep or not does not matter for the wing, in terms of seagrass.

Brand Affiliation: None
Has thanked: 1 time
Been thanked: 7 times

I really liked the Spitfire but hit a wall as far as progression after riding the Spitfire for 6 months. I was pretty much riding toeside the whole time and having a lot of trouble getting flying transitions. I also had issues losing lift on the Spitfire in choppy conditions.

My riding was getting stale so I bought the Cloud 9 S24. I immediately started progressing again - riding switch stance, flying transitions, 360’s, carving turns in the pocket of the wave, etc.

After a few sessions on the S24 I sold the Spitfire. I’m almost a year into the riding the S24 and honestly don’t miss the Spitfire.
Top

What is it you reckon that allowed your progression again? Do you think it's the canard geometry that was limiting you, or mostly the fact that your S24 is significantly bigger? (1126cm2 vs 800cm2 for the XLW)
When I put the bigger XXLW wings, most of the things were initially easier due to extra lift and slower speed required in everything, which made attempts not necessarily as committed and less punishing when screwing up. That definitely contributes to the learning curve.
Top
Post Reply
62 posts

Users browsing this forum: No registered users and 12 guests